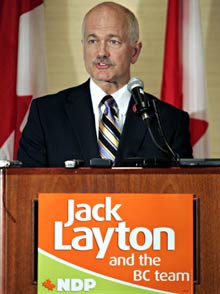 To understand the brilliance of NDP leader Jack Layton’s proposed motion to require Paul Martin to call an election in January instead of next week, you have to understand the tennis match that had been going on between Prime Minister Martin and Opposition Leader Harper in the lead-up.

As the (minor) bombshell of the first Gomery report struck, the Conservatives had to consider whether to try and bring down the government now or wait until Martin’s promised election call in February. Thanks to more democratic trickery on the part of the Liberals, Opposition Days — days when the oppostiion could most easily introduce a motion of non-confidence — were pushed back to next week, meaning that forcing an election then meant taking people to the polls around Christmas. Nobody on the opposition side, it seems, wants to be seen as responsible for calling a Christmas election.

Already burned by the election dance he had last spring, Harper was reluctant to bring down the government in such a fashion. So he made an excuse: I won’t bring down the government unless I have Jack Layton’s support. Meaning: if things go wrong, it’s Jack Layton’s fault. Jack then milked his renewed prominence in parliament for a while longer, but then decided — as Warren Kinsella recommended — to get out of Martin’s “blast radius”. An election was coming in February at the latest, so now was the time to extricate himself from his lucrative deal with the Liberals. But he wisely decided against doing Harper’s dirtywork, remaining coy over whether he’d cooperate on a motion of non-confidence.

Harper pressed the matter, offering the NDP the Conservative’s first Opposition Day in parliament (November 15) to bring in their own motion of non-confidence (“I don’t want to force an election; you force an election!”), but Layton refused to play Harper’s patsy. But then Layton came back with the brilliant plan: introduce a non-binding motion during the NDP’s Opposition Day demanding that Paul Martin call an election during the first week of January, rather than thirty days after the release of Gomery’s second report.

No, it’s not a formal motion of non-confidence. No, it won’t constitutionally force the government to do anything. But in terms of politics, this move is brilliant for a number of reasons:

Best of all, though it doesn’t force Martin to actually do anything, it damns him whether he does anything or not. Martin has a few choices: he can ignore the motion, and get hammered during the February election for being undemocratic; he can try to force the opposition’s hand and bring forward a confidence motion, and get hammered during the Christmas campaign for being the one who pulled the trigger on parliament early, or he can accept the motion and call the election in January.

Strategically, an election campaign in January reduces the length of time Canadians have to forget about Gomery’s report. Gomery’s second report, which is unlikely to be damaging to the Liberals, still reminds voters of the Liberals’ record of corruption. And it also prevents finance minister Ralph Goodale from bribing voters with a juicy election budget laden with tax cuts and spending increases.

The anger that some Liberals have expressed is testament to how much Layton’s move has stung. And Harper is indeed sounding chastened. In this minority parliament, clearly Jack Layton has been the one leader who has done more to work for his constituents, who has tried to rise above childish Liberal/Conservative bickering to make this minority parliament work, and who has proven to be more strategically adept than parties five times his size.

The Canadian blogosphere lost a giant yesterday. Andrew at Bound by Gravity has hung up his keyboard and called it a day.

I was a regular visitor to Andrew’s site, because of the quality of his posts and the intellectual challenge he represented. He was a Red Tory, a staunch supporter of Stephen Harper against Liberal corruption, and a free thinker. He was also highly respectful of everyone who disagreed with him, and as a result he attracted a large base of commentors from across the political spectrum that engaged him, and then each other, in rational, passionate but ultimately respectful debate. Oh, there were trolls, but they were a minority. The rest of the discussion offered considerable hope that, despite the shinenigans of parliament, there was hope that ordinary Canadians, Liberals, NDPers, Conservatives, Blocquists and Greens, could discuss their differences for the good of the nation. It was a real difference from the hate-fests that you sometimes see in less respectful political blogs on both sides of the spectrum.

Having blogged for over three years, I know the challenges of putting up new material day after day, week after week, so I understand why Andrew has decided to give it a rest. I hope he won’t be gone forever, however. The blogosphere could use more level heads like his. So, Andrew: enjoy your rest, recharge your batteries, but don’t be a stranger, okay?

Oh, well. At least we still have Andrew’s mirror image (in political leanings; not in terms of respect for others) Sinister Thoughts.

My First Appearance in a Book (And it’s not the Unwritten Girl)!

Coach House Books is releasing an anthology of essays on Toronto’s future entitled uTOpia. A launch party on November 20, which I doubt I can attend, will celebrate the release.

uTOpia is “an anthology that aims to capture and chronicle the wave of civic pride and enthusiasm that has washed over the city during the past two years. A compendium of pie-in-the-sky speculations and pragmatic suggestions by thirty-four different journalists, artists, thinkers, architects and activists, the book profiles Torontonians like the Zeidler family, a pair of Queen Street gallery owners and a self-proclaimed ‘infrastructure geek’ obsessed with sidewalk stamps, and considers fifties-style strip malls, the TTC, gentrification, crumbling sidewalks, why Toronto is better than Paris, and the perils of a car-free Kensington Market.” (See the full press release here)

I was asked by Coach House Books to contribute to uTOpia thanks to my work on Transit Toronto, so I contributed an article chronicling the frustrating stall in Toronto’s subway development in 1980, and the glimmers of hope that this might change. The piece is accompanied by a wide range of other essays from other more famous Torontonians including Bert Archer, Adam Vaughan, Ninjalicious and many more.

Erin has a Flickr account, which we’re using to make our Vivian photographs available to our friends and family. And that includes you guys. So, if you’re interested in more baby pictures, click here.