Everything I Know about Pregnancy, I Learned by Madly Trying to Forget About Coupling 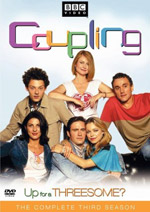 In my (admittedly hastily compiled) opinion, the funniest sitcom of all time is the BBC’s Coupling. Superficially, it’s a sexier, British rip-off of Friends, but in reality it is so much more. Writer Stephen Moffat produces incredible belly laughs by taking six characters, tweaking them well off normal, but keeping them consistent (if odd) people. The jokes are rapid fire and British, and an attempt to duplicate its success on American network television bombed rather spectacularly, but American network television could never be this racy, and that would cut a hole in this series.

One of the many strengths of this series is that Stephen Moffat knows how to write for the battle of the sexes. He ably mines the misconceptions and preconceptions that continue on either side of the divide as men and women live with and love each other, but never really understand each other. In its fourth season, two main characters, Susan and Steven, are expectant parents, and this sexual divide takes on the expectations around pregnancy.

Susan wants a natural childbirth, without so much as an epidural, even though she looks set to deliver an eleven pound whopper. Stephen cannot understand this. “You are going to be in pain!” he rants. “And the doctors are going to offer you pain relief! Which you are going to refuse! Why?!!?” Susan makes Stephen promise to remind her of her decision to go drug free when she (likely) asks for an epidural. Which leads up to the climactic labour scene where Stephen ends up being punched out of the labour room and, when he meekly asks Susan if she really wants drugs the second time, receives the response: “Stephen… Get… me… A F—-ING… EPIDURAL!!!!”

Hilarious stuff. You may just have to take my word for it, or watch it for yourself (all four short seasons are available on DVD), and it is testament to the consistency and humanity of these characters that a lot of their conceptions about pregnancy stuck with some of us (specifically myself and Dan) and had to be shaken loose by reality.

There is a huge gulf between television labour and real labour. For instance, it is the cliche on television that labour begins with the water breaking. You saw it on Murphy Brown, Thirtysomething as well as Coupling and numerous other programs. It’s like a starter’s pistol: “(pop!) And we’re off! Mother number 1 is ahead at three centimeters, but hold on! Here comes Mother number 2 approaching five!”

Oftentimes, the water breaking is one of the last things that happen in actual labour; and occasionally the midwives have to break the membranes themselves. And the decision of the mother to go as drug free as possible is not motivated by some bizarre new-agey motherhood cultlike sentiment, there is another body we have to consider: the drugs not only provide pain relief to the mother, they do pass through the umbilical cord and affect the child.

When I told Dan of our intention of going as drug free as possible, his exact response was “well, that’s just crazy talk.” Spoken like a man who has no idea what childbirth is really like and sees only the pain that women experience (which, to be fair, is the position most men find themselves in, even those at the childbirth). But I was convinced of the benefits of drug free labour when the pre-natal classes showed the differences in the babies born drug-free compared to those who weren’t born drug-free. The drug-free babies were a lot more active, able even to squirm up to the mother’s breast and latch, while the drugged babies were listless.

And while labour, even back labour, is painful and exhausting, it’s manageable. I’m proud to say that Erin managed it. It may have started Tuesday evening and kept us awake all night; I may have spent hours ladelling hot bathwater over Erin’s tummy, but she handled it, and without the complications that set in late Wednesday morning, I’m certain she could have delivered the baby without any drugs.

Erin did have to have an epidural in the end, and she did have to undergo a cesarian-section, and while that wasn’t what we wanted to do, it was in the end a decision we had to make for the good of the baby. And it did make a difference to Vivian during her first days. It took a while for breastfeeding to get established. It didn’t help that Vivian had to be intubated in order to suction out the meconium she aspirated, and that made her reluctant to bring her tongue forward to suckle in the first few days. We were forced to bottle feed in the first few days so she would get the nutrients she required, but we were fortunate; Vivian is smart, and with a little coaching by our midwives, she managed to take to breastfeeding quick.

Parenthood is a 24/7 job, and an exhausting job, but some parts of it have gone better than I expected. I know some people thought I was foolish to go with a cotton diaper service over disposables, but we’re now in our third day of using the diapers of Comfy Cotton and, frankly, they are as convenient and effective as Huggies disposables. And they’re cheaper, put less pressure on our landfills, and place fewer chemicals close to our baby’s skin. If you’re an expectant parent, take it from me: for the early period at least, there is no real difference between using disposables and cotton, except for what I’ve outlined above.

And before I’m struck down by the fates for speaking out of turn, I am aware that I’m talking about the waste producing capabilities of a two-week-old. I may think differently once she’s four months and fourteen pounds.