Why the Liberals May Lose, But Will Never Die

This country is changing.

Sorry, that’s the opening to The Lord of the Rings movie. Now, where was I?

Seriously, I sense a dynasty on the ropes. I sense that most Canadians, including Liberal voters, realize that the current governing party has become tired, complacent, arrogant. Corruption has infiltrated Liberal back rooms and may be sitting on the front benches, and the party is being led by a cadre of individuals for whom power is its own end.

Though the polls have remained pretty much in stasis, much to the consternation of nervous Conservatives; though Jay Currie continues to predict a 50-seat wipeout for the main opposition party, I believe that there is every possibility that the Liberals will see a rout of their own. In fact, I’m going to go out on a limb and predict the next parliament will be aligned as follows:

Under this arrangement, Prime Minister Harper can realize my dream of his governing with the cooperation of the New Democrats.

There are other Conservative supporters out there who trust their noses more than the polls. They foresee a Liberal rout as well, thanks to a weary electorate, a disciplined Conservative campaign and serious Liberal miscues ranging from Scott Reid to Mike Klander to a whole bunch of Chretienite Liberals turning on their Martinite brethren. And more than one of them is predicting the outright death of the Liberal party, saying:

Can it happen? Of course, where is Mulroney’s party?

While I have every expectation that the Liberals will turn in their worst performance since 1988 or even 1984, I am here to caution people against predicting the second death of a mainstream party in under a decade. It won’t happen. Because, as corrupt as they are, the Liberals aren’t the Progressive Conservatives of old. They are made out of entirely different material.

The Liberals have been the natural governing party of the twentieth century because they’ve been able to find the popular and correct path for the nation and follow it. Their critics call them unprincipled, but that’s an oversimplification. The best Liberals are interested in doing the best they can for the country, and the best of them govern with the principle of an open mind. Unfortunately, many Liberals are not pragmatists, but opportunists, following a path that’s popular, but not necessarily in the long term interests in the nation. The voters rewarded them for it regardless, and only punished the Liberals when the party got complacent and alienated too many voters with their arrogance.

By comparison, the Progressive Conservatives have been the natural opposition party by taking in those groups alienated by the Liberals. From Quebec separatists, to rural Ontarians and disaffected Westerners, these groups have had few commonalities other than their dislike of the Liberals, and while that can be enough to put the Conservatives over the top occasionally, it’s often not enough to hold the coalition together when the Conservatives make the hard choices of governing.

Diefenbaker won the biggest landslide victory by bringing Union Nationale Quebeckers into the fold alongside his western base. He then ignored the Quebeckers, lost their vote, and thus his majority. Mulroney followed this strategy as well, and managed to hold the coalition of the disaffected longer. He started to lose the Western base by 1988 when the Reform Party began nipping at his heels, and then — like the dog with two bones — he lost both the West and Quebec in 1993. Those lost votes fell into the hands of regional parties that have never been able to fully rebuild Mulroney’s coalition.

When the Liberals lose the next election, it will be because their constituency got angry, not because they lost their angry constituencies. Canadians are, by and large, pragmatists, centrists and, yes, some of us are simply unprincipled individuals who care more that the country’s economy works instead of the politics behind what made it work. There will always be a demand for a party that is neither too socialist, nor too conservative, who can implement (as opposed to just promise) a tax cut one day, and a new spending program the next. And once the Liberals spend time in the wilderness (two to eight years), and bring forward a leader with an ounce of vision and humility, those voters will come home.

This has been the model followed by other mainstream parties in the provinces whose constituency was not built largely on the disaffected. The Progressive Conservatives lost power in Ontario in 1984 after 42 years, and were routed to a 16-seat rump in 1986; did they die? No; they came back to take power in 1995. In Manitoba, when Howard Pauley’s NDP were reduced from government to third party, did they die? No, Gary Doer led them back to power ten years later. Yes, Alberta doesn’t just defeat governments, it kills them outright, and yes British Columbia lost Social Credit just as Quebec lost Union Nationale, but these are aberrations. Alberta is a province of near-consensus, and British Columbia is deeply polarized. In Saskatchewan, the Saskatchewan Party is Devine Conservative in all but name, and in Newfoundland, the Liberals still managed to claw their way back despite the disaster of Joey Smallwood’s last decade in office.

The only thing that might lead to the outright death of the Liberal party is if the new governing party successfully shifts itself into the Liberals constituency, offering pragmatic government that pleases all of the people some of the time. Some have said that Jack Layton could take the NDP into that territory, but to those individuals I would simply remind them of what happened to Bob Rae when he tried to take his party that far to the right. Likewise, I don’t see the Conservatives able to take their party that far to the left without a complete purge of their social conservatives, who won’t go quietly.

So even if the Liberals are routed worse than what I predict, you can rest assured that, in five or ten years time, they will be back, just in time to take over when the old government is ready to be replaced. The good news is, they will serve Canadians better than they do now.

At least, until ten years later, when the time will come to rout them again.

Thought you’d enjoy this picture taken during my trip of a sunset just outside Platte, South Dakota. 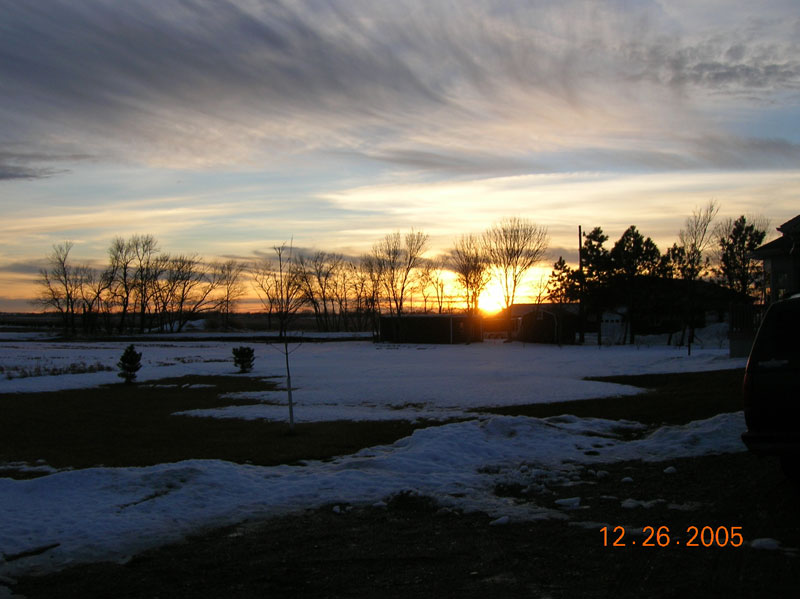 More pictures of our Christmas trip can be found here.