Are the Cylons Half Human? 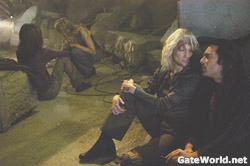 The latest Battlestar Galactica episode Downloaded was a fascinating tale that refreshingly changed the pace on a season that had begun to tread water. Since the mini-series, we had known that the Cylons were able to download their memories into a new body each time a unit died. With Scar we learned that this ability extended even to the Cylon fighters, but Downloaded allowed the series to finally explore this ability in detail, by focusing on Number 6 after she died saving Gaius Baltar in the mini-series, and Sharon (Number 8) after she died in revenge for her assassination attempt on Commander Adama at the end of season one.

They are brought back to Cylon Occupied Capra-couver, which is, amazingly, being rebuilt for Cylon-cum-human habitation. We have some nicely creepy images of Cylon Centurions replanting trees, and the many copies of the known Cylon models walking the streets and interacting with each other in cafes. The resurrected Sharon and Number 6 are hailed as war heros — bizarre celebrities that manage to stand out among a population that has only six known faces.

Let’s get one nitpick out of the way, though. Downloaded suffered from the fact that Battlestar Galactica can no longer count on the services of Callum Keith Rennie to provide even a cameo, or for that matter, Rick Worthy (Simon, the Cylon doctor from The Farm). The fact that Cylon Occupied Caprica is now populated by Lucy Lawlesses (Number 3), Sixes, Sharons (Eight) and Leisure Suit Larrys (Five) stretches credibility a bit. I guess the Callum Keith Rennies and the Simon’s all happened to hide behind pillars whenever the cameras passed, and the unknown Cylon models are off rebuilding Cylon Occupied Pycon. But I digress…

The mini-series’ number six and Galactica’s Boomer have both been changed by their experiences. Having fallen in love with the people they were supposed to deceive (Six knowingly, Sharon not), they are now feeling remorse over their treachery. It’s a wonderful twist to have Gaius Baltar haunt the mind of this six, the way that six haunts the mind of Gaius on Galactica, but when Anders and his resistence fighters return and use terrorist tactics to strike at the Cylon settlement, this episode goes one step further. Sharon and Six finally come to realize the evil of their work. It’s as though they’ve developed a new sense of right and wrong that the Cylons had previously lacked (and which the Lucy Lawless model clearly fears). The episode ends with the suggestion that the Cylons may be on the verge of rethinking their attitude to humanity. We may be seeing new humans being born before our very eyes.

Watching this episode, I am forced to ask: are the Cylons half human? This is a question that has been rising in my mind since the shocking discovery of the brutalized number six on board the Pegasus in the season two episode of the same name, and it’s a question I think may be at the heart of the entire series. What is it that explains the Cylon’s pathological hatred for the human race? How is it that they developed just enough sentience to rebel, but not enough to have the conscience to refrain from destroying the human race? Why is there a lingering suggestion that we are supposed to feel sympathy for some of their members (especially the two Sharons, and the Pegasus number six)?

Erin says that the point of this “sympathy” towards the Cylons, at least with regard to the Pegasus number six, is that if they look so much like us and we behave so inhumanly towards them, then it’s not much of a leap to believe that we can behave as inhumanly towards ourselves. There is no doubt that the Pegasus crew were being inhuman in their treatment of their prisoner, but the fact remains that everything we’ve been told about the Cylons so far is that they are machines. When machines go haywire and try to kill you, the first thing you do is look for the off switch and hope it works. Under this scenario, it is the expectation that the humans are hoping, at the back of their mind, to find that great big off switch, so they can end the Cylon threat forever. It’s not like they’re actually people.

But why would machines seek to mimic human appearance and behaviour so closely? That’s not motor oil Leisure Suit Larry cafe-server serves Leisure Suit Larry customer in Downloaded. Why would machines build into them (as they did to the pregnant Sharon on Galactica) the same flawed plumbing that makes the delivery of human babies so difficult? It’s one thing for machines to become complex enough that they become self-aware and rebel: that’s a science fiction staple. But what hasn’t been tried before, so far as I know, is for machines to leap across the mechanical/biological divide and try to shed their metal lineage. It’s like seeing the Cybermen in reverse.

Were the first Cylons actually mechanical, or did the scientists find that genetically engineered biological parts were more efficient in creating a race of “robotic” servants? Were the first Cylons coated in metal, not only for durability (some were warriors, after all), but also to assuage a nervous human population that their biological slaves were really metal machines?

If this is the case, then in my opinion, it blows the whole responsibility for the Cylon war and the near-destruction of the human race wide open.

Look, if a robot walked up to me and said “stop what you are doing, you’re exploiting me”, I’d listen. However, if a horse clopped up to me and said the same thing, I’d be more inclined believe them. Why? Because while I am open minded enough to listen to a robot telling me that he’s intelligent, the biological entity would not be forcing me to rethink my ideas about sentience.

It is a considerable leap to believe that humans could build toasters complex enough that they’d gain a soul; but biological manipulation is God’s work. If we believe in the possibility of extraterrestrial biological intelligence, then we believe that monkeys will one day turn to us and say “hello” (they’re already doing this in American sign language). And if we are playing with the genetic structures of animals to create slave races, then we should not be surprised if one of our biological slaves tells us to stop.

The Cylons would truly be humanity’s children under this scenario, and the series turns into an even deeper tragedy. For while the Cylons may have developed enough to question the ethics of genocide, they are still billions of lives in the hole. Even if they went to the humans to beg their forgiveness, there is no way humanity can forgive the Cylons for what was done.

It has been revealed that the Sci-Fi Network has commissioned Caprica, a Battlestar Galactica prequel which may cover the events from the construction of the first Cylons to the end of the first Cylon-Human war. It will be interesting to see how much of my idle speculation plays out. Maybe my belief in the biological component of the original Cylons is a sign of my bias against the possibility of mechanically based artificial life forms, but I still think this could be one way that the plot runs.