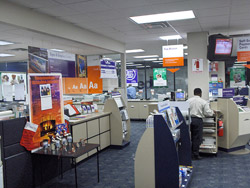 This photograph is by Talll Guy (sic) and is used according to his Creative Commons license.

Twenty years ago this month, I produced my first ever fanzine. It was called Thresholds and it was the official magazine of the Harbord Collegiate science fiction fan club, which I helped organize as a bright and eager (and socially awkward) grade nine student. It was a one of a kind — literally, since the science fiction club faded out after my grade nine year — but it certainly punctuated that year. The writing may have been what you’d expect from fourteen-year-olds, but amongst my friends, it was a tangible accomplishment and an indication that all those Wednesday afternoons watching borrowed movies on Beta cassettes wasn’t entirely wasted. I still have a copy somewhere.

What I remember most is the smell of toner as I perused the copy houses, looking for a cheap enough price on a print run so that we didn’t lose our shirt on this endeavour. And from that time, the smell of toner from copy places like The Printing House or Kinkos has been tied to that sense of anticipation, the feeling that we are on the verge of creating something very special. That sense was enhanced four years later when I prepared for the launch of the very first Trenchcoat. The slightly sulphury smell of the copy machines was the smell of creativity.

Today (Monday), I’m walking through the corridors of the Toronto PATH (which I always call the Underground City), on my way to sign copies of The Unwritten Girl at the Dundurn booth at Book Expo, and I pass by another outlet of The Printing House. The proprietor is shuffling a ream of 11x17 paper, and I smell toner again, and I’m transported right back. This is a continuum, but I doubt the boy of fourteen could really have expected that, twenty years later, I’d be signing my first professional novel.

It’s a good feeling, to know that you’ve created something. And being a father certainly enhances that sense.

Attending BookExpo is really cool. I just stood in a line-up waiting for coffee, standing near Margaret Atwood!

It went well. I signed books for forty minutes straight. At least seventy individuals turned out to grab a free copy of The Unwritten Girl, and these included representatives from various school boards across the country, reps from independent bookstores and Chapters/Indigo, and more than a few librarians. The word-of-mouth from this event should really help promote the book.

I had a great time, scoring five signed books, including a fantastic history of Ottawa’s streetcar network. I also appreciated the chance to meet up with a number of people at Dundurn, who I hadn’t met yet, not to mention reacquainting myself with other authors in attendance, including Marsha Skrypuch. Thanks to my aunt Margaret for lunch, and thanks the folks of Dundurn for having me out.