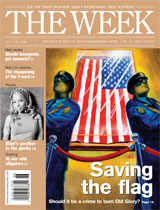 Manitoba’s poor marketing made the American news, earlier this week. In the magazine The Week, a writer derided the government’s efforts to remake the provincial model into a new slogan designed to attract tourists. And I have to agree, if I were to spend $60,000 on a new slogan and the best that consultants could come up with was “Spirited Energy”, I’d want my money back too.

Oh, and let me just say: you know you’ve really pulled a boner if your Canadian mistake gets picked up by the American news media. Ouch.

But the writer went further, saying that he could stand at the corner of Portage and Main throw rocks at passers-by, and get a better slogan out of the first people he hit. Well, the research department at Bow. James Bow felt that we could not let this statement go unchallenged, so we parked ourselves at Portage and Main and threw stones at passers-by. As a result of our first five hits, we recommend that Manitoba change its slogan to:

That should look good on a bumper sticker.

Heh. All in good fun. But I admit that the writer came up with a better slogan off the top of his head. In recognition of the province’s hydroelectric potential, he suggested “Manitoba: Feel the Power”, which is good, if you can avoid the He-Man connotations.

I’m typing this in the concourse of Milwaukee’s General Mitchell International Airport, using its slightly flaky wifi service, waiting for our connecting flight. This has been a good trip, but it will be good to sleep in our own bed tonight.

On our way back from Des Moines, we paused in Omaha for a family visit, and some of us got a chance to take in the World Cup final. It was a good game. France, in my opinion, outplayed the Italians offensively, but credit to the Italian defence, they took everything France dished out, and held on to the penalty kicks. The Italian goalie, especially, came up with an absolutely miraculous save during extra time, to keep his team in the game.

I remember the last time the World Cup went to penalty kicks. It was 1994 when Italy faced Brazil. The final was won — or, more accurately, lost — when the Italian kicker Baggio fluffed his penalty and sent the ball high (and I mean HIGH) over the Brazilian net. And that, to me, was the worst way for the cup to be awarded. I mean, talk about your goats, Charlie Brown had nothing on what Baggio must have felt, with the whole world watching. I felt so sorry for the man, and I think that even if I were a Brazilian fan, I would not have wholly appreciated this victory. The game wasn’t won, it was lost.

No complaints about this set of penalty kicks. The second French kicker may have been supremely unlucky in knocking his ball off the crossbar, but everybody else sent the ball into the net. The World Cup was won with the ball in the corner, and the net fluttering from the impact. Congratulations to Italy. I’m sure they’re celebrating wherever there are Italians. I’m sure Toronto is just about shut down as I type this. And commiserations to France. I was secretly rooting for them, after they’d been written off as too old and too slow. But I think they can hold their heads high with their upset victory over Brazil, and the fact that they clearly outplayed the Italians for two hours. Minus Zidane’s stupid penalty, of course. That may be this game’s goat.