To the True End of Yonge Street VI:
Suburban Gateway 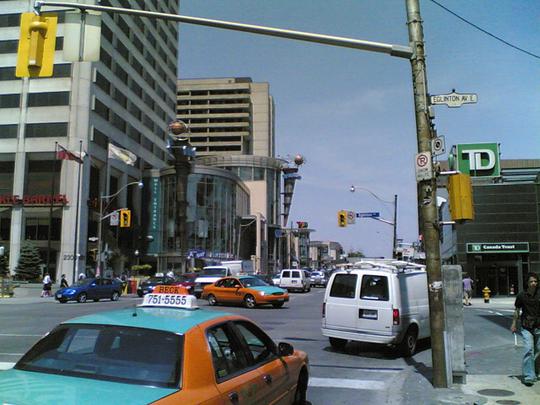 I always referred to the intersection of Eglinton and Yonge as “Uptown Toronto”. This is not an official designation, but when I was young I thought that all towns had an “uptown” — a secondary commercial centre that rivalled the downtown. And, in terms of towers and pedestrian activity, the corner of Eglinton and Yonge does just that. What I didn’t realize until later is that it hadn’t always been that way.

Less than twenty years before I was born, the Yonge/Eglinton intersection was much quieter. Yonge was still a decent commercial street at this point, serving the local community, and bolstered by the Yonge streetcar line, but there were no towers. Yonge and Eglinton wasn’t much different from what Yonge and Davisville is like today, and yesteryear’s Yonge and Davisville was positively flat (though the subway yards probably did their part to remove the buildings that had been there).

The subway changed everything. Opening in 1954, it transformed Eglinton Avenue from a simple intersection streetcar commuters passed on their way to work into a focal point, a gateway between suburb and city. Spouses hauling kids back from school could meet the other working parent here and go someplace to eat. The TTC helped push development along in the early 1960s, by selling the air rights over its station and allowing the Canada Square office complex to be built. The Yonge-Eglinton Centre rose up on the other side of Eglinton Avenue, offering dozens of shops and services connected directly to the subway.

In 1973, the TTC opened the North Yonge subway extension between Eglinton and York Mills, reducing Eglinton’s importance as a suburban gateway, but by then, Yonge/Eglinton had become a destination in its own right. You can see it once you leave the Yonge/St. Clair intersection behind and walk past Mount Pleasant Cemetary. Past the fields of subway cars, gravestones and trees, you can see skyscrapers poking up again, easily dwarfing the apartment buildings on Merton, the new office buildings north of the Belt Line, the TTC headquarters opposite, and the two-or-three storey shops and services (including fruit sellers displaying their wares beneath awnings) through the old village of Davisville.

Yonge Street at Eglinton manages to survive the somewhat pedestrian hostile office towers of Canada Square and Yonge-Eglinton Center, but a lot of activity still happens inside the marble collenades and plush carpets. Yonge and Eglinton echo the atmosphere of Yonge Street around Dundas, including the Eaton Centre and the line of older, low-rise stores. The difference here, however, is that everything seems newer or cleaner and, until a few years ago, a lot less ethnically diverse. Northern Secondary School students grab a bite at the local Pizza Pizza; their students used to fit the stereotype of the rich suburban kid.

Out one block north of Eglinton, the towers give way, and Yonge Street becomes a street for pedestrians again as low-rise shops line both sides of Yonge Street. There are a number of ethnic restaurants, here, from Chinese to Thai to Mexican. You can still shop at hip comic book stores, posh diners, boutiques, and an art gallery or two, before taking in a play at a live theatre. Pedestrian traffic pours out of the north entrance of the Yonge-Eglinton Centre to take in the sights, sounds and smells of the old village of North Toronto.

This area has seen rapid redevelopment in recent years, but redevelopment has been happening for a long time, from before the City of Toronto swallowed the old Village of North Toronto. At Montgomery Avenue, I pass an interesting stone building housing Postal Station “K”. It’s set back from the street and is an interesting example of Modern architecture, but it’s existence is a tragedy, as this is the site of Montgomery’s Tavern.

Montgomery’s Tavern was the site where Upper Canadian rebels, led by William Lyon MacKenzie (Firebrand and Toronto’s first mayor - I wonder if he sounded a bit like Mel at full throttle?) gathered on December 7, 1837, to attack the colonial legislature and (they hoped) end British rule in this part of North America.

The Upper Canadian rebellion was something of a joke (unlike the concurrent Lower Canadian rebellion which had the added edge of French versus English tensions). I’ve heard a history professor call most of the rebels in Montgomery’s Tavern little more than drunken rabble who, when faced with a militia force commanded by Lieutenant-Colonel James Fitzgibbon, thought that the seasoned fighters ahead of them who fired and fell so the second line (them) could add to the volley, had actually been killed by the militia, and ran like the wind. At the same time, Fitzgibbon’s militia force, comprising of citizens pulled from their businesses to defend their city, also broke and ran, leaving Yonge Street and Toronto undefended — and nobody around to attack it.

Whatever the stories about the rebellion, the fact remains that the British ended up responding to the wider grievances that sparked the rebellion in the first place. In 1841, they decreed that the colonial legislatures of Upper and Lower Canada would not have a powerful upper house full of members appointed by the Lieutenant-Governor (a political appointee from England). Instead, the new legislature would be wholly responsible to the people of Upper and Lower Canada. Thus responsible government, and the foundations of Confederation, were established in Canada.

And yet the building which was arguably the seed from which this country grew didn’t survive past 1925. Only the sidestreet, Montgomery Avenue, as well as a historical plaque, give memory to what happened here. Fully 99% of Toronto’s historic buildings no longer exist, thanks to rapid redevelopment, and apathetic attitudes. Yonge Street’s history has been largely obliterated by a series of redevelopment waves.

Yonge Street retains more of its twenties and thirties feel the further north you go from Eglinton Avenue. Glen Grove Suites, a classic art deco hotel, stands out among small scale shops and services in buildings no more than three stories tall. You see more trees as Yonge approaches the Beechwood ravine and Alexander Muir Park. One reason this area of Yonge hasn’t been rapidly redeveloped could be because, north of Eglinton, the TTC spaced subway stations further apart. Instead of “mid-block” stations between the concession roads as was the case south of Eglinton, the TTC decided to save money by building stops only at the major arterials — Lawrence, York Mills, Sheppard and Finch, and running a parallel bus service to pick up people enroute. There is no Glencairn station, as there might have been if the subway had been extended north of Eglinton earlier. One can still walk from Glencairn to Lawrence or Eglinton, but it’s a bit of a trek (almost a kilometre), and you are less likely to see condominium skyscrapers as a result.

Even so, the Lawrence/Yonge intersection is an oddity. Despite the presence of a subway station, only one corner of this intersection has been redeveloped, and the modern office building on the northwest corner is only about four storeys tall. On the northeast corner, art deco yellow brick lowrises can be seen, and a pocket of unassuming stores, as well as a garage, grace the southwest corner. The beautiful stone lowrise North Toronto library branch resides at the southwest corner, and is the only building before a park that’s a part of the Don Valley ravine network. This leads me to believe that the terrain might not be suitable for intensive development. Not that I mind: not every intersection should be as intense as Yonge/Eglinton. There can be only one Uptown.

By this time in my trek, I was getting a little footsore. I’d been able to walk from Queen’s Quay to Wellesley without a second thought, but it was getting late, and I wanted to hurry things along, so I boarded the subway at Wellesley and got off at each station, snapping photographs as I stepped out from the various entrances. However, at Lawrence, I left the subway and boarded the parallel bus specifically so I could get to Yonge Boulevard, halfway between Lawrence and York Mills.

This stretch of Yonge Street has always held a special interest to me. The stores here are shorter (more often two stories, than three stories), and not backed by high rises, though they are of the same era as the stores south of Lawrence. Erin described the area as having the atmosphere of a prosperous small town. Yonge the streetcar suburb is coming to an end, here, and you can feel it. The single-family houses are pressing in closer on the main street. The sky seems to be opening up.

And suddenly, at Yonge Boulevard, it ends. This is the northern boundary of the old Village of North Toronto. Until 1997, it was the northern boundary of the former City of Toronto. Yonge Street dives into a deep valley at the bottom of which the Don River ends. Yonge Boulevard curves northwest along the rim of the valley, losing itself among old trees and suburban houses. The Yonge streetcar used to loop at the Glen Echo North Toronto terminal, a transfer point between the city system and interurban buses and streetcars heading north. The terminal was abandoned in 1973 and is now a supermarket’s parking lot. The tightly packed two-storey buildings run up both sides of Yonge Street until Yonge Boulevard, and stop dead. Here, when they said “city limits”, they really meant it. Beyond, all you see is a sea of green, with glass islands of modern skyscrapers poking up in the distance. 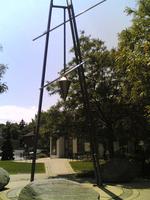 Yonge Street doesn’t end here, but a part of it dies, and a piece of public art marks its passing. This is the end of a continuous section that had been built up before the Second World War. If you were ready for a long trek, you could mosey from here all the way down to the Lake and feel comfortable throughout; the street is built for pedestrians all the way down. North of here, the ethic changes. Yonge Street widens, and the cars seem to pick up speed — not just because they’re descending into the Don Valley. The drivers seem to realize that they have been freed from the shackles of a pedestrian friendly environment, and heaven help anybody who gets in their way.

Yonge Street is never going to be the same.

Next: The Downtown that Mel Built.