To the True End of Yonge Street IX:
The Great Divide 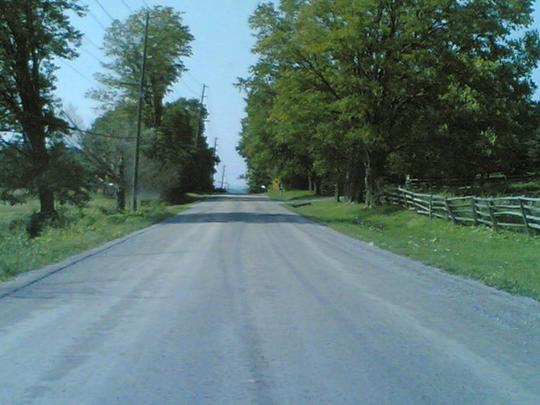 Yonge Street was conceived by Lieutenant-Governor John Graves Simcoe as a military road connecting Lake Ontario with the upper Great Lakes by way of Lake Simcoe. In the late 1790s, he had the Queens Rangers survey a road that ran straight as blazes from the shores of Lake Ontario to Holland Landing, about fifty kilometers north. It is doubtful that the original road as built was as straight as planned, but Yonge Street became the baseline upon which all lots and concessions were laid out in York County. The road was open from Lake Ontario to Holland Landing before the War of 1812.

Simcoe’s dream was to connect the road to the port of Penetanguishene. After his return to England, his successors continued that plan. In 1824, spurred by settlement to the north and west of Holland Landing, a toll road was built, breaking off from the original baseline and heading northwest into what is now the city of Bradford, and here’s where some of the confusion around the northern end of Yonge Street begins.

Bradford was just a temporary terminus for the new road. Within a couple of years, the road extended north, approaching Kempenfelt Bay and the settlement of Barrie. This section exists today and is also known as Yonge Street. It seems it was referred to as Yonge Street, or “the Yonge Street Extension” from the beginning, so it is credible to assume that, at one point, Yonge Street ran uninterrupted from Toronto to Barrie, even swinging around the Kempenfelt Bay.

By the 1830s, a further extension of Yonge Street connected Barrie with Penetanguishene. This was unquestionably part of the same system, but all sources tell me that this road (now known as Old Penetanguishing Road, replaced by the new Penetanguishine Road, which is now Highway 93), was never referred to as Yonge Street. Finally, in the 1920s, when the province decided to connect Barrie with North Bay and Cochrane (which unceremoniously lopped off Penetanguishine Road from the Yonge Street system), the road that they built was named the Ferguson Highway after the premier of the province of that time. Highway 11 came to describe Yonge Street and the Ferguson Highway in the 1930s, and it was Highway 11 that was extended north and west to Rainy River in the fifties and the sixties.

At the north end of Newmarket, there is no question of which way I should turn. The Holland Bypass makes Yonge Street into a continuous road that curves northwest to Bradford. However, at the Morning Sideroad, I face a dilemma. This is where the current road breaks off from the original baseline. Should I follow the current road, or should I break my own rules on what makes a perfect street, and see where the baseline goes? I decide to take the road less travelled.

Turning right onto the Morning Sideroad, I come to the original Yonge Street immediately. A motel located on the side of a narrow, unpainted country road is still numbered in the 18,000s. The original road connecting the baseline to the current Yonge Street further south is now the driveway for a lumber yard.

I park and snap a few photographs, and then turn north. Baseline Yonge Street is now an old country road, barely wide enough for two lanes, cutting through thick bush. I’m the only car on this road. And then, after winding my way down a hill, Yonge Street meets… Yonge Street.

What we’ve arrived on is a more modern roadway, formerly Highway 11B and now York Regional Road 83, which breaks off from the current Yonge Street, just a couple hundred metres north of where I’ve left the road, and heads back to the baseline. From here, it’s a straight line north. We cross railway tracks bearing the Bradford GO Train, and are suddenly in Holland Landing.

Holland Landing has the feel of a village that time forgot, and the residents seem very interested in keeping it that way. The trees are high, the houses are on large lots, but there is no sense of urban sprawl, at least in this part of the town. There is traffic, but none of the volume that’s going screaming at 80 kph on the bypass a few kilometres to the south.

At the corner of Yonge and Bradford streets, we reach one of only two commercial developments in town (a small strip mall containing a grocery store, a chiropractor and one other establishment), though I’m told that Holland Landing boasts two restaurants: the Landing Fish and Chip and the Wild Wing, but for the most part the area is residential and tree-lined. Transit is available, even here, but pedestrians are rare. Save for the two teenagers that nodded at me as I entered the parking lot, Holland Landing seems an unlikely destination for kids looking for a place to hang out.

Passing the Doane Road, Yonge Street’s addresses reach into the 20000s. Here, the street takes on an air of exclusivity. These are modest country estates whose residents seem uninterested of the hurly-burly miles to the south. The Holland River, running to the west, presents an effective barrier to the developments in the west. The only easy exit, other than south, is east, and the land there is very rural.

Finally, we reach the Queensville Sideroad, where Yonge Street takes a bit of a jog to the west. Turning north again, I pass a sign telling me that there’s no exit, and the pavement is narrowing, becoming more rutted. Yonge Street’s journey from Lake Ontario is about to end. I pass Morgans Road, perhaps Yonge Street’s last intersection, and suddenly I’m on a gravel track.

Here, the sense of exclusion is emphasized by how much farther the houses have pulled back from the street. The houses are hiding their faces from all passers-by. In one case, an estate uses a bridge across a drainage ditch to give the sense of crossing a moat. The Silver Lakes Golf and Country Club, hidden behind a line of trees, is the last establishment I pass, and then this section of Yonge Street abruptly ends, with no hint of any continuation of the baseline. I’m surrounded by trees at the end of a narrow pathway. Making a three-point turn puts me in danger of running into a ditch.

So, this is where the baseline version of Yonge Street ends — ironically at roughly the same distance from Queen’s Quay as where the current Yonge Street name vanishes at the edge of Bradford. It seems a bit of an anti-climax. A street such as Yonge shouldn’t end in a place like this, with houses shrouded and hiding, and no sign of civilization save for the ruts in the ground, a couple of battered address signs, and a pile of junk somebody has dumped at the side of the road. Yonge Street deserves more than this as an end marker.

But you can’t argue with a line of trees, so I turn the car around. Turns out, the baseline of Yonge doesn’t end here. And I know where to find it… 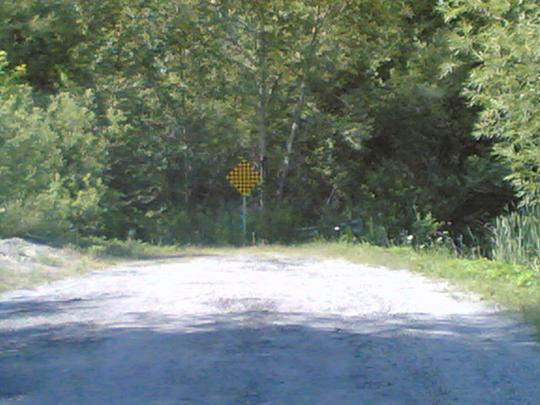 It is possible to get most of the way up the Yonge Street baseline by transit. The subway, of course, operates between Union station (on Front Street) to Finch Avenue, but a parallel bus service operates all day from Davisville station to Steeles. During rush hours, or after the subway is closed, this service is extended south to Queen’s Quay on the shores of Lake Ontario. This bus trip takes you through quite a cross-section of the city.

North of Finch Avenue, York Region Transit offers a number of bus services along Yonge Street. Chief among these is VIVA, a bus rapid-transit service using special equipment and stopping at a limited number of stations enroute. Within an hour of boarding the bus at Finch station, you end up in Newmarket, just to the south of Upper Canada Mall on old Highway 9. Along the way, you can sample VIVA’s wi-fi service. If you want to take the slow route, routes 99 and 98 offer local service along Yonge Street and no wi-fi.

To get north of Newmarket’s VIVA terminal, transfer onto YRT route 52, which follows Yonge Street out of the city, and then hops onto the baseline all the way to the Queensville sideroad. Service is hourly from Monday to Saturday, but it takes only fifteen minutes to get from Newmarket to the north end of Holland Landing. From there, the end of this section of Yonge Street is about a fifteen minute walk to the north.

To follow the current Yonge Street to the edge of Bradford, you may have to hop onto a GO bus bound for Barrie, or walk about a half hour or more northwest from the Green Line.

Assuming you take the subway and make all of your connections, you could complete this trip in under two hours. It would probably take closer to three if you used the TTC’s Yonge Street bus instead of the subway.

I’m not usually one to jump on the bandwagon, but this is a good bandwagon to be on. I was saddened to learn that Dr. Dawg’s partner, Marianne, was diagnosed with pancreatic cancer. But it has been heartening to see that I am far from the only one to wish him and his partner well. Indeed, seeing the outpouring of support from so many bloggers, including those who have been vocally politically opposed to his point of view, has helped restore my faith in the inherent humanity of Canadians and Canadian bloggers, regardless of their political viewpoints. So, I will say again: get well Marianne. Our thoughts and prayers are with you.