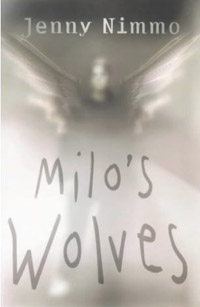 Be warned that this review contains significant spoilers, not only of Jenny Nimmo’s Milo’s Wolves, but also of Lesley Choyce’s Deconstructing Dylan. Read no further if you do not want to be spoiled. Although I will say that you should buy both books!

On with the review!

Jenny Nimmo’s latest novel, The Hidden King, was released in Canada earlier this month, bringing the first Charlie Bone pentalogy to a close. As I’ve written before, Ms. Nimmo is an excellent young adult fantasy author who has found strong success in the shadow of J.K. Rowling; some may see superficial similarities between the Charlie Bone and Harry Potter series, but Ms. Nimmo has a greater range than Ms. Rowling has yet achieved. I’ve enjoyed Nimmo’s Charlie Bone series, but her work for older readers affects me more.

Case in point is Ms. Nimmo’s Milo’s Wolves, published in 2001 but as yet unavailable in Canada, which is an intriguing fusion of science fiction and urban fantasy elements. You do not expect these elements to work together. Faeries don’t usually haul laser pistols (although they do in the Artemis Fowl series, of which I said the science fiction elements took the magic out of the fantasy). For Ms. Nimmo, however, the fusion of these divergent elements keeps you nicely off-balance throughout the novel, always wondering what will happen next. The end result is at times exciting, sweet and deep.

As is appropriate in this nicely unbalanced story, Milo’s Wolves begins with a mystery. With the exception of two chapters, the story is told in the first person by young Laura McCool, the eldest daughter of a struggling middle class family in southern London, with a working mother, a stay-at-home dad/out-of-work actor, one older brother (Andy) and one younger sister (Polly). The children are more than a little surprised when Milo (the father) and Mary (the mother) bring home a young boy named Gwendel, halfway between Polly and Laura in age, who they claim is their long lost brother.

Laura’s father tries to explain that Gwendel was born with health problems and had spent the next nine years of his life in hospital. The parents claim that they kept Gwendel’s existence a secret to spare the children the potential loss should Gwendel have died. The kids, to their credit, don’t buy this explanation for a minute. There is the fact that Gwendel doesn’t look a thing like either Milo, Mary or any of his supposed siblings. Gwendel also brings with him a number of strange items of equipment, including expensive computer equipment, and a strange little robot named Isidore.

But also to the children’s credit, they accept Gwendel as their brother. A bond of familial love forms between them, so they’re more than willing to protect him when a mysterious and malevolent man named Culfire tries to kidnap Gwendel away, claiming that the boy is an angel. Laura demands an explanation, and gets one.

What Gwendel is (and the revelation occurs about a third of the way through the book, so the resolution of the mystery is only the start of a new phase of the story, and not its climax), is a clone. Which makes Milo’s Wolves an interesting companion piece to Lesley Choyce’s Deconstructing Dylan. These two authors become one of the first to use this science fiction/science fact issue (post-Dolly) in young adult fiction, and it is interesting seeing how both authors tackle it.

Deconstructing Dylan tells the story from Dylan’s point of view, which gets us into the head of this clone. It is a far more internal story than Milo’s Wolves as it seeks only to shows us that he is no different from you and me. Ms. Nimmo, on the other hand, makes the odd choice of telling the story from the point of view of Laura. This distances the reader from Gwendel’s personal struggle to find his own identity, but she makes up for this by delving further into the political and theological implications of cloned humans. Culfire and his Society for Angels wants Gwendel because he is sure that Gwendel is an angel — a baby born outside of a sexual act, and thus free of original sin. In Ms. Nimmo’s book, you get a better sense of the chaos that could result once the human race realizes that there are clones among us.

But Ms. Nimmo seems more interested in the family relationships between the parents and the siblings, once they have Gwendel dropped between them. Numerous references to the classic The Little Prince abound. Ms. Nimmo successfully convinces us that the love Gwendel’s new family have for him is genuine and that, like le Petit Prince, he is something special to be cherished.

Much of this is accomplished thanks to Laura, who is an intelligent, compassionate and thoroughly likable eleven-year-old who finds her world swept out from under her, but copes. The story also focuses on her relationship with her father Milo, who is an interesting character in his own right. An unemployed actor who received fleeting stardom as the action hero of a show wherein he nearly killed himself doing his own stunts, he craves the action once again, and is entirely too willing to take on Culfire and his minions when violence threatens.

The story twists and turns like a mountain road, as Gwendel heads off to meet the scientist who created him, and Laura and Milo pursue when the truth becomes too terrible for Gwendel to handle. There are hints of ghosts and of a battle between angels and demons.

Purists may be frustrated by Ms. Nimmo’s refusal to decide whether Milo’s Wolves is science-fiction or fantasy. They may call it an unfocused book, full of elements that clash with each other. But it works, because of the deftness of Ms. Nimmo’s writing, and the family that is at the heart of this tale. The McCools find themselves at the centre of a situation far bigger than they are, and yet they cope by focusing on the important thing: their love for each other, and their newest family member — clone, or no clone.