If Bob Rae is so Unelectable, Why are you Afraid He'll Win? 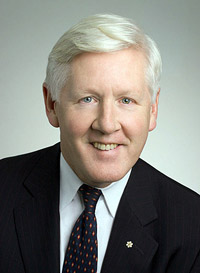 A quick comment about Bob Rae’s leadership bid for the Liberals and his apparent “unelectability” in Ontario due to his tenure as premier here.

I am of the opinion that Bob Rae gave us the best government that was possible for the early 1990s. Inheriting a hidden $7 Billion deficit from the outgoing Liberals, he became the first government leader in fifty years to slash provincial spending. He was enough of a centrist to believe that all Ontarians should share the pain — to try and stop the bleeding, he cut social services, public transit subsidies and raised taxes. And as all Ontarians shared the pain equally, all Ontarians hated him equally.

But to say that Rae’s policies caused the recession is to ignore the fact that America’s poor economy destroyed the political career of president George H.W. Bush, despite being rendered almost invincible by the Vietnam-exorcising victory in the Gulf War. To say that Rae deepened and lengthened the recession ignores the economic hardships wrought by the restructuring occurring under the Free Trade Agreement passed by the Mulroney government.

I agree that Rae might be a hard sell, but this man still convinced one-fifth of the electorate to stick with him following the worst recession in the province since the Great Depression. He beat the federal Conservatives in the aftermath of Brian Mulroney, both in terms of popular support, and in subsequent seat totals. And, more tellingly, since his departure, the NDP lost more than a third of its vote.

Bob Rae isn’t as unelectable as certain individuals would have you to believe.

So, Greg Staples, Mike Park, Stephen Taylor and I did a Bloggers Hotstove in the midst of all my webhosting troubles, and we were able to get STI Media up early in order to host it. Unfortunately, I was unable to add a link or additional commentary.

Ever have one of those moments when you think of something profound that would be an excellent answer in a debate, but the debate ended a half an hour ago? During the discussion, when Greg went off on his rant that all politicians play polarizing politics,Stephen Taylor asked me a good question: would I prefer a politician that acted on the courage of his convictions (a la George W. Bush) or one who huddled in a corner, afraid to make any decision that might offend someone (a la Paul Martin).

At the time I said that I wanted the third way: a politician that would listen — really listen — to all sides of the debate, and then make a firm decision. But, to elaborate on this: yes, you can’t please all of the people all of the time. Yes, as a politician, you are going to have to make decisions which help some people and hurt others, but it should never be your intent to hurt others. Give me a politician who listens, who takes my aspirations seriously, and that makes all the difference.

Yes, the Ontario Green Belt plan harms farmers’ land values, but you can still argue that the pain now is nothing compared to the pain that could be suffered if the Greater Toronto Area was allowed to take on the social, economic and environmental characteristics of Los Angeles or Detroit. Yes, the McGuinty Liberals probably won’t be able to supply the Toronto Transit Commission with all the money they need, but acknowledging that reality is different from Flaherty phoning in his PC leadership convention speech from Whitby to prove he’s “not a Toronto guy”.

Being a centrist doesn’t mean being unable to make decisions. I will argue against ideas which I think are wrong. But I will try not to question the value of the individuals who express those ideas. And I think the world would be a better place if more of us would attack the ideas, and not the people behind them.

On Garth Turner and Stephen Taylor

Well, congratulations on newly minted independent MP Garth Turner for becoming perhaps the highest profile individual in the world ever to be canned because of their blog. Andrew Anderson has his own thoughts, and a run-down on the reaction from the political blogosphere.

My take? Even Robert McLelland believes this was some time in coming. Yes, the optics are terrible. The Conservatives lose a passionate MP in Turner, but keep Anders, how’s that for sad irony?

I was surprised to hear speculation that the Greens would court Turner to become their first MP. It might or might not happen, but I still think that Turner is an MP who wouldn’t be comfortable in any party. Instead, we’ve found this parliament’s version of John Nunziata or Chuck Cadman. I expect him to run in the next election as an independent, and win.

It started at Garth Turner’s news conference following his dismissal wherein he disputed the Conservative party’s reasons for canning him, and challenged the media to point to any incident where he breached caucus confidentiality. Blogging Tory founder Stephen Taylor took up the challenge, and posted an entry from Garth’s blog dated May 23, 2006 which, he claims, was altered from the original.

The comments are an interesting read. As Somena Media notes, Stephen Taylor performed an impressive feat. In less than twenty-four hours, he discovered a five-month-old blog post by Garth Turner that may have been altered from the original, and text purporting to be from the original. The original post was allegedly only online for less than twenty-four hours; too little time to be picked up by the Wayback Machine, and not Googleable. Somena and others ask: who is your source, Stephen? How did you get your hands on this information? Is this a sneak attack or a conspiracy from the Prime Minister’s Office?

I have mixed feelings about this.

What I’m most uncomfortable about is the automatic assumption that Stephen Taylor has received marching orders from deep within the Prime Minister’s Office to lead a co-ordinated attack against Garth Turner, and that somehow in and of itself should discredit his attack. There is no doubt that Stephen Taylor is a partisan Conservative, but that can also mean that he has the motivation to engage in this research on his own initiative.

I am a little concerned over how willing we are to discard information given to us, simply based on the political affiliation of the source. People are political, but an argument or an idea brought forward by individuals should not be dismissed just because “it’s Democratic propaganda” or “just a story from the Liberal media”. That’s intellectual laziness, of the sort that allows the science of climate change to be summarily dismissed. It doesn’t give the idea its due, nor does it effectively discredit ideas that should be discredited. The response of a Conservative to hear his ideas dismissed as “Conservative propaganda” is to believe in his ideas even more strongly, whereas an idea deconstructed without thought to political bias and found wanting is an idea that can be found wanting (or valid) by more than just a narrow portion of the political blogosphere.

This is similar to when Canadian Cerebus and Jason Cherniak pointed to online sermons written by NDP candidate Cheryl DiNovo and claimed that she was soft on pedophilia. When this happened, a lot of people accused them of acting on orders from Warren Kinsella and other sources deep within the McGuinty government, despite the fact that they had no proof.

I was not among those people. For me, the priority was not simply to dismiss the attacks as political, but to show how innocuous words were being misrepresented. Spending time looking for a conspiracy was a distraction. I mean, what difference does it make if Jason Cherniak broke the story, or some average voter? DiNovo’s sermons were publicly accessible, and any journalist on an expedition could well have found the sections and tried to make a story out of them.

What this comes down to is accusations against major political bloggers of astroturfing. Astroturfing describes the practise of false grassroots movements in the United States funded heavily by political parties (usually the Republicans) to build support for an issue where no support exists.

But accusing Stephen Taylor of running an astroturf website only really sticks if it turns out that Stephen Taylor is in the pay of the Conservative Party to do nothing else but blog. Otherwise, he’s just an enthusiastic partisan campaigning for what he believes in. That makes him the very definition of grassroots. I object to an overwhelming use of advertising and media resources to power one political belief over another without proper debate, but ultimately I don’t believe that people who are active in politics can force voters to go places they don’t want to go. Unless Stephen Taylor is pouring hundreds of thousands of dollars into his blog that Liberal or NDP bloggers don’t have, he’s not really doing anything to disrupt the democratic process in this country.

That being said, Stephen Taylor did perform an impressive feat, and I am left to wonder how he managed to get his hands on Garth Turner’s original post. It would be good to know if he knows of a log of Garth Turner’s posts, keeps one himself (this I doubt), or was fed this information from sources within the Conservative Party who have been keeping extraordinary tabs on Garth Turner’s blogging activity.

I raise this as a privacy issue, because I want to know who out there is storing blog entries the moment they are written, and I want to know if my own blog is at risk of receiving the same treatment.

Are my initial posts, warts and all, stored and accessible, even after I login and revise them? I’m aware of sites like the Internet Archive, but that seems to archive my site no more than a few times per year. That’s one thing. Having a site watching my every move, logging everything I post the moment I write it, is quite another.

I used to say that you should never post anything to your blog that you would be uncomfortable saying in a conversational voice in a public restaurant. Depending on the availability of machines or websites to log what you say the moment you say it, those ears who might be listening in are far more sensitive than I’d thought. If this is the case, the Garth Turner example could lead to suggestions that prospective bloggers concerned about their privacy might want to reconsider blogging in the first place.

And prominent political bloggers from all of the parties on the political spectrum should beware. Somebody may be logging everything you say the moment you say it, keeping it handy to use against you, should you ever cross the line.

For the record, the Blogging Alliance of Non-Partisan Canadians aggregator uses CaRP, a program recommended to me by Stephen Taylor himself, which is why I doubt that he personally has a database of every single post posted by every single Blogging Tory. CaRP simply grabs the RSS feeds of member sites and downloads them to a cache, and from those selects the two most recent posts of each site to show on the aggregator site. Each time a member site adds a new blog, their RSS feed changes. The newest post is added, and the oldest post on the feed (most are limited to just 15 posts) is dropped. The RSS feed is overwritten on top of the CaRP cache for the site.

No database exists of every Non-Partisan Canadian post that I know of. Nor could I devise one with the resources I have at hand.