The Night Girl, the Next Morning 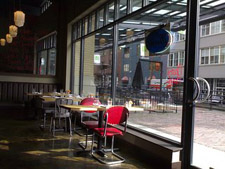 The picture on the right is courtesy of Vancouver Eats Out. The next time (or, more accurately, the first time) I’m in Vancouver, I’ll be sure to look into this site’s recommendations.

I’d like to thank Rachel for saying nice things about me on her blog, and for giving Jorane more of the attention she deserves. She also pointed me to this web page which features two interviews from Jorane’s latest album, The You and the Now and an eight minute interview. And I have to agree with Rachel on this one: you should all have a look at the video for Pour Ton Sourire, which is just the right sort of steamy. Erin thinks it has possibilities for The Night Girl soundtrack.

My mother-in-law is here, spending the week with us to celebrate Vivian’s first Halloween and her first birthday. The flight was uneventful, despite being delayed, and she arrived earlier this morning in good spirits. True to form for airports these days, we didn’t learn about the delayed flight until after I got to the airport and waited until the flight was supposed to land. However, the time was not wasted. I spent about an hour writing almost a thousand words for The Night Girl. It felt good, and maybe, just maybe, the story is starting to get forward momentum at last.

I believe I struggled a bit early on because I dropped Perpetua into a situation that was just too stable. The early part of the story amounts to: Perpetua is unhappy at her job; she finds new job with weird co-workers, and she kind of digs it. Short of bringing in an element to artificially mess things up (I initially thought of an Elvish mafia, but that’s too cliché), that actually ends the story. For this reason, Cameron has been on my case to bring in additional conflict from the inside. The question I should be asking, according to him, is: what does Earthenhouse want.

I was reluctant, at first, to disturb the cozy relationship between Perpetua and Earthenhouse, but I’m coming on side with this idea. I’m not all the way there, however, because there is still a question of what Perpetua wants. And right now, what Perpetua seems to want (get a job that doesn’t suck the soul out of her; prove she can live on her own without her mother) doesn’t brush up, much, against what Earthenhouse wants (respect and acknowledgement of trolls and goblins by the human race), and that’s something I’ve got to work on. And somehow, the key to what Perpetua really wants — something which conflicts or otherwise sparks off of what Earthenhouse wants — seems to rest with her mother.

And perhaps Wired Fergus, the cappuccino maker, may stir things up some more as well.

Here’s a quiet scene after Perpetua’s first day of work. It’s morning, and she’s rather boldly invited Fergus out to breakfast.

“So,” said Fergus as the waitress delivered their scrambled eggs and bacon, sighed theatrically, and walked away, “What’s a nice girl like you doing in a job like this?”

Perpetua looked at him over the rim of her coffee mug. “What makes you think I’m a nice girl?”

Perpetua squirted ketchup on her scrambled eggs, took up her knife and fork, and started eating.

Silence descended. They looked at each other over the rims of their coffee mugs.

“So,” said Fergus at last. “You got questions?”

“That can’t be enough to keep their secret,” said Perpetua.

Fergus shrugged. “What about the people who work in the receiving docks and the basement of this financial district? Do you know who they are and where they live?” Perpetua frowned. “That’s different.”

Fergus cocked an eyebrow. “Is it really? And if you don’t know these guys, then why should you know who they know, you know?”

“So, what happened? Did they get tired of living under bridges and suddenly decide to get jobs?”

“Who, the dock workers?”

“No, the— you know—,” she waved her hands, then lowered her voice. “These goblins. Gargoyles.” She looked around to make sure nobody was listening in, and hissed, “Trolls.” She slumped in her seat. “What do they call themselves?”

Fergus gave her a small smile and sipped his coffee. “Goblins, gargoyles and trolls. Look, it’s okay. Nobody expects to end up working for a different species.”

“I thought bosses were a different enough species.”

She looked up. “How long have you been working with them— by them— serving them coffee?”

He shrugged. “A couple of years. I took the job to pay my way through University. Ended up buying the franchise. It pays well.”

“Sort of,” he said. He slugged his coffee and set it at the side of the table. The waitress looked over, sighed again, and came over with a pot for a refill. Perpetua refused a second cup.

“We got to work,” she replied. “Especially in this city you got to work. I don’t want to be in a one-room apartment forever.”

“I grew up in Grand Bend,” said Perpetua. “Ever hear of it?”

Fergus blinked at her. “So?”

Perpetua swigged her coffee and set it down. “Town makes millions off the tourists. Perfect summer getaway. No other reason for the town to exist.”

“The main street is a deserted carnival,” said Perpetua, looking past him. “Most of the places are closed, and the wind comes off the lake and makes you wish you were dead. So I moved to Toronto.”

Perpetua grinned ruefully. “Sorry. That didn’t sound like such a bad thing to say when it was in my head.”

It was actually quite pleasant in the airport, despite the delays and despite the loathsome rain outside (I have to ask: did we skip October and jump directly to November?). There were many families waiting to be reunited it seems this morning, and more than a couple young children running up to their father, mother or grandparents with arms outstretched. That sort of thing really helps to put one in a good mood, I must say.