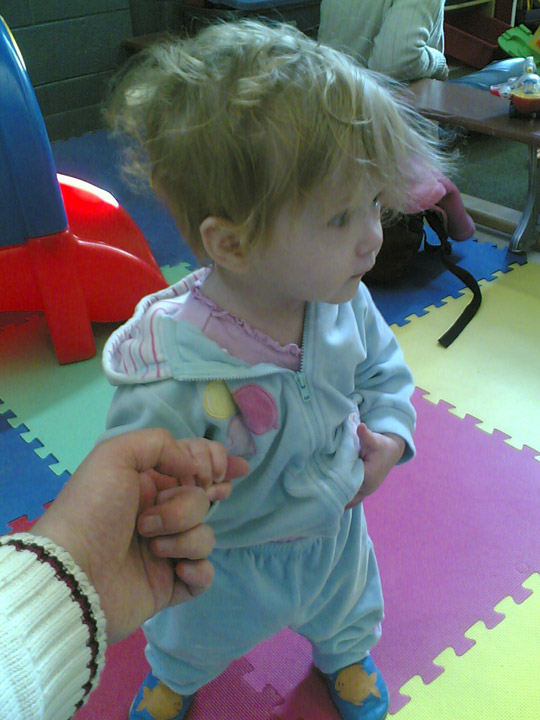 Trust me, Erin got the worst of it. (The full story of the birth is here)

The first few weeks of Vivian’s life have been a blur to me, honestly. I vaguely recall that we finalized a will soon after Vivian’s birth, that it was signed and Dan witnessed it, but I honestly don’t recall much more than that. I do recall the late night feedings, however.

And looking back on the photographs of Vivian’s first year, it is amazing to see how much she has transformed under my nose. She looks so different now than what she looked like during Christmas, and I’m constantly finding reminders of how small she used to be, even though she’s always been so big in my life.

Today, Vivian is on the verge of walking. She can walk with short stretches if you hold her hand. I’ve once tricked her into walking two steps (to grab onto a couch) when I took my hand away. She can do it; she just doesn’t have the confidence to try it, yet. She’s on the verge of talking, and can already say dadadada and mamamamama, which we think refers to us. Gus is “ki!” and she can imitate kisses and sneezes. She seems happy and she seems to be thriving, although this past couple of weeks, her seventh and eighth teeth have come in (are still coming in), and that has made for some late nights and deafening screaming.

That topical oral pain reliever is our best friend at the moment.

But I have to say that there has been so much joy for this first year. Despite the nearly thousand diapers we’ve changed — or, perhaps, because of it. I never realized just how rewarding this time would be. Even if we both could still use more sleep.

Perhaps we could talk to the standard time people about adding a few extra hours in each day for sleep. Would that work?

P.S.: I didn’t realize this until I caught sight of this post, but we’re now in National Novel Writing Month, a time when amateur and professional writers alike are challenged to write a 50,000 word novel by the end of the month. Of course, we’re not expected to write a good novel. That comes later, during National Novel Editing Month, which takes place in March.

This is not to be confused with National Novel Finishing Month, which is in December.

I’ve not been able to participate these past few years, even though the concept appeals to me. A trip to the Maritimes and, of course, a new baby, took care of that. Then there was also the small matter that I didn’t have a novel that needed writing.

That’s changed this year, and while I don’t expect to write anything close to 50,000 words this month, The Night Girl might get more of my attention as I try to get this thing back on the front burner. Erin and Cameron have been helping me with plot ideas, and I may have good progress to report by November 30. Wish me luck!