A Bit of Blog Criticism...

Eugene? I’ve kept silent for too long, and I can’t do it anymore. So, hear these words: for the love of God, PLEASE remove some of the widgets on your blog’s sidebar. You write interesting posts and I like to visit your blog regularly, but when my Rogers cable Internet takes five minutes to download a single page of your blog, when my CPU usage goes through the roof just surfing to your blog, you officially have a widget problem.

Anyway, with the understanding that I’m not perfect and with an appreciation of constructive criticism, I invite you all to talk about what you like or don’t like about my blog design and offer suggestions for changes.

In other news, the latest Bloggers Hotstove is up. I returned after three weeks off, to find Jason Cherniak and Stephen Taylor acting in a lot more partisan fashion. Maybe the Liberal leadership convention is providing a sugar high? Anyway, sound difficulties aside, I had fun, and I hope you enjoy the hour.

Not only is he up for Best Photo Blog at the Canadian Blog Awards, but he’s all set to celebrate his one millionth visitor, and he’s about to do it in style, with a big contest, prizes for which will be given out this coming January or when the millionth visitor actually arrives, whichever is first.

I don’t spend as much time as I should on Photojunkie. I consider him to be one of this blog’s fathers (although this guy has a closer claim, since he introduced me to the concept of blogging). It was Photojunkie who invited me to join the Greater Toronto Bloggers, which got me into the blogosphere community in the first place. 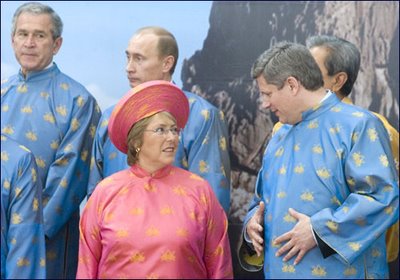 …we’ll never, ever, hold the APEC Summit in Vietnam again?

I especially like Olaf’s comment: “I don’t think any of those leaders would know if they were just getting their chains yanked. Next time a foreign head of state shows up, I say we force him/her to dress in full hockey gear, and get goosed with the PM on rye. They wouldn’t know the difference and they’d have a hell of a time.”

Here are some links that sent my eyebrows through the roof: