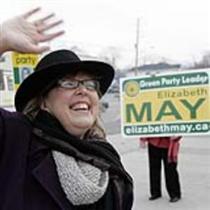 The results for the London North Centre are coming in, and it looks like it’s a Liberal hold.

Disappointing though the results must be for the Green Party, especially after May led for a portion of the night, it’s still a remarkable achievement. Sure partisans from the other parties might pooh-pooh the results, and say that the leader of a party should have had no trouble winning, but May did shoot Green Party support in the riding up twenty percent. She shot past the New Democrat and Conservative candidates — and the Conservative candidate, being a former mayor, was a well-known, albeit divisive figure.

Pay particular attention to the last column. That’s the change in percentage of popular support in the riding since the federal election this past January. Note that all the mainstream parties bled support. The big question is, who did they bleed support to? It’s been said that Megan Walker’s negative campaign backfired on her, so did her votes go to May? Is this proof of May’s leftist leanings, despite her assertion that the Greens remain to the right of the Liberals? And what about the drop in the Liberal support? Did only 5% move, or was the number actually greater than the shift suggests? Did the Conservatives get a boost in January from the punish-the-Libearls crowd and have those votes returned home, offsetting a greater-than-suggested rush to the Greens? Or were Red Tories so disgusted by Haskett’s candidacy that they fled to the Greens?

It’s a shame that the Greens didn’t make history, turning Elizabeth May into the Deborah Gray of the Green movement, but the results remain a rap on the door of the mainstream parties. There’s a new colour out there, and a vote for it is not a vote wasted.

As for that other by-election in the Bloc Quebecois fortress of Repentigny, the Bloc unsurprisingly took back their riding with two-thirds of the ballots, but it’s the race for second, third and fourth that proved most interesting. Despite reports of a Conservative collapse in La Belle Province, the Conservative candidate still managed to take a respectable 19% of the vote. This is an increase in the Conservative take during the January election (18.07%).

Liberal support dropped from 8.65% to 5.6%, putting them behind the NDP, whose support dropped more marginally from 7.74% to 7%. The Liberals can’t be happy with that result.

In other news, don’t forget to check out the latest Bloggers Hotstove, which was quite good this week, we thought.