He Is Awake (The Impossible Planet Reviewed) 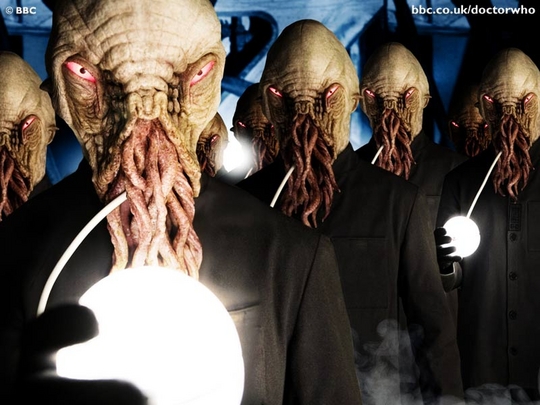 Short review: I don’t believe it. Doctor Who out Aliens Alien!

No, I’m not usually given to huge bouts of hyperbole, why do you ask?

The Doctor: I don’t know what’s wrong with her (the TARDIS). She’s sort of queasy. Indigestion, like she didn’t want to land.
Rose: [straight-faced] Oh, if you think there’s gonna be trouble, we could always go back inside, and go somewhere else…
[Rose cracks up, and they laugh outrageously]

What is it about Doctor Who that allows the series to so effortlessly mine H.P. Lovecraft, H.R. Giger or the other masters of gothic horror? It’s flexibility of format, perhaps? The fact that it is a fantasy series in sci-fi clothing? Whatever the case, some of the best Doctor Who stories have found their inspiration by turning to the masters of horror. Maybe it’s the time travel element, says Erin. After all, the whole “evil, evil from the dawn of time” schtick becomes a lot more credible if you can actually visit the dawn of time.

Anyway, whether it is the human race-memory fear of the intelligent reptilian Silurians (the previous masters of Earth), or the shameless and delightful cribbing of Sherlock Holmes, Jack the Ripper and Phantom of the Opera in The Talons of Weng Chiang, or the fan produced, At the Mountains of Madness inspired audio play Endurance, Doctor Who is more than happy to scare its audience, and it does it again with The Impossible Planet.

The Doctor and Rose barely manage to materialize on a scientific research station far in the future on a planet that is orbiting on the event horizon of a rapidly growing black hole. They are immediately discovered by the humans that set up this station, and the mysterious, Lovecraft-inspired slave creatures called the Ood, but the crew trust the Doctor and Rose enough to give them a tour of the place, thankfully getting the paranoid accusations out of the way before things start going to hell in a handbasket.

Although nothing more than a rocky husk, this planet used to boast a civilization billions of years ago. The Doctor discovers ancient writing on the wall so old not even the TARDIS can translate it. The humans are here investigating a massive and mysterious power source ten miles beneath the surface. The power source is so powerful, it’s probably the reason this planet hasn’t fallen into the black hole. Indeed, it’s sustaining the very gravitational funnel the humans travelled along to access this black hole so close to its event horizon.

All of this is, of course, impossible; as is, from the humans’ points of view, the Doctor and Rose’s sudden appearance. But that very impossibility is what has drawn the humans here, practically to the end of the Universe. It’s not Milliways, but it’s beautifully rendered. As the revived Doctor Who’s first visit to a truly alien environment, The Impossible Planet succeeds in providing viewers with some impressive visuals.

The Impossible Planet is scary. Alien scary. Doctor Who is very much in its element here: base under siege, power outages, dark shadows, a limited number of characters isolated in the wilderness, whose numbers will soon be coming up. It manages to sustain that fear by balancing it off with wonderful moments of comedy. The scene transcribed above wittily acknowledges the problem in a nicely glib manner.

The ancient legends of the area call the impossible planet “the bitter pill”. According to the story, the black hole was a mighty demon tricked into devouring the planet, only to spit it out because it was poison. Legend or not, there is an ancient and powerful intelligence at work here, and it appears to have horns. The Doctor senses this, the humans seem to as well, but still they stay. As huge as the risks are, the reward is just too big to pass up.

Mr. Jefferson: For how shall man die better / than facing fearful odds / for the ashes of his father / and the temples of his gods?

I love how The Impossible Planet plays with the show’s conventions. Usually, when the Doctor and his companion arrive at a base under siege, they’re marked as saboteurs or worse, and locked away. That doesn’t happen here. Even though the Doctor and Rose’s appearance is impossible, the humans on board the station are delighted to have their company. Perhaps this is what comes from sitting on top of the devil; it’s easy to tell who your friends really are.

And this alteration of the convention has the nice effect of making all of the guest characters sympathetic from the get-go. Not only that, but rather than waste time locking the Doctor away and having him play the escape game, writer Matt Jones takes the opportunity to have us get to know the crew better. This is key, because when bad things start to happen, and they do, they start happening not to red shirts or people too stupid to realize they’re in a horror movie; they happen to people we know. Their deaths have significantly more impact.

There is no secret formula to the frights, here. No gore, no evisceration, no night of the living dead. Just creepy moments inserted when the Ood, the computer and Rose’s cellphone pick up transmissions and say things they are clearly not supposed to say (“He is awake”). Director James Strong takes the time to establish the characters, make you care about them, and then he brings the Bad Things (tm) to bear. It’s very cerebral, very slight of hand. You have a man with red eyes and ancient writing tattooed to his skin, cracking glass on the outer hull of the base, creatures with eyes that glow red, deep melodious voices of evil. And yet the director brings out set pieces which stick in the back of your mind and give you nightmares.

The casting is marvellously done, with special credit given to the voice of the beast — in this case Gabriel Woolf, who is better known to Doctor Who fans as Sutekh the Destroyer (from The Pyramids of Mars), another evil from the dawn of time — a casting move that had more than few fans go “hmm…”. How would you like this man answering your phones?

You couldn’t care about the characters if the actors weren’t able to bring them to life. The second most terrifying scene involves Scootie Maniska (played by Myanna Buring), who’s really a minor character in the scheme of things, written primarily to discover the possessed Toby standing out on the planet’s surface in vacuum, and die. It’s her acting (not to mention Toby’s, played by Will Thorp) along with the script that backs her up that makes us care.

Scootie: “But that’s the airlock. Why would you open the airlock? It’s the night shift. We’re not allowed outside. Has someone gone out?”
Computer: Confirmed.
Scootie: Who?
Computer: Cannot confirm.
Scootie: Okay… but hold on, I know, tell me whose spacesuit’s been logged out.
Computer: No spacesuit has been logged out.
Scootie: But… you’re not making any sense, you can’t go outside without… [She gives up and speaks into her wrist device.] Zac, I think we’ve got breakdown on Door 41, it’s saying somebody’s gone outside onto the planet’s surface. [radio issues static] Zac? Zac? [Speaks into control panel again] Computer, trace fault.
Computer: There is no fault.
Scootie: Tell me who went through that door!
Computer: He is awake
Scootie: What?
Computer: He is awake
Scootie: What’s that supposed to mean?
Computer: He bathes in the black sun.

The scene of mourning that follows isn’t forced, and neither is the horror that the audience members feel over Scootie’s death.

Then there is the set and costume design, especially the Lovecraft-inspired Ood. This is really a remarkable piece of work, because it has to work on the viewers on three levels: to provide an initial scare, then settle into a somewhat cute and cuddly appearance as the Ood are shown to be mostly harmless, and then to obtain glowing red eyes and become truly terrifying. The designers accomplish this with latex and lightbulbs and animatronics alone. The shape of the face is such that it only takes the eyes glowing red for these creatures to transform. The director helps in the choreography. The Ood are really scary when they are marching in unison, with sinister intent.

And I can’t leave without making a note about the music, provided by Murray Gold, who has really grown into his role, here. Back in Rose, I thought that his music was appropriate but nothing to write home about. By The Parting of the Ways, he had established themes and was mixing instruments in a beautiful complement to the storyline. Here, he exceeds himself, especially with the haunting wails from the fiddle as Toby “bathes in the black sun”, or when the Doctor and Ida explore the caverns carved out by the ancient civilization around the mouth of Hell.

The storyline of The Impossible Planet isn’t original, even for Doctor Who. We’ve had base under siege stories, ancient menace stories, and stories about the gateway to hell throughout the genres of science fiction, fantasy and (of course) horror. More than a few people have noticed the similarities between the metal seal in the ancient cavern and the seal over Buffy’s Hellmouth, but the script holds together, and is paced very well, allowing other elements to take things further.

The Impossible Planet ties with The Girl in the Fireplace for my list of the best episodes of the season because everything is perfectly executed. We’re supplied with rich characters throughout, and the director masterfully paces everything, and keeps us in the dark to the last minute. The Impossible Planet barrels forward to the inevitable conclusion, to the satisfaction of all.

The Beast: I have been imprisoned for an eternity; but no more. The pit is open; and I am free!

To be continued. In six weeks. Damn you, CBC!!