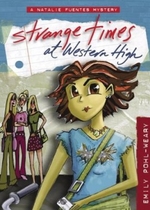 I have a suspicion that 16-year-old Natalie Fuentes would object to the tag-line on the back cover of the book about her life.

You see, saying that you’re “super cool” is pretty much a definition of being not cool. And over and over again, Natalie doesn’t see herself as cool. Arriving in Toronto after spending time in Buenos Aires and New York, and attending her first day of school at Western Collegiate, she knows no one. She’s an outsider, and outsiders are never cool.

But she’s cool with that.

Emily Pohl-Weary, granddaughter of Canadian science fiction legend Judith Merrill, author of A Girl Like Sugar and editor of the saucy literary magazine Kiss Machine, turns her attention to young adult fiction with a feet-on-the-ground mystery called Strange Times at Western High. The book is very much in the style of Nancy Drew — or, possibly Nancy Drew’s granddaughter who got raised with considerable street sense in a big city.

Natalie wants to get on with her life and avoid making waves; unfortunately, that seems to go against her individualistic nature. Not enough that she’s the new kid at a strange high school, but she also does uncool, counter-culture style things like publishing a zine about her life (called My (Very) Secret Life), or taking unauthorized “short cuts” into buildings. She stands up for herself, refuses to back down from bullies, and thus has a school record the length of her arm.

Her first day at Western Collegiate sees her taking a short cut through one of the back doors in order to avoid an intimidating clique of surly blond girls in miniskirts who seem have taken an instant dislike to her. She immediately walks in on a brutal attack against the school’s chief caretaker, Issac Kaufman, possibly saving the man’s life as the masked assailant runs off. Now the police and the principal are pestering Natalie for all she knows, and she’s facing the nervous attentions of Issac’s son, Jacob, himself a reclusive computer geek who’d had a run-in with the law for hacking. Various groups in the school mark her out as a troublemaker and vandalize her locker, and that’s just before lunch.

Natalie’s parents, jet-setting journalists who took Natalie with them as they covered the world’s nastier hotspots, are now divorced. Natalie lives with her father while he takes a full-time job with the Toronto Star to give her some stability. He’s a loving parent, but rather out of his depth. He frets over Natalie’s problems, and pushes her to make friends. Fortunately, he has a good eye for potential friends. The next door neighbour’s daughter, Ruth Hamilton and her friend Suzy Moon both attend Western Collegiate. Ruth’s older brother Matt is the newly-minted quarterback on the football team. The three are bemused by Natalie’s odd ways, the fact that she edits a zine on her life as well as her propensity for trouble, but they welcome her into their circle and give her critical support against the bullies that seem to be taking over the school. The fact that Suzy’s mother owns an office supply store grants Natalie access to deeply discounted (okay, free) photocopying for her ‘zine.

Her father would be less happy with Natalie’s contact with Ramiro Lopez and Eddie Chango. Ramiro is a graffiti artist and Eddie is Western Collegiate’s former quarterback, expelled last year for “an incident” against the aggressive new coach Mr. Wojcek. Both are “allergic to the authorities”, but they seem to mean well, and Natalie comes to rely on them to tell her what’s happening beneath the surface at Western… that is, until Eddie himself becomes a suspect in her case.

Why was Issac Kaufman beaten unconscious? Does it have anything to do with the increasingly bold theft of supplies and sports equipment from the school? With Western Collegiate quickly gaining a reputation as a problem school, why does Principal Jefferson seem to have so little control? And why does the blonde clique have it so in for Natalie? Are any or all of these questions connected?

Emily Pohl-Weary creates a story that’s connected to the rich urban culture and diversity of Toronto life. Natalie produces zines, is street-smart and knows the latest counter-culture songs. Western Collegiate’s student body is a great multicultural mix of characters. Emily inserts all of these elements effortlessly, making them a part of Natalie’s character and her life without making them appear forced. The story is told tightly in Natalie’s point of view, and the voice is wholly authentic. Natalie is a very likable character and one can see why Ruth and Suzy find it so easy to be her friend: she’s intelligent, forthright without being bossy, quite capable of taking care of herself, but willing to accept the help of others. She is adept, but not overconfident. It’s easy to sympathize with her.

Of particular note is the chemistry between Natalie and Jacob Kaufman, and his subplot as Natalie starts to pull him out of his computer-monitor, chatroom shell. Here’s an excerpt which occurs when Natalie and Jacob consider some breaking-and-entering in order to get to the bottom of the developing mystery:

“When do you plan on doing this?” he asked.

He spat out a mouthful of coffee, hastily mopped it up with a napkin.

“It’s Saturday,” she said. “The building will be empty.”

“Not necessarily. There’ll be at least one caretaker watching it, and sometimes the teachers with no lives come in on weekends to catch up on marking or prepare lessons.”

“Almost empty, then. You have to admit, it’s the quietest time of the week.”

She could practically see the gears turning in his head.

“True. But we’ll need some supplies.”

“I’ve already got one.” She pulled out her penlight keychain and shone it in his eyes. He blinked.

“You, my dear Watson, are an amateur when it comes to gear. Let’s go back to my place and plan this covert op.”

“Only if you admit that I’m Sherlock in this partnership,” she joked.

“Then who does that make you, Joe Hardy?”

The corners of his mouth lifted. “Try Ned Nickerson.”

The book’s mystery is well crafted and will keep you guessing to the very end, and you will love to see how Natalie triumphs. Strange Times at Western High is the first in a series (the second one is due out Fall 2007), and I think that’s very good news. I must admit that I got caught up in Natalie’s life. I look forward to seeing how things develop for her, Jacob, Ruth and Suzy, very soon. And is there any way I can get a copy of My (Very) Secret Life?

Strange Times at Western High (A Natalie Fuentes Mystery) is published by Annick Press and is available from Amazon.ca and better bookstores everywhere.

Emily has her own website but has created a fun flash-based website just for Natalie. Such is the depth of knowledge Emily has of Natalie’s character that you can snoop around Natalie’s room, checking out her blog and looking at her CDs and learning lots of interesting information about a number of the references that pepper the book. My only complaint here is that Natalie’s blog is not updated frequently enough, but as the owner of a book promotion blog myself, I know how much work these can represent.