What War on Christmas? 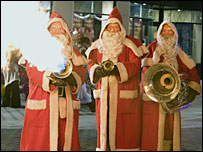 Maybe there is a War on Christmas, but if so, it’s being fought by two minuscule armies while the silent majority of us wish they would just shut up and enjoy the season.

This is more last season’s debate than this one. It was last year when the screeches of loudmouths Bill O’Reilly and Ann Coulter prompted expressions of contempt through parts of the blogosphere, but there have been echoes from the screechers this year as well. They are no doubt fueled by incidents from genuine Scrooges like Justice Marion Cohen, who decided that Toronto’s Jarvis Street courthouse would be a Christmas Tree-free zone.

Justice Marion Cohen who oversees administration for the Ontario Court of Justice at 311 Jarvis St., ordered a small artificial Christmas tree, decked out in lights and ornaments, moved to an administrative corridor on Monday. In a letter to staff, she said it is a Christian symbol that might alienate people of other creeds and cultures.
(link)

It’s hard not to sympathize with those who take a little bit of umbrage at those who complain about Christmas festivities. It’s one thing to ask that the Christmas carols be turned down on the PA system so that people can get back to work, and it’s one thing to point out how far the commercial holiday has diverged from the Christian one, but it’s another to try and ban active enjoyment of the season. If one chooses not to celebrate Christmas, that’s fine and good, but just because you don’t celebrate Christmas doesn’t mean that others shouldn’t as well.

Yes, it is amazing how pervasive commercialized Christmas cheer is in society these days, but it’s also amazing how well one can shut out the chatter if one puts one’s mind to it and more people should try to do that rather than trying to force the world around them to conform. Trying to physically turn back the tide, like King Canute, is not only futile, it makes you as much of a nuisance to others as Christmas is to you.

We continue our reporting on which American stores are using “Christmas” in advertising this Christmas season and which are not. So far, here’s the list. Again, our litmus test is which operations are using the greeting “Merry Christmas” in their advertising and which are not. OK, using — you can see JCPenney’s, Macy’s, Bloomingdale’s, Dillard’s. Not using, there they are. Now, Kohl’s, still giving us a hard time, but their advertising has been all “Happy Holidays” so I don’t know what they want. The company says the clerks are free to say “Merry Christmas.” Yeah, OK, that’s nice. Again, this investigation is designed to spotlight retailers who have knocked the word “Christmas” out of the Christmas season. We’re not too interested with the word “merry.” Don’t really care about “merry.”
(link)

Yeah, O’Reilly. It’s quite clear that you don’t care much about merriment, either. If Santa were to shove a lump of coal up your butt, two days later it would come out a diamond.

O’REILLY: Yes, it does. It absolutely does. And I know that for a fact.

And, for chuckles, let’s see O’Reilly compare the Catholic Church’s alleged silence on the Merry Christmas issue to its pedophilia controversy:

And, uh, we also have a very provocative segment, why aren’t the prelates of the Catholic Church in America, the cardinals and the archbishops standing up for Christmas? Why? There’s only one who will talk to us, Sheehan out in New Mexico. Archbishop Sheehan. Where are the others? Where are they? If you don’t stick up for the baby Jesus, who are you going to stick up for?

Now, they were MIA in the priest/pedophilia scandals. Now, they’re MIA in the Christmas controversy. What the heck’s going on with them?

They would seem to have a sense of perspective.

If this whole campaign and the rhetoric isn’t an overreaction, I don’t know what is. Why should it offend you if somebody chooses to wish you well by saying “Happy Holidays” instead of “Merry Christmas”?

Since hearing these reports, I’ve kept an ear open to what I’ve heard at various stores. There seems a balanced mix of “Merry Christmas”, “Happy Holidays” and “Have a happy Christmas” among people wishing us the best for the season. “Seasons Greetings” doesn’t even place, possibly because it is a contrived thing to say. More importantly, most people who said “Happy Holidays” seemed to do so in a natural statement to wish me all the best for the season. There was very little stiltedness to the response; no sign that they were on watch for others out to stifle their natural inclination to say “Merry Christmas”, and no sign that they were out to stifle the “Merry Christmas” phrase itself.

This would seem to confirm my observation from previous years, when I heard Christmas carols played over the PA system of my high school (and still do). There was absolutely no active discouragement of the commercial holiday Christmas had become. Maybe the religious nature of Christmas had been downplayed, but true Christmas for Christians wasn’t meant to be worn on the sleeve. It is, after all, supposed to be a holiday about humility — something Bill O’Reilly wouldn’t know if he fell face first into it on live television.

More damningly is the fact that O’Reilly and his ilk are coming at this “problem” as if it’s a new and sinister threat, whereas the commercialization of Christmas has been proceeding for decades. For proof, look no further than the carol “Silver Bells”. This safely ecumenical, decades old Christmas carol is actually a paean about Christmas shopping so sappily unrealistic that anybody actually shopping at a mall this time of year might, after listening to the song once too often, hunt down its author and anybody who’d ever sung it on air, stuff them into Walmart uniforms and chain them to the check out aisles of a superstore during Black Friday after giving all other Walmart staff a paid break to retire to the staff room with popcorn to watch on closed circuit television as the sparks flew.

It’s Christmas time in the city.

The thing is: both the judge who banned the Christmas tree in her courthouse and those who talk about a War on Christmas over the use of “Happy Holidays” in some greetings, are engaging in the same behaviour: they’re telling us how we should celebrate the season. And I have to ask, who the hell are they to tell us what to do? There are dreidles and Hannukah symbols alongside Santa Clauses and Christmas trees at Vivian’s Early Years centre; I have no problem with that. And I have no problem with people choosing to wish me Happy Holidays instead of a Merry Christmas at this time of year, if that’s what they want to say.

My advice to all of these individuals who don’t like how other individuals celebrate the season (or not), is to do what so many of us have done for so long; suck it up. Nobody is asking you to celebrate the season, and nobody is going inside your head to remove thoughts of Christmas from your mind. Just go home with your family and enjoy yourselves.

And happy holidays to all.