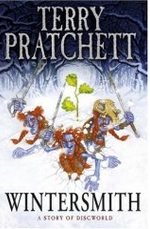 Gradually, I’m gaining an appreciation of the magic and charm of Terry Pratchett’s writing. For some reason, I managed to get through high school, university and a fair chunk of my adult life being a fantasy fan, without dipping my toe into the Discworld universe. And though this oversight was corrected by reading Wee Free Men, I must confess to being intimidated by Pratchett’s considerable body of work. It’s almost too much of a good thing, really; where do I start?

Tiffany Aching has, thus far, been the most successful in leading me into Pratchett’s Discworld realm (I’ve also read The Amazing Maurice and His Incredible Rodents). From Wee Free Men, I was enchanted by this eight-year-old girl who took on the Queen of the Faeries armed only with an iron frying pan in order to save her baby brother and the baron’s son, Roland. Tiffany was helped along by the Nac Mac Feegles — the Wee Free Men of the story — who are basically a bunch of belligerent, boozing, battling, dumb-and-brave-as-posts Scottish smurfs.

The Nac Mac Feegle take on the task of looking after young Tiffany (the “big wee hag” as they call her) with a fierce loyalty, but it’s Tiffany that carries Wee Free Men. She’s a fascinating character, carrying all of the vulnerability of her youth but totally unwilling (or possibly unable) to let that burden her. The Nac Mac Feegle are hilarious with their phonetic Scottish dialogue and their too-dumb-to-be-afraid ways, but it’s Tiffany who carries all of the doubts, who overcomes all of the adversities she knows should crush her, and who makes all of the interesting decisions as we watch her grow up.

She certainly catches the interest of Miss Tick, a witch-finder who is startled by the young girl’s witchy abilities which are strong despite the fact that Tiffany lives on “the Chalk” — an area of rolling hills fit mostly for sheep herding whose soft rock is said to be unable to support witches. Tiffany’s grandmother, however, was a legendary shepherdess, and very probably a witch in her own right. With Tiffany’s abilities threatening to outstrip that of her grandmother, Miss Tick suggests that Tiffany get some proper witch schooling, which takes us into the book A Hat Full of Sky. This book is not as funny as the first (partly because the Nac Mac Feegle don’t feature as prominently), but it continues Tiffany’s story (she’s now eleven years old here) and we are introduced to characters that feature prominently in Pratchett’s other works (including Esme “Granny” Weatherwax). Here, the depth of Tiffany’s powers are illustrated when she attracts the attention of a Hiver.

Terry Pratchett’s Wintersmith takes us to Tiffany’s thirteenth birthday with a story that’s an improvement on A Hat Full of Sky. Tiffany is really coming into her own, so much so that, while the Nac Mac Feegle do get a number of funny scenes in this book, they aren’t missed as much as they were in the second book. The comic tension is now shared on a number of fronts, including Tiffany’s maturation into a young woman. You really start to feel the age gap between Tiffany and Granny Weatherwax, and you share Nanny Ogg’s delight at embarrassing the poor girl with questions about the baron’s son Roland, who may or may not be developing into Tiffany’s boyfriend. More importantly, Tiffany starts to make mistakes.

At the night of the autumnal equinox, Tiffany is taken to a secret showing of the Dark Morris — a dance ceremony the precise opposite of the May Day Morris Dance, designed to give the cycles of summer and winter another push. It’s a sombre ceremony, performed silently and all in black, but Tiffany still feels the beat that the dancers are dancing to and, for reasons she can not explain to herself, she finds herself dancing to that beat, and finds herself inside the dance, where she attracts the attention of the Wintersmith. The Wintersmith is the invisible elemental that resides at the centre of the dance and who controls the winter. Over the next six months, poor Tiffany must suffer the Wintersmith’s attentions, as he showers her with embarrassing gifts, including snowflakes in her image, and threatens to swamp the world with winter-without-end.

In Wee Free Men, Tiffany had plenty of internal doubts, but she blazed on with the clarity of a child. A Hat Full of Sky shows Tiffany going beyond her abilities and getting punished for it by the attentions of the Hiver — even though it’s not really her fault. Wintersmith features Tiffany making the mistakes any young, awkward teenager would make, which means the girl is starting to come into her own as a fully fleshed out adult character. What is definitely Tiffany about Tiffany Aching is the fact that she accepts the responsibility for her mistake — one which, for the first time, might cost other people’s lives — and resolves to do everything in her power to fix it, even at the cost of her own life.

There are other subplots which flesh out Tiffany’s character and the character of those around her. Intriguingly, like Tiffany, her witch teachers now seem more human. Granny Weatherwax loads Tiffany down with a number of chores over the next six months, both to keep Tiffany occupied and her mind off the tremendous threat she faces, but also to further her own agenda in a game of one-upsmanship against the flamboyant Mrs. Earwig. There is also a wonderful sequence with Tiffany’s current mentor Miss Treason, who teaches Tiffany an invaluable lesson about how psychology plays as important a part in witchcraft as magic. Miss Treason’s last moments (she’s 113) are among the highlight of the book, being at once hilarious and sad.

Even the Baron’s son, poor Roland, gets some good airtime in this story, as the Nac Mac Feegle are forced to conscript him on a hero’s quest to help Tiffany finish her fight against the Wintersmith. The boy is, in many ways, the opposite of Tiffany — sheltered, naive, not very powerful at all, and knowing it, but he is growing too, thank’s to his friendship with Tiffany, and it will be interesting to see where his story goes in the next book.

I have not read enough of Pratchett’s work to assess for certain how well he does with Wintersmith, but the book feels like one of his best, as he is firing on all cylinders producing a story that is at times funny, sad, poignant and uplifting. He does a heck of a lot in just thirteen chapters, with not a wasted page among them. The disparate subplots come together thematically and the story is resolved neatly, with the reader left wanting more.

Please do tell me that there is more Tiffany Aching to come. And please tell me what I should read next.