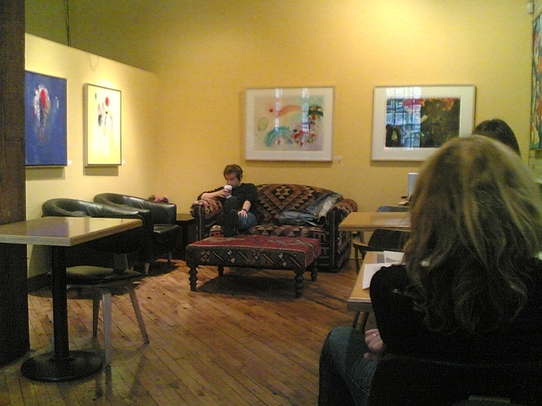 I’m writing this in The Roastery, a coffee shop at the corner of Richmond and Spadina just outside of downtown Toronto. I’m plugged into the net via Wireless Toronto’s free wifi service. It’s a pretty decent service. The pickup is good, and the browsing speed is everything I would expect, and I don’t have to pay a penny. The good folks at the Roastery pay on my behalf and will be rewarded by some additional purchases of cappuccino.

I should also retract an earlier review I made about Toronto Hydro’s One Zone wireless. I just happened to open up my laptop while on the Bathurst streetcar approaching King Street, and I was able to log in and grab my e-mail. The pickup and browser speed has been dramatically improved… just in time to make this a pay-per-use operation, I suppose. Oh, well.

I’m in Toronto after having dropped Erin and Vivian off at the airport. They’re on their way down to Lincoln to be with Erin’s father over the Martin Luther King weekend, to make up for the fact that she and Vivian were too ill to travel to her grandmother’s funeral back during Christmas. I couldn’t afford the plane ticket, so I’m sticking around home, missing my girls terribly, and taking advantage of this break to write and clean the house.

Today, though, I wandered around town, riding streetcars for kicks, picking up a book from Bakka, and having lunch with my good friend Martin Proctor. I finished the substantive edits for Fathom Five and submitted them yesterday, a week early, and the story is now in the copyediting phase. So it’s back to The Night Girl, which has begun to take shape in terms of plot. A note to Cameron:, no, I don’t think Fergus is going to die, but it’s clear that the plot has speared out in several directions at once, and to make things coherent, some elements might have to be dropped. And, sadly, Scooter seems to be high on the list. We’ll see, though.

Here’s one scene I worked on today; I’m not sure where it fits in the narrative. Another will follow tomorrow.

“Miss Collins,” Earthenhouse motioned to a mountain of stone with knuckles that touched the floor. “This is Howard. He’s a troll.”

“He used to work in our security division,” said Earthenhouse. “Unfortunately, he took the word ‘bouncer’ a little too literally.”

Perpetua swallowed hard, but smiled as she shook an outstretched finger. “Hello, Howard.”

“Miss Collins,” said Earthenhouse. “I have a special assignment for you.” He handed her a videocassette. “I need you to run today’s training session.”

She blinked. “Sir, I’ve never trained anybody before—”

“Do what I do,” said Earthenhouse. “Just pop in the video and stand back.”

Stand back, she thought. Like they’d stampede the screen?

“Okay,” she said, picking up the video and turning it over. The label had faded from long use. “When’s the training session?”

“In ten minutes,” said Earthenhouse. He looked back towards the waiting area. “I see some of our clients are lining up right now.”

She looked. The usual crowd was still there, but now all had taken up the seats on the side of the room closest to the training room. Stone hands folded on stone laps and glassy eyes stared back at her patiently. She raised an eyebrow. “I’m pretty sure most of these people were here yesterday and the day before. Why didn’t you give them the training session then?”

“Oh, they’ve already seen it the week before.”

She shot him a look. He shrugged; his shoulders cracked with the movement. “They seem to enjoy it.”

Then Earthenhouse beckoned her down. She crouched and he whispered to her. “Get Howard to help you. It will help him feel useful after losing the bouncer contract.”

She looked up at Howard. He saw her staring and grinned, revealing ragged, stone teeth. “Bounce?”

She straightened up. Taking the video, she stepped to the training room, Howard following behind, crouching to get through the door. A dozen eyes watched her eagerly and she could hear whispers of “Movie! Movie!”

They weren’t here to be trained, she realized. Unlike the goblins and trolls who were out on assignment, these goblins had nothing to do. This training video was entertainment to them. They’d do better if she went to the local Blockbusters and brought back a romantic comedy. Maybe she would do that.

The video equipment was already set up. Perpetua looked over the buttons, figured out how to turn things on, and slipped the videocassette into the VCR. Behind her, she could hear the trolls and goblins filing in. Chim and Chum, she noticed, stayed in the reception area, still chanting “Movie! Movie!” to themselves. One of the goblins closed the door on them discreetly.

She straightened up. “Get the lights, Howard,” she said.

Howard reached up and pulled down a halogen lamp, light socket and all, and held it out to her.

Perpetua stared at the offering a long moment. “Put the lights down, Howard,” she said at last.

The troll set down the shattered assembly. Above her, the wires trailing from the ceiling flashed and sparked.

“I’ll get the lights,” said Perpetua, and she flipped the switch. The room darkened, and the sparks stopped.

“Oooooooh!” said Howard and the goblins in unison.

Perpetua picked up the remote control and peered at the buttons in the dark. She pressed play, then muttered as she fiddled with the tracking. The tape played with a streak of white static across the bottom of the screen. There was nothing she could do, but the audience didn’t seem to mind.