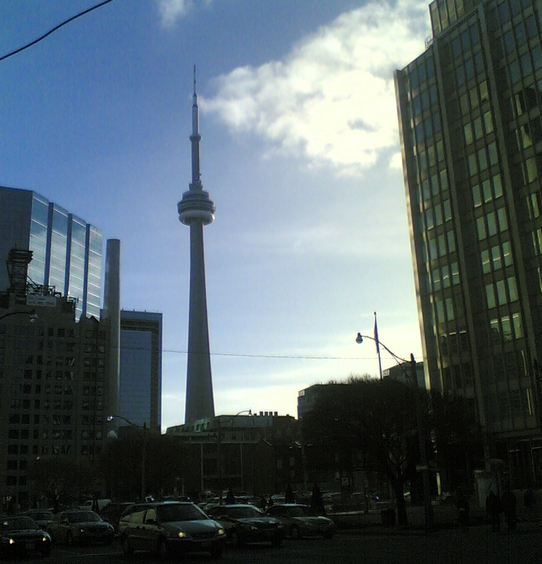 I had a good time yesterday. Dan and I headed into Toronto and strolled around the downtown. Here’s one of the shots I took above. Today, I spent a fair amount of time cleaning, and then helped my father as he repaired a leaky faucet in my house. There weren’t too many moments of comedy, although we were both a bit red-faced when we tried to pull off the tap, spent a fair amount of time straining before we realized there was another screw that we had to remove.

I also received a phone call from Lincoln. Apparently, Vivian has been wandering all through her grandfather’s house, asking for me, going “Dada? Dada?” She doing okay, all told, but oh does that make me miss her. I talked to her on the phone, and while she has no idea how I could possibly fit inside the phone’s housing, I think she liked hearing my voice.

Work is continuing on The Night Girl. I feel like the plot is coming together. Here’s another segment, wherein Perpetua starts to get some sense that there is more to Earthenhouse’s operations than meets the eye.

She picked up the folders off Earthenhouse’s desk. She noticed another tucked away beneath the inbox and pulled that out as well. Shuffling them into a neat pile, she tucked these under her arm and stepped over to the filing cabinet. There, she glanced at the titles before slipping them away.

Earthenhouse was as organized as ever. The files were individual clients, sorted by division, each division given a special letter, helpfully explained by Post-it Note. B for bouncers, AI for art installations. RC came up infrequently; rare coins, Perpetua decided, was a division where Earthenhouse sold coins rather than goblin-hours. And EM— EM?

The last file in Perpetua’s pile was a manilla folder like all the rest, but she’d never seen the EM division before. She didn’t even know what the initials stood for. Even the label was different, brown instead of red/green for art installations and black/blue for bouncers. This wasn’t a typo, this was a special division that they’d never covered on her Post-It training.

She looked at the client name on the label. It said “Toronto Transit Commission / Eglinton-Yonge.” She flipped it open.

There was a Post-it note on the first sheet within the manilla folder. “For my eyes only —TPE”. Of course.

The documents inside were the familiar lists of goblin and troll names and numbers indicating hours worked. There were invoices marked ‘PAID’, but signed with Earthenhouse’s signature and not her’s. And she did not know a single name on the list. There were at least fifty, and not one of them had come into the office for training or to receive the next assignment; possibly because they were hard at work at this assignment, which was slated to end… no date was given.

She flipped the folder closed, opened it again, then closed it. She tapped it against her fingers. Should she even be curious about this? She was an administrative assistant, not the owner. She worked for Earthenhouse. If there were things Earthenhouse didn’t want to share about his business, it was literally his business.

But, if nothing else, where was she supposed to file this? There were no brown EM labels in this cabinet.

She looked around her office. Her eyes fell on Earthenhouse’s desk. She’d never been inside. He hadn’t told her not to look; he’d just brushed past it in his training. “This is my desk,” he’d said, taking her arm and leading her past it to the filing cabinet she now stood beside.

She thought a moment, then stood, listening. The office was quiet. She peered out the door. The waiting room was empty. She took a deep breath and crossed the office to Earthenhouse’s desk, the soft crinkle of the Astroturf loud in her ears. She knelt by his chair and peered at the drawers beside it. They were locked, but the lock wasn’t expensive. She knew from experience how to thwart it, after spending one too many evenings told to file folders for a cabinet everyone was strictly ordered to keep locked, but which the company had lost the key to years before. Scratching the lock shaft with the credit card, she was able to slide the drawer open within seconds.

She stared a long minute, on her knees, at the folders upon folders. Half the business was in here. Beneath her, the deep rumble of machinery picked up again, felt in her chest rather than heard in her ears. The pictures on the wall, of stone bridges and railway tunnels, shook gently, causing the reflected light of the spot lamps to shudder.

Perpetua filed the rogue folder properly, closed the drawer, and reset the lock. She got up off the floor. Taking one last look around, she left Earthenhouse’s office, gathered up her rucksack, locked up and left for the day.