The Devil You Say?
(The Satan Pit Reviewed) 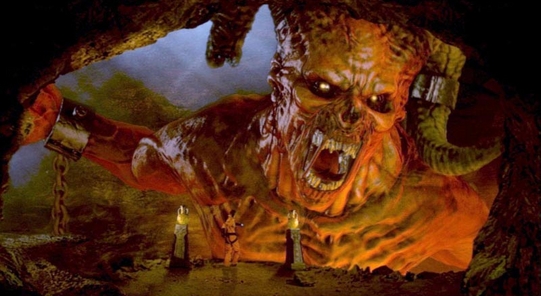 The above image is courtesy of the BBC.

So, after the events of last episode, hands up how many of you thought the devil was going to put in an immediate appearance? That many? Huh.

Of course, the problem with promising an all-powerful monster is that you eventually have to deliver, or at least find creative reasons to not deliver. So, while director James Strong cheats at the end of The Impossible Planet by giving us a shot rising out of the newly-opened pit from the point-of-view of absolutely nothing, I’m willing to forgive writer Matt Jones because he throws the viewers a curve ball. How many would expect, after the events of The Impossible Planet that the The Satan Pit would be interspersed with moments of quiet reflection? And yet these lend critical weight to the story.

Everything about The Impossible Planet is about setting up the threat, delivering the punchline of the cliffhanger. With the threat now overt, the characters have little to do but run for their lives — or, they would in the hands of a lesser writer. Author Matt Jones shakes things up a bit, by separating the Doctor from the rest of the crew, leaving Rose to take over his leadership duties and showing the audience how far she has developed in two years. Although there are moments of panic in everyone, thanks to the devil’s mind games, Rose is almost Doctorish in her resolve.

And we mustn’t forget the depth of the supporting characters. Although there is one obvious redshirt (the young woman killed by the Ood soon after the cliffhanger’s resolution; a woman whom I don’t even remember seeing in the previous episode), we see little moments which flesh out the crew. Again, we see some of this in their facing down of their primal fears, from Captain Zack’s unease at being thrust into command, Security Chief Jefferson’s anguish over the death of his wife and Ida Scott’s fear of her father — all of these elements are deftly inserted so as to give us a picture of these individuals without padding out the story too heavily, and the actors bite into these elements and make the most of them.

Of course, this characterization helps in no small way to make us care for these individuals. The action scenes have more bite because their fear is the fear of real people, and the sacrifices, especially that of Security Chief Jefferson really hits home. Even the Ood, released from their possession and dying in terror, come across instantly as pitiable creatures deserving of our sympathy. At the end of the story, as Captain Zack reads into the record those that died this day, he starts to list each Ood individually (albeit by number), and I for one thought that this was a good and appropriate gesture.

But it’s the Doctor’s story that offers the most compelling moments, as he confronts the idea of something far bigger than himself — something far older than he’s willing to comprehend. It’s not a serious or deep religious discussion — the story would drag to a halt if it were — but the dialogue and Tennant’s acting show us a side of the Doctor rarely explored. As he dangles at the end of ten miles of cable, surrounded by darkness, he is like a single candle flame offering hope. It’s a wonderful scene, and though you know that it will end with him letting go and vanishing into the dark, it’s still an awesome moment when it arrives, especially with his goodbye message to Rose coming just seconds before contact to the surface is reestablished.

The Satan Pit is a study in subtlety, where the overt threat is nowhere near as dangerous as the plots escaping our notice. The Doctor notices this almost immediately as soon as he comes upon the Beast. It is a cliche roaring horned demon, not nearly as scary in person as it would have been had it stayed in the shadows. However, this letdown is the point. Throughout this story, the devil has allowed others to work his wiles for him. He’s taken over Toby and the Ood; he plays up the fears and anxieties that already exist within the humans, and when the Doctor encounters the physical body of the beast, the mind behind it is not there. The devil doesn’t need to manifest itself physically in order to do its damage; the devil’s work is more effective when it comes in the form of the evil that men do.

The message is clear: as much as the devil may be a physical being, it is also an idea, and it is the idea that’s escaping on the spaceship.

The Satan Pit has moments which take my breath away — the Doctor’s final conversation with Ida, his disappearing into the pit moments before Rose reaches him by radio, the rediscovery of the TARDIS, and the Doctor’s rescue of the remaining crew. To my mind, this and The Impossible Planet are the best this season has to offer, like The Girl in the Fireplace, showing the depth the show can achieve. This two-parter is at once gothic horror, psychological thriller, and a wonderful action story. It is a tale where the quiet moments are as important as the heart-stopping ones. This is why Doctor Who is the best show on television.

And next week, it’s time for something completely different…