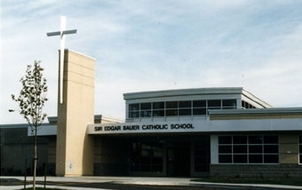 I’d like to thank the students of Sir Edgar Bauer Catholic School in Waterloo for having me over to read to them as part of their Literacy Week. I spoke to a library packed with over 120 students and all were very kind and attentive as I went through my presentation. They also asked all sorts of questions at the end. And again I’d like to thank Marsha Skrypuch again (who will be reading there tomorrow) for putting me onto personal voice amplifiers. Worth their weight in gold, they are.

Thanks to Jane Blythe for organizing this reading. I had a great time, and was really impressed by the place and its students. They had a good sized library and a nice display set up for Literacy Week. I was able to pass out a number of my mini-bookmarks and promote the upcoming release of Fathom Five.

Speaking of which, the copy-edits arrived yesterday. Most are minor enough, and I approved them without comment. Some are more substantive (especially where they are edits of the substantive edits), and I’m thinking about how to best address these. There are a couple of word choices that I’d very much like to keep, despite what my editor says. Fortunately, he’s very amenable to that sort of feedback.

Also, you remember my question a few days ago about the use of the word “towards” versus “toward”?. I’d been finding the latter in use more often, and I’d decided to make the switch in case I was using the version (in reality “toward” is American whereas “towards” is British with Canadians, being Canadian, using both). Well, after all that, Barry writes and tells me this:

I’ve made a number of changes for reasons of consistency: for example, you used both “toward” and “towards”; I changed all instances to “towards”, because doing so was also consistent with your use of “backwards” rather than “backward”.

Grr. I’d forgotten about my use of “backwards”. Guess I’m just a British speller. Back to square one. :-)

Again, Credit Where It’s Due

After all of the talk out there about Michael Fortier’s interference in the procurement process at the Ministry of Defence, we should take a moment to note that Harper appears to have learned from his mistakes, at least.

The Harper government has avoided a repeat of the 1986 CF-18 debacle by thwarting Public Works Minister Michael Fortier’s efforts to increase Quebec’s share of the economic benefits flowing from a $3.4-billion military purchase.

“This government and our ministers have no intention of interfering in the regional distribution of the contracts,” Prime Minister Stephen Harper told reporters yesterday afternoon.

Laying down the law, Mr. Harper said it is up to market forces to determine which companies would receive benefits flowing from the government’s purchase of C-17 cargo aircraft from Boeing Co.

A senior Conservative source added that Mr. Fortier was “hauled out on the carpet” at the cabinet committee meeting for his efforts to boost Quebec’s share of the benefits.

“The view was that Fortier was getting too greedy,” said the source, who added that the other senior Quebec minister on the file, Industry Canada’s Maxime Bernier, has taken a pan-Canadian view.

Hear, here, Mr. Harper. That shows some refreshing integrity, even though once again your teammates have demonstrated themselves to be discouragingly mortal.