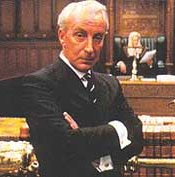 Actor Ian Richardson really started to come into his own late in his career. This journeyman actor may not be as well known as Laurence Olivier or Sir Richard Attenborough, but he carried himself and his roles with considerable gravitas, leading me to believe that more was still to come.

I first caught sight of Mr. Richardson in the mini-series shown on Masterpiece Television, The House of Cards. That role defined his career as much as anything, as he played the politician Sir Francis Urquhart, Chief Whip for the British Conservative Party. In the aftermath of Margaret Thatcher’s (then fictional) resignation, he would claw his way to power after nearly destroying his own party and implicating a weak prime minister in a corruption scandal he himself manufactured. Sir Francis Urquhart was wiley and jovial. He would break down the fourth wall and speak directly to the camera as his nefarious schemes came to fruition. His catchphrase, when questioned about his plans, was usually, “You might very well think that; I couldn’t possibly comment.” Which was his sage way of saying “yes” without actually saying yes.

And Sir Francis Urquhart was ultimately ruthless, resorting to outright murder in order to secure his place in 10 Downing Street. The final moments of House of Cards is a scorpion stinger that renders the mini-series unforgettable.

The mini-series which debuted soon after Margaret Thatcher’s real resignation and John Major’s shaky one term in power, was said to have been diabolically timed, and there was a definite sense that Ian Richardson thoroughly enjoyed himself as he brought the fictional party to its knees. He was a jovial villain, able to convey in body language and voice a sense of power that commanded respect, even if he was good or evil. After House of Cards and its two sequels, he went on to such other roles as the old Earl of Ghormenghast, to Sherlock Holmes, to Dr. Joseph Bell in a fictionalization of Sir Conan Arthur Doyle’s life called Murder Rooms. He was most recently cast as the voice of Death in a big budget adaptation of Terry Pratchett’s The Hogfather, and it seems unlikely that anybody adapting other stories featuring Pratchett’s character could find an actor that could take Richardson’s place.

So, while Ian Richardson may not be the household name he deserves to be outside of connoisseurs of British film and television, he did find considerable and well deserved success late in his life. And that is not a tragedy.

Ian Richardson passed away in his sleep this past weekend. He was 72.