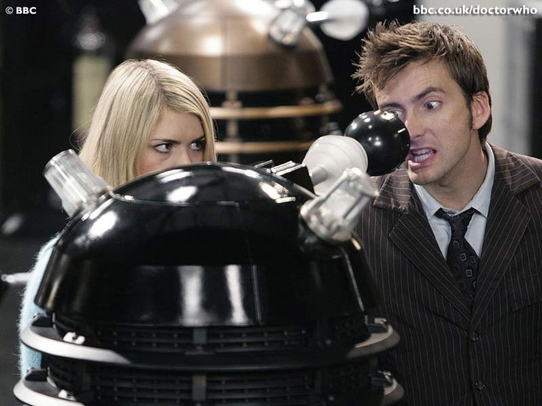 Those of you looking for a review of Army of Ghosts and Doomsday should look here. I’ve been viewing these episodes soon after their release in the United Kingdom thanks to the miracle of friends with BitTorrents, but I maintained radio silence on reviewing the episodes until the CBC showed them in order to do my part (however small) to promote Doctor Who in Canada. I couldn’t hold my silence on the two part season finale, however. That was back in July. This week, I’ll give you my overall thoughts on the season.

Hampering the second season’s efforts was the fact that Russell T. Davies didn’t have the same tools in his toolkit. The Daleks? Used up in season one. Further, the decision to hire Christopher Eccleston for one season only and then regenerate the Doctor at the end of it gave the first season a coherent overarching narrative that made for a satisfying payoff. This wasn’t available for season two.

Though Russell T. Davies manfully tried. Torchwood, a super-secret human agency hoarding and tinkering with alien technology, was first introduced near the end of the first season (a reference in one of the Weakest Link questions in Bad Wolf), and elements shoehorned into season two tried to mimic the “bad wolf” buildup of season one. It ultimately failed, for reasons that I explained in this review, and which I may follow-up with again when I get around to reviewing the Torchwood spinoff series.

But the bigger problem may have been the uncertain chemistry between David Tennant’s Doctor and Billie Piper’s Rose. The overarching story that they told caused some of the stories of the season to march in place, contributing to the slightly unsatisfactory atmosphere.

This is not a strike against the actors, as Russell T. Davies has been just about perfect on that score in hiring them. Christopher Eccleston and David Tennant do their jobs well, and wisely play their Doctors differently. Billie Piper is as brilliant as ever, but as a character, her Rose was best designed as a humanizing element drawing the subdued ninth Doctor out of his shell. There is a similar connection between Tennant and Piper during The Christmas Invasion, when the tenth Doctor and Rose are uncertain as to where they stand with each other, but that tension vanishes, and with it some of the sparks between the characters. Tennant and Piper moon over each other like seventeen-year-olds in love, and while this may work for a few episodes before a payoff, a whole season of this can take the edge off.

Beyond Torchwood, the overarching theme of this season is how a relationship between a near-immortal like the Doctor and a very mortal being like Rose simply cannot last. One almost wishes that the season was structured with The Idiot’s Lantern and Fear Her shuffled off to after the two-part season finale, with School Reunion and/or The Girl in the Fireplace shifted to just before Army of Ghosts and Doomsday (although the question of the whereabouts of Mickey make this arrangement near impossible). The Doctor’s bittersweet reunion with Sarah Jane Smith in School Reunion punches up this season’s theme, and The Girl in the Fireplace tells it in microcosm. Both occur way too early in the season for the payoff of Rose’s eventual departure to be strongly connected with them.

This ties in with a Cyberman story that, while workmanlike, fails to impress (and I have to admit I was wishing that the two-parter was more like Spare Parts, impossible though this would have been to achieve) and a season finale which sacrifices narrative for spectacle. The individual stories of the second season are as strong as ever, with a number (especially The Girl in the Fireplace and The Impossible Planet/The Satan Pit) standing among the best the series (revived or classic) has ever produced, but as a season, the payoffs ultimately disappoint. One hopes that the Mr. Saxon theme (introduced in Love and Monsters and The Runaway Bride) is better handled.

But watching the CBC’s feed of Doomsday, I am again reminded of what Russell T. Davies’ strengths are, and there is one story that has been running over the past two seasons that Davies has executed darn near perfectly: the tale of Rose and her friends and family. Rose, her mother, her father, her boyfriend Mickey, are all strong strong characters, well acted, and just when you think that Mickey and Rose’s Dad have been shuffled off to an alternate universe, they return in time for a heartfelt reunion. 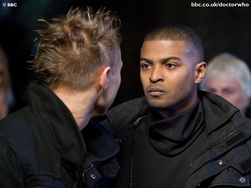 I’ve especially been impressed with the character of Mickey. From cowering behind Rose in the revival’s pilot episode to his petulant realization that Rose is lost to him, to his first tentative steps on board the TARDIS, to his decision to stay behind on the alternate Earth to fight the Cybermen, it is remarkable how far he has come. It’s hard to believe that the Mickey who pulls a Very Big Gun (tm) on what turns out to be the Daleks in Army of Ghosts is the same grovelling Mickey in Rose, but it is, and the journey has been most rewarding. This is credit to both Russell T. Davies the showrunner, and to actor Noel Clarke, who is really into the character and conveys so much with just a look (witness his hilarious facial reaction in Doomsday when Jackie Tyler tells alternate Pete Tyler that there’s been no one else after he died).

And then there’s Camille Coduri as Rose’s mum, Jackie Tyler. She’s always been a strong presence, but she grows from the fretting figure to one who wholeheartedly supports her daughter’s decision to live aboard the TARDIS, even if she still frets about it. Love and Monsters really solidifies her character and gives her a strength that is truly admirable.

We’ve never had a companion character’s background explored as fully as Rose’s background was explored here, and this uncharted territory is fascinating to watch, and gradually, you realize that what Russell T. Davies has been writing over the 27 episodes of the first two seasons, is a love story between Jackie Tyler and her late husband Pete. The final five minutes of Doomsday, after the Daleks and the Cybermen have been defeated, are really what this season and the last have been all about. We see the Doctor’s loneliness stripped bare, and we are reminded again of the gigantic waves he leaves in his wake. It is nearly impossible to come away from his final goodbye to Rose without a tear in one’s eye, and we are reminded: Rose, Jackie, Pete and Mick, of just how much of an influence he has had in their lives — ultimately, influence for the better. It is an iconic moment, seeing Pete Tyler and Mickey Smith standing in the background, as Jackie rushes to comfort her daughter.

It is a triumph, albeit a bittersweet one for the Doctor. And it is a triumph for Russell T. Davies’ abilities as a storyteller. This, surprisingly enough, is the real story that has been at the heart of the last two seasons of the program. And unlike Torchwood, this one got a delightful payoff. And, of course, the mood of the series turns on a dime at that point, as poor Donna from The Runaway Bride gets dumped on the Doctor and he doesn’t know how to react. It’s a scene which leaves us laughing, and it’s a reminder of the breadth and depth that Doctor Who is able to achieve.

As I said in my review of The Runaway Bride, the darkening of Tennant’s Doctor that comes from his separation from Rose bodes well for season three. It’s harder to guess where things will go, because Davies has cleared the slate. He has laid some groundwork, however: the imaginative Dalek Sec is available as a villain, and The Runaway Bride suggests that the Doctor needs someone to hold back his more inhuman tendencies.

However, the third season will debut with fewer expectations than the second. Doctor Who has now had two seasons of entertaining stories. It has demonstrated that its mix of comedy, drama and horror, not to mention its combination of new monsters and old, can work. And rather than trying to top himself, perhaps Davies can simply work on telling a good tale. I, for one, and looking forward to seeing what he can do.

My Rank for this Season’s Episodes