Love Your Characters (or The Unwritten Books: Where Do We Go From Here) 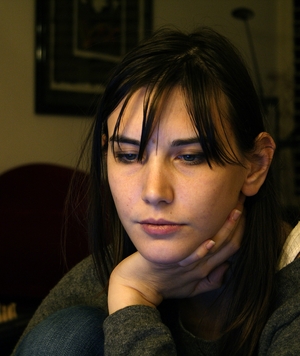 This image is entitled Sara in cogita and is by Caleb Sconosciuto. It is used in compliance of his Creative Commons license.

And, I think it’s an excellent image for Perpetua, don’t you?

This post is a two part question with a lengthy one part answer (sort of). Back on February 19, when I announced that the page proofs for Fathom Five had arrived, Dave Simmer of the ever cool Blogography asked:

And have you already started Book Three of the “Unwritten Books”??

Meanwhile, at around the same time, Rebecca Anderson asks her readers:

I’ve been thinking about characterization a lot lately, and a thought occurred to me.

Agents and editors always say that when they read manuscripts they are looking for great characters to fall in love with — on the whole, that seems to be the number one thing that determines whether they will or will not make an offer. And to a large degree I’d say they’re right to feel this way. Certainly if a manuscript has weak, contemptible, or otherwise annoying characters then nobody is going to enjoy reading it; and if the characters are merely flat or stereotypical then it’s going to take a real blockbuster of a plot to save the story. And when you come across a truly dynamic and delightful character… well, I can easily imagine how that would make a manuscript jump right out of the pile at you.

How often do you, in reading published books, actually fall in love with the protagonist? If you’re an HP (Harry Potter) fan, for instance, did you keep reading HP/SS because you just adored Harry so much you couldn’t put the book down until you knew what happened to him? Or is it really the whole idea of the story, of which the hero and heroine are just a part, that makes you keep reading?

Maybe I’m strange, but when I think back on all the books I’ve read and enjoyed over the past few years, I can only think of a handful of characters that grabbed me so hard I just had to keep reading to find out what happened to them.

In answer to Dave’s question, the third book is already done, barring revisions and editing. I’m a little leery of talking about it because it’s not been confirmed by the editor and I don’t want to push my luck, even though we applied a series name (The Unwritten Books) to Fathom Five, but if you keep your fingers crossed, we may see the book come out some point in 2008.

The third book is entitled The Young City, and if you look back through my Rosemary and Peter posts, you’ll see my progress through it from the beginning of my blog, to the completion of the first draft. The story is set two years after Fathom Five, with Peter and Rosemary still very much in love, and about to head off to college. However, when they are helping Rosemary’s brother Theo into his basement apartment near downtown Toronto, Peter and Rosemary fall through a hole in the floor, climb out of a sewer, and find themselves in 1884. For the next three months, they’re forced to pose as a married couple in a one-room apartment as they gather the supplies they need to try and get back.

This story was inspired by the story of Taddle Creek, an old creek that used to flow through downtown Toronto before it was boxed in and turned into a storm sewer. The last section of Taddle Creek (running through the University of Toronto’s grounds) was buried in 1884. But after using Taddle Creek as the conduit to send our heroes back in time, the story split apart into several directions. There’s the issue of Peter and Rosemary forced to mimic an adult life after dancing around it for some time. There’s the story of the brother and sister shopkeepers (Edmund and Faith Watson) who take them in, and there is a villain named Aldous Birge using the storm sewers of early Toronto to smuggle goods beneath the feet of the cops, and stumbling onto portals back to the modern world.

I started writing Fathom Five and The Young City at around the same time, and they were inspired by the same basic idea that inspired The Unwritten Girl, back when it was called Rosemary and Time.

Here’s the story. Rosemary and Time owes a lot of its existence to Madeleine L’Engle’s A Wrinkle in Time. Back in the summer of 2001, I was rereading the Murry-O’Keefe stories. Most of you may have read A Wrinkle in Time and are probably aware of A Swiftly Tilting Planet. You may not know that there are eight books in total, following the adventures of Meg Murry and Calvin O’Keefe from their first meeting as thirteen-year-olds, through to their eldest daughter Polyhymnia’s eighteen year birthday (a full history of the Murry-O’Keefe family can be found here).

Well, reading A Wrinkle in Time, I got caught up not only in the fantasy story of the monstrous IT and the clockwork planet of Camazotz, but also in the developing friendship between awkward Meg Murry and troubled Calvin O’Keefe. So, I moved to the next book in the series, A Wind in the Door, which featured Meg Murry and Calvin O’Keefe at sixteen, and obviously falling in love with each other, despite miles of denial. I was looking forward to seeing the relationship develop, and was quite disappointed when the next book to feature Meg in any great degree, A Swiftly Tilting Planet, showed her as twenty-four, married to Calvin and expecting her first child. Even Many Waters, which is set at a time when Meg is 19, focuses instead on her twin brothers, and doesn’t mention Calvin at all.

Madeleine, I said, you missed a step.

This was only one small part of the process. Many other inspirations and ideas came together to create The Unwritten Girl, and Fathom Five was actually a late addition that got slotted in before The Young City (it replaced a story exploring Peter’s family heritage, using a Chinese dragon), but Peter and Rosemary’s story was directly inspired by my desire to see a relationship like Meg Murry and Calvin O’Keefe’s fluorish. For this reason, after I’d finished writing the first draft of Rosemary and Time and sent it off to its first publisher for rejection, I kept on writing The Young City and Fathom Five. This, of course, went against every piece of advice writers could give — if you finish a story and you don’t know if it will sell, you don’t write a sequel to that story because if the first story doesn’t sell, you’ll never sell the second and that’s two books that end up just lying around (or, in my case, three).

But for me, after Rosemary and Time’s first draft was finished, the story wasn’t. I wanted to see where Peter and Rosemary would go, and that compelled me to keep on telling the story, even if just for my own benefit, through books two and three.

My early plans called for a fourth book, incidentally, the Swiftly Tilting Planet model, featuring Peter and Rosemary as adults, married and expecting their first child. I had originally thought about adapting Shepherd Moons, but eventually gave up on that because the story belongs more to Cameron than it does me. Even so, Shepherd Moons is the reason why Rosemary has a little sister named Trish, who pretends to be an airplane in The Unwritten Girl and is playing with her toy helicopters in Fathom Five. Right now, Peter and Rosemary’s story feels finished with The Young City. I’m working with other characters now. A fourth book might materialize, but it would take a particularly strong inspiration, I think.

But this answers Rebecca’s question, I think. In my opinion, characters aren’t just everything, they’re pretty close to being the only thing. Back in 2002, I attended CANSCAIP’s Packaging Your Imagination seminar, where aspiring and published childrens’ writers, illustrators and performers get together for a series of seminars on the craft. One of the seminars featured Ted Staunton and a discussion on creating series, and one of the exercises we had was to come up with ideas about series. Well, we struggled gamefully, and many of us came up with ideas of series around spaceships, non-fiction concepts, a particular town or city, but the ideas that seemed the strongest were those centred around a particular group of characters. You can create a series around a particular concept or formula, and it will grow stale over time, but characters provide a much stronger link between books, even as they encounter different plotlines and concepts. And, more importantly, characters can grow. They can change. They can evolve the formula so that it stays fresh, while still providing the essentials that get readers into the series in the first place.

I realize I’m largely speaking for myself here and my favoured genre. There are loads of books out there which are about interesting ideas. Robert Sawyer’s Hominids is a good example of a book of ideas, and Erin and I find it particularly boring, since a fair chunk of it is just characters sitting around talking about those ideas. Or, maybe not characters so much as stand-ins for the author. Harry Turtledove is an incredible one-trick pony, author of a major series of books describing in detail what could have happened to the world if the Confederate States of America had won the civil war, as well as a bunch of minor series asking similar what-if questions throughout history. But I suspect that he would not have been half as successful in his work, if he didn’t tell his story through the eyes of a wide range of characters who experience history as it happens. Crime series fiction lives or dies on the strength of its main protagonists, be it Chief Inspector Morse, Benny Cooperman or Philip Marlowe.

However, Rebecca specifically asks “How often do you, in reading published books, actually fall in love with the protagonist?” Well, not always. However, the secret to the success of J.K. Rowling’s Harry Potter series, in my opinion, is not its plotting, nor its protagonist, but its universe. Ms. Rowling is deft at creating the magical world that Harry, his friends and his enemies interact in. And here’s the key: the universe is, in its own way, the characters. Rebecca got caught up in the story of Snape, after all. Plenty of fans write fiction around Ron and Hermione’s developing relationship. Even the shops and the shopkeepers themselves have a kind of life to them that draws us in. These are all characters and characteristics, without which Harry Potter would become a dry and boring tome. In my opinion, you could have the best ideas in the world, or the best fantasy world in the world, but without compelling characters to look up in wonder, your readers won’t see the world they see. They’ll only see your prose.

So, is character everything? You betcha.

Harry Potter and the Ride of the Valkyries

“When you’re tired and travelling a lot, sometimes I get up in the morning and I have to look at a phone book and see which city I’m in.”

-Peter Mackay responds to reporters after the East Coast Music Awards in Halifax in which he flubbed his own presentation by welcoming the audience to Toronto.