When Chicago is Irish 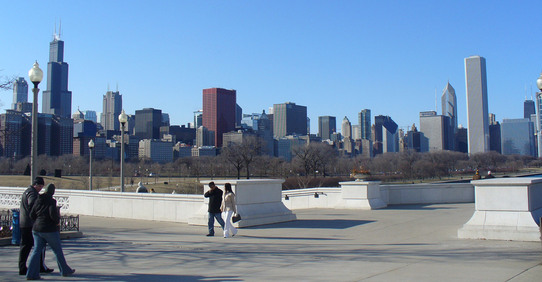 Busy day, as you can well imagine. And Vivian has been such a trooper.

We left Kitchener for Chicago Thursday after work, expecting Vivian not to like the lengthy car journey, at all. Except for some screaming around dinner time, near London, Vivian either slept or watched the passing scenery, leaving me to drive and Erin to do a little writing. We made it past Lansing Thursday night (we’d been expecting to make it only to Flint), and we were in Chicago by mid-afternoon.

We’re staying at a place called The Write Inn in Oak Park, near the Hemingway Museum and other buildings which Ernest had a lot to do with. Oak Park is a very well-to-do suburb west of Chicago, built that way following the Great Fire. When planning out the town, the founders said that everybody was welcome, but they could only build homes with five bedrooms. Hmm… Since then, the buildings seem to have been subdivided, but the town remains noticeably richer than the rest of Chicago. I’d live here, but I’d have to contend with the remaining sense of exclusion. Oak Park is a lot whiter than the areas around it.

Frank Lloyd Wright cut his teeth here, and a number of the homes are his original design. We’re going to go on an architectural tour tomorrow.

Anyway, Erin, Vivian and I are in town with Erin’s mother Rosemarie and her husband Michael to attend the St. Patrick’s Day festivities where about a million Irish and wannabe Irish paint town green. Or try to. And I’m not kidding about that million number. We went down to the Chicago River to see the annual dyeing of the river. Unfortunately, technical problems or something prevented the dye from being released. Undaunted, we followed the crowds of people through Chicago’s new Millennium Park and caught the parade. Then we went to the aquarium where Vivian got a little spooked by the sharks (who wouldn’t be? The aquarium has this perspex glass that is so clear, it’s like you’re standing in the water next to the fish), and then it was a short hop on the El to check off another food from our list.

As I’ve mentioned, I’ve developed a fascination with local speciality dishes, especially sandwiches. In Kansas City, it was Arthur Bryant’s Burnt Ends barbecue sandwich; in Iowa, it was beef briscuit, in Indiana it was Maid Rite’s loose meat and in Montreal it was Schwartz’s Deli. Erin was kind enough to do some research ahead of this trip, and discovered that, after deep dish pizza, Chicago was best known for the Italian Beef sandwich.

An Italian Beef sandwich consists of beef, finely sliced, marinated with garlic and slow roasted in its own juices. Dished up wet on a bun with your choice of roasted bell peppers or a hot-pepper goulash, the sandwich is, bun and all, dipped into the au jus gravy and wrapped in wax paper. The bread gets soppy with the delicious gravy and the meat is so finely sliced, it’s almost a hash. And that’s that: the best sandwiches are often the simplest ones.

Erin’s research identified a restaurant on Chicago’s north side called Mr. Beef, but we were disappointed to come all that way to find the place looking abandoned. We were fortunate enough, however, to walk a couple of blocks and come across another place that just happened to be on our list. Al’s Italian Beef welcomed us with sopping sandwiches, and Erin and I enjoyed it enough that we decided to order and split another one.

After dinner, we were all quite tired, but we decided to take a trip up to the Sears Tower’s observation deck. As with the CN Tower, we complain about the admission prices, but you forget about that when you get to see the city beneath you.

And that was it. We stumbled back to Oak Park, and it wasn’t long before Vivian was in bed. We really pushed ourselves to play the tourist today. Tomorrow will be a day for taking it easy.

And, I’d wager, that goes double to those out celebrating St. Patrick’s Day.

Happy St. Patrick’s Day to all of you. 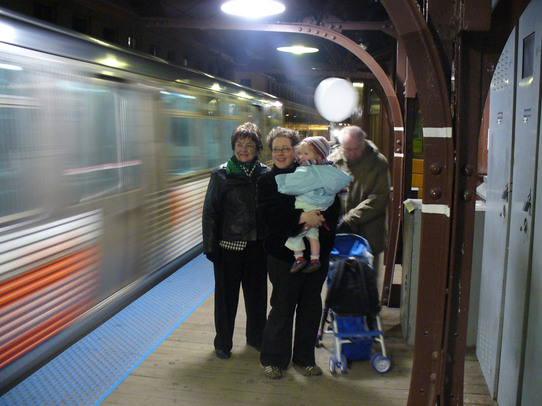