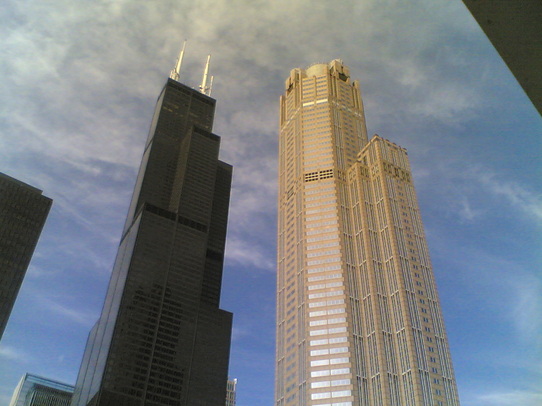 Here are some more photographs, shot from my cellphone camera, of our Chicago trip. As you might expect, the elevated featured prominently for me. :-)

On Sunday, I took some time to myself to ride the El. Erin was most gracious in allowing me to go, but reserved the right to snicker.

But I can’t help it. When I see the great cities of the world, I will be paying a visit to their Metro/Subway/El/LRT systems. I find travelling these systems to be interesting in their own right. You get a cheap tour of the place — you see different people, different surroundings — without having to pay attention to traffic. And Chicago’s El offered me quite a cross-section.

Before we headed back home, the grandparents took care of Vivian while Erin and I took an architectural boat tour up the Chicago River. Nowhere has Chicago’s renaissance more visible than here, with major new condominiums and office towers going up around the old skyscrapers going back decades. A lot of work has been done to improve the Chicago River, turning the areas beside it into valuable property. Formerly the sewer of the city, Chicago’s efforts have been rewarded with an upgrade of the river by the EPA from “toxic” to merely “polluted”. That’s still quite an accomplishment.

Our boat tour took us under several bridges and pointed out several towers from several different periods on architectural history, and this leads me to conclude that while Chicago and Toronto are very alike in character and diversity, Chicago has it all over its Canadian counterpart when it comes to celebrating its architectural heritage. Then again, any city able to boast the homes of Frank Lloyd Wright, Louis Sullivan and no less than three schools (theories) of architecture, is going to have it all over just about anybody.

The boat had a series of metal struts (perhaps to hold a transparent canopy) that got in the way of many of our shots, but they were vital in telling us how much clearance we had, because those things often passed less than six inches below the lower struts of the bridges we ducked under.

The total cost of this one hour tour was $48 ($24 each), but it was worth every penny. So much architecture, from an angle rarely seen on the streets of Chicago.

The highlight of the tour was an up-close view of the Sears Tower. The guide was also full of stories about local history, including the truth behind Mrs. O’Leary’s cow (it was framed).

All told, a wonderful visit.