The Icons of Washington 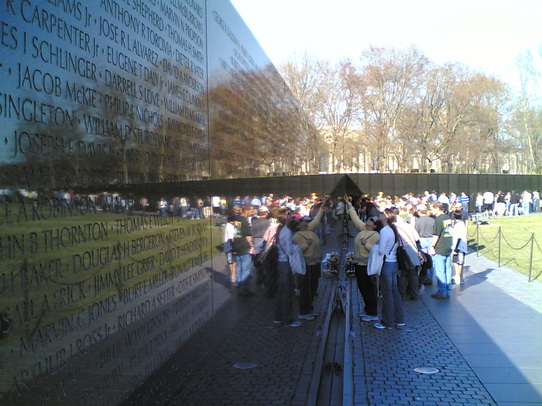 The United States is a nation forged by war, tempered by war, and ultimately haunted by war. At least, that’s the impression I come away with after walking the Washington Mall yesterday.

This was my choice. Erin and Marguerite were, frankly, not emotionally up to seeing all of the war memorials again (I’ll be visiting Arlington alone), although they were happy to visit the Lincoln memorial. There was some talk about visiting the tidal basin, but the cherry blossoms weren’t in bloom. I was in the mood for seeing the icons of Washington — the buildings you always see on CNN and PBS but never think you’ll actually visit. So, they walked the Mall with me, visited the World War II memorial and the Lincoln memorial, but gave the Vietnam memorial a pass, leaving me to walk through it alone. Now that item has been checked off my to-do list.

That last sentence sounds facetious and it isn’t meant to be. The Washington Mall is a remarkable place that I think any tourist visiting the city is likely to return to again and again (among the multicultural mix of tourists we encountered were five Buddhist monks, possibly from Nepal). There are the dozen or so museums of the Smithsonian surrounding the great open space, for one (all free), but then there are the famous monuments, the Washington, the Lincoln, the war memorials. And you start to get a picture of how schizophrenic the United States is, sometimes. It’s a comparatively young country with a history as long as the great powers of Europe. It is a country of tremendous peacetime accomplishment and periods of great tumult. It is a country that is torn between celebrating its victories and mourning its dead. Nowhere is that dichotomy more plain than in comparing the Vietnam war memorial with the newly constructed World War II memorial, and to a lesser extent comparing the Lincoln memorial to the Washington monument.

I had heard a lot about the Vietnam war memorial, but until I saw it for myself, I didn’t realize how overwhelming it is. It’s a wall along a path that dips below the level of the ground. A wall of reflective black stone grows from about an inch to a few inches, to a couple of feet, and starts to display the names of soldiers that died in the conflict (the names are in order of death, from 1959 to 1975). Pretty soon the wall towers over you, and you are overwhelmed by names, and you start to appreciate the enormity of the conflict and its impact on the American people.

Even more stunning are the personal tributes that get left at the base of the wall by mourners, including photographs, hand-painted flags, flowers, even fruit. People file pass the names quietly, touching some, taking pencil rubbings of others. Even thirty-two years after the end of the Vietnam war, families come to visit. Park Rangers have palm pilots containing every name listed in the wall with their approximate locations, so that family members can find their loved ones. The National Archives has taken and catalogued every item left at the base of the wall, which will make quite an exhibit for the proposed visitor’s centre. It is, without a doubt, one of the most moving monuments I’ve ever experienced, ably balancing supporting the troops with morning their passing.

At the other end of the spectrum is the World War II memorial — a long overdue installation that, unfortunately in my opinion, is a little tone deaf in terms of commemorating the sacrifices of the over 291,000 soldiers who gave their lives fighting the Axis powers. Erin calls the installation akin to “Triumph of the Will”, and while it’s true that the Second World War was a great victory for America and the democratic world, you don’t get a sense of the human sacrifice that made this victory possible. And, tellingly, the people enjoying the monument’s admittedly stunning vistas were far less reverent than they were at the Vietnam memorial, even though to duplicate the Vietnam memorial’s impact using World War II casualties would require a structure six times as large.

Reverence was also in play at the Lincoln memorial, which honours one man and his tremendous impact on the country. While larger than the World War II memorial, the Lincoln memorial manages to convey the great sacrifice of the period. I believe this is done by playing with scale. The Lincoln statue is huge, but it looks lonely within the even larger temple built around him. A simple epitaph to commemorate him, along with carvings of the Gettysburg Address and his second inaugural speech, complete the effect. It’s likely that the Lincoln memorial was a controversial construction, and I suspect that of the many visitors to the site, a minority came from the Confederate states, but the monument doesn’t wallow in the north’s victory over the south. Perhaps because too much was lost. Still, somehow the builders managed to convey the importance of the victory and the great sacrifice in stone.

And, then across the reflecting pool and past the World War II memorial, is the Washington Monument — a construction wherein the architects may have taken the phrase “father of our country” a little too literally. But I don’t think you could call the monument tone deaf or even vulgar, innuendo aside. Washington died in his bed after seeing his country set on its journey into the future. He probably would have enjoyed the informal baseball game that was going on at his base.

Monuments engage people in so many different ways. What they say, how they say it, and what they are talking about influences whether people get to play at the base of these things, or stand in awe, or have to be sternly told (as was the case at the World War II memorial) not to splash in the reflecting pool. Some monuments know how to address the thoughts their visitors have of the events they are commemorating, even if the visitors haven’t quite figured out their thoughts for themselves. 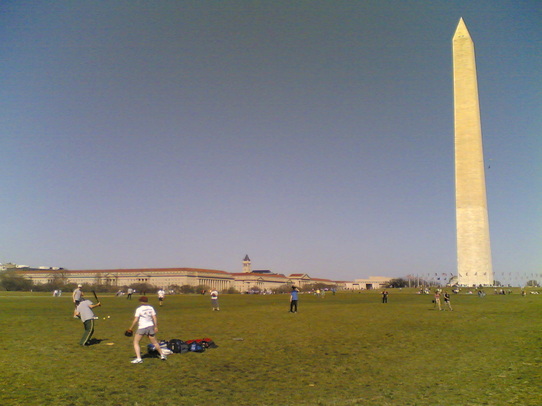 And tomorrow, I’ll tell you about riding the Metro and eating Washington’s famous sandwich…