Threading the Needle Between Stratford and Woodstock 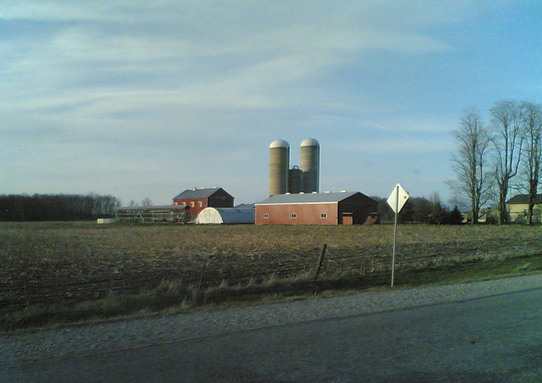 As you may remember, one of the ways we find time to write is by hopping in the car and driving. This is an offshoot of how we used to write before Vivian was born; our idea of a good time being driving to a coffee shop somewhere and spending some time there writing. Now, Erin writes as Vivian sleeps in her carseat and, once we get to a bookstore with an attached coffee shop, I get some writing, while Erin and Vivian romp around the bookshelves. It’s a good arrangement.

Of course, Vivian doesn’t nap forever. So, we’re tied down to a set of locations we can access within a sixty to ninety minute drive, and from Kitchener, that typically puts us down to an Indigo in Burlington, or a Chapters in Ancaster. These are perfectly fine establishments, but it would be nice to have a bit more variety now and again.

(As an aside, I would love to support independent booksellers, but we are limited in the establishments we can pick. It has to have tables, which typically means it has to have a coffee shop. And it has to have a place where Vivian can enjoy herself, which suggests a bookstore with a significant children’s section, and Chapters/Indigo seems to have the market cornered in this regard. If anybody knows of any good coffee shops or independent stores that fit this arrangement within an hour’s drive of Kitchener, let me know.)

Well, two weeks ago, I discovered a new route. Rather than driving southeast towards “civilization” in the Greater Toronto Area, how about going west, towards London? And since we’ve driven the 401 (boring) and Highway 7 through Stratford often, what about a back way that avoids the major urban centres between Kitchener and London? Is it possible?

Turns out it is. Following a route that takes me through the villages of Drumbo, Innerkip, Embro, Kintore and Thornbury, I stumble upon the north end of London, and discover a Chapters with a larger than usual Starbucks attached (we haven’t stood around waiting for a table to free up yet, fingers crossed).

This route takes me through central Oxford County and northeastern Middlesex, which I suspect may be the real rural southwestern Ontario. I’ve driven back and forth along Highway 7 and Highway 401, and the industrial pull of Toronto can be felt adjacent to these highways. Stratford does a billion dollars a year in heavy manufacturing; even though it’s the pork capital of Ontario, the farm buildings look like they’re owned by people keeping their options open.

The back way to London is decidedly rural. The farms here are prosperous and know for sure that they’re going to be around for the next few decades. The pace of the roads, of village life, is slower, as cars navigate around some hefty farm equipment that would scare the trucks on the 401. And the towns themselves keep to themselves. They’re solid, and not dependent upon the tourist trade. Drumbo self-deprecatingly calls itself the Detour Capital of Ontario, possibly because most of its tourist business comes when an accident shuts down a segment of the 401.

Coming back from London, with the sunset lighting up the ploughed fields, I can see that this is one of the few areas close to my home that is still free from urban influence. And I hope it gets to keep its character for some time to come.

And now some pictures of Vivian: