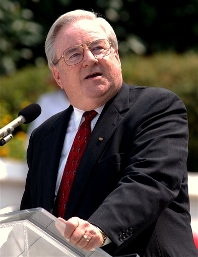 I have often used Jerry Falwell as an example of all that is wrong with Christianity: the homophobia, the holier than thou attitude, the ignoring of God’s message to love one another, including and especially those who don’t worship the same way you do.

In the days following the September 11 attacks, Jerry Falwell launched into a diatribe, blaming the attacks on the moral decay wrought by feminists, liberals, and homosexual groups. He later apologized, but his political career has been a long stream of controversial statements. He even likened himself to “a lightning rod”, which he was: one that coloured the public face of Christianity into something reactionary and intolerant.

Jerry Falwell passed away today. He was 73. And some commentators are dancing on his soon-to-be-dug grave. But I think a more fitting epitaph comes from Allyn Gibson, an atheist and blogger in North Carolina, who responded to a post I had written, likening Jerry Falwell to the AntiChrist. In Allyn’s words:

My parents used to live in Lynchburg, and when my father had a heart attack in 1996 Falwell came to the hospital. My parents attended a different church, I’m not even sure why he came, but he did, and he and I have spoken on several occasions since.

I guess, behind the public figure, there is a private individual who can be quite different. I don’t have anything to add to Allyn’s comment. Except to say: though I disagreed with much of what you are on record of saying, Mr. Falwell, rest in peace. You deserve it. It would be unChristian to think otherwise.