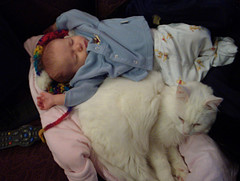 Before we head off to Vermillion, South Dakota, I’m pleased to announce that Gus, our cat, has been found. A neighbour spotted him yesterday and locked him in the garage. With my folks out in Ottawa, Dan came over to pick him up, and there’s a story there. For one thing, Dan is allergic to cats. For another, Gus managed to squirm out of the carrying case that Dan put him in, and the chase was on. But Dan and the neighbour managed to keep Gus in sight, and now he’s home, waiting for us.

Filthy, apparently. There may need to be a bath involved. Which will probably make Gus want to leave home again. But apparently he purred a lot once he was home.

Dan called to give us the news just before taking a shower. And lots and lots of Benadryl.

It’s a full house here in Lincoln as a number of Judy’s sons (Erin’s step-brothers) are home with us, en route to various other destinations. Fortunately some of the kids are avid campers, so I helped out put a tent out back to house some of the people. Yes, me, putting up a tent. I’m pleased (not to mention a little amazed) to say that said tent didn’t blow down during the night. Admire my l33t outdoorsy skills.

The memorial service was very nice. The Holy Family Shrine is an amazingly beautiful location. And it’s hard to believe that it’s two years already since Wendy’s death. Time passes, eh? But then, I’m well acquainted with the oddities of time. I am amazed at how quickly Vivian has grown up. I’m already encountering toys and clothes that Vivian has discarded and going “aw! Wasn’t she so cute when she could fit into this”, and then going “holy cow! That was just six months ago.” Time is passing rapidly; but at the same time it feels as though Vivian has been forever.

So, while most of the Noteboom-McMIllan family was here yesterday, we decided to light a few sparklers and fireworks in honour of the fourth of July, and I discovered again that fireworks today are not the same as the fireworks of my youth. I commented that the sparklers I held in my hand weren’t the metal sticks I was used to but, oddly enough, wood (bamboo). And I was told that the switch occurred because of a big hullaballo about the metal sticks getting hot, and burning kids’ feet when they step on discarded ones. These bamboo sticks are safer.

Yeah, safer when they curl up in the heat and little flaming pieces of wood fall off onto your shoes.

The real problem is that these things are designed to burn, or go boom, or both — not features typical of your everyday household toys — and people don’t treat them with the requisite respect. It’s a design flaw of fireworks full stop, especially in a country whose national character is defined by (in my father-in-law’s words) mixing booze with dynamite and seeing what happens.

And I couldn’t help but notice that we all got a little silly handling these sparklers. Indeed, I had three in one hand which I decided to light simultaneously and hold very close together. The resulting super-sparkler was super, super bright indeed. Something of a fireball, in fact, which I had to throw on the concrete before it burned my hand, bamboo holder or no bamboo holder.

So I’ll be offline most of the rest of today and all of Monday. I had a wireless hotspot for most of my trip, but I’m typing this message on a loaned desktop computer with a cable connection to the Internet. The next house I visit won’t have Internet. Then it’s back to Des Moines on Monday night, and home on Tuesday. And work begins on a promotional project that I’ll tell you all about come Wednesday.