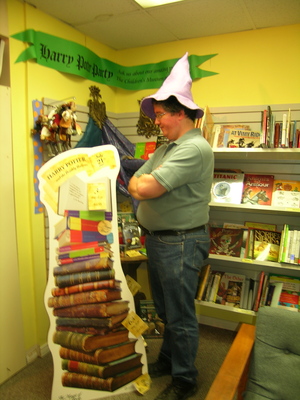 I had to nip into Toronto for a quick errand yesterday, and I took advantage of the opportunity to pay a visit to Another Story Bookshop and make sure the arrangements were all a go (they are).

The reason I had to drop everything, leave Vivian at her grandparents, and head into Toronto was because the media release has generated some interest. I’ve talked to a couple of reporters, including one for the National Post, and they wanted a picture of me standing outside of the shop.

So I went, and was greeted by a photographer who was wearing a safari jacket that looked as though he’d just come from snapping pictures of cheetahs chasing down gazelles in Africa. He seemed a bit bemused by it all, but when I explained what was happening, he got into the spirit of the thing and had me sit on the sidewalk as though I was doing a sit-in. And he caught something I’d missed: the store’s name is prophetic. “Another Story” is a perfect title to have in the background when you’re gently suggesting to Harry Potter fans that there are other stories that they could read.

On Friday, I spoke with Eli Glasner at the CBC who was preparing a story on the Potter phenomenon. If he was able to use any of the material I gave him, you’ll be able to hear me on the World at Six, either Thursday or Friday, I’m told. And this Thursday morning at around 7:40, I’ll be live on air over the phone with the morning show crew of CHML-AM900 in Hamilton. Assuming that nothing happens to pre-empt things, which is always a risk in the news business.

So, now I have to get the placards together, and try to come up with suitable photographs for a website that wants to do a write up. It’s going to be a busy week, but I’m having a lot of fun.

(Update: 8:54 a.m., Thursday): So I spent a good five minutes live on the air with Shiona Thompson, talking about the event. I managed to plug my books, as well as those of the Vancouver authors, so the publicity was appreciated. Eli Glasner also writes to say that his report should appear on today’s World at Six, so give it a listen. Finally, there’s an excellent write-up (including a picture of me in my wizarding hat) in the Torontoist blog. Many thanks, everyone!

(Update: 10:33 a.m., Thursday): My interview with CHML has been put online on their Featured Interviews list. Feel free to listen in.