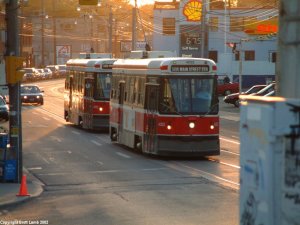 For transit riders and enthusiasts, this has been a frustrating day. Just about every Torontonian, regardless of their political stripe, agrees that transit service in Toronto is inadequate. Just about every Toronto politician, and even people outside of the city, regardless of their political stripe, acknowledges that the city needs more buses, more streetcars and more subway trains at every station and every stop.

And yet, at the end of the day, the City of Toronto, like every other municipality in Ontario, cannot run an operating deficit. At the end of the day, the books have to balance, and if the city has to close a half-billion dollar gap next year, then cuts will have to be made. The politicians made their bed, and now some are bleating over the unfairness of having to lie in it.

Many politicians and other individuals find it easy to blame Toronto for its own problems. The city doesn’t have a control on spending, they say; they need to get their fiscal house in order before they come calling to the rest of the province. This is an easy thing to say, but structurally, it is a much harder thing to implement. About half of the City of Toronto’s expenditures are set by the provincial government by fiat, just like all other municipalities in Ontario. Social services are mandated by the province and have to be administered by the cities and paid for out of the property taxes. There is no room for cuts there.

Of the remaining half, you have the cost of operating one of the least subsidized (per capita) transit agencies in North America, whose service is about a quarter less than what it was 20 years ago, even though it’s carrying about as many passengers. You have the cost of operating the police and the fire services (McGuinty, to his credit, uploaded Ambulance services). You have potholes to fix, streetcar tracks to rebuild, buses to replace, not to mention new infrastructure to build.

So while there is waste that can be found and get all righteously angry about, there is nowhere near $500 million amount of waste to cover the projected deficit next year, or try to get ahead on the service cuts and actually make improvements to public transportation.

And then there is the $120 million per year that Toronto property taxpayers pay into Ontario’s education system — money that doesn’t flow back into Toronto’s schools. And not to mention the $1 billion in reserve funds removed to keep the city solvent over the past four years.

The taxes the City of Toronto considered implementing may not have been the best ones to close the fiscal gap, but the situation was known to be dire before Monday, and the political grandstanding engaged by the 23 Toronto councillors to try and use the provincial election to bail them out was irresponsible. It is true, though, that despite the new powers accorded to the city by the City of Toronto Act, the city’s responsibilities remain out of line with their sources of revenues. The result is a perpetual handicap that hobbles this key engine of the provincial economy.