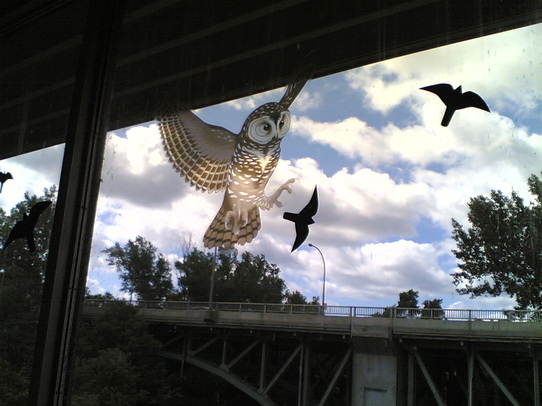 Before I go into this post, I want to remind Doctor Who fans watching the episodes on the CBC that the latest episode is tonight at 8 p.m., Evolution of the Daleks. Comments are still open on my review from back in April, so if you have things to say about it, leave your thoughts there.

After the events from Friday at midnight, I returned Saturday at noon for my promised reading from various books that could ease the Potter withdrawl symptoms. Unlike the midnight event, which attracted over forty fans at one go, there were no crowds, but a steady stream of customers filtered in and out, staying a while to listen to a portion of the readings. The storekeepers and Cameron were there the whole time, which gave me someone to read directly too.

My choices included Kenneth Oppel’s Skybreaker, my mother’s latest book, The Ruby Kingdom, fellow Potter squatter kc dyer’s latest book, Ms. Zephyr’s Notebook, and I finished with a short section from The Unwritten Girl. (I’ll be writing up a brief review of these books plus others that Harry Potter fans might enjoy later, if anybody is interested) The people seemed to enjoy the readings, and I had a good time.

Afterward, Cameron, Erin and I walked over to High Park where Vivian enjoyed herself on what has to be one of the most amazing playsets in Ontario. Then we retired to the Bloor West Village for dinner and then Erin, Vivian and I drove home, getting in pretty late. All in all, a nice weekend out.

I am pleased and pleasantly surprised that my promotional idea got the attention it received. I got to read a portion of The Unwritten Girl on CBC Radio’s World at Six, I got a write-up in the local community newspaper, I did a live interview on Hamilton morning radio, there was excellent blog coverage, and my picture appeared in the National Post’s Toronto weekend magazine. My fellow Potter protesters (who took the title “Potter Poopers”) also received a profile on CTV’s local news out in Vancouver.

So that’s about it for the Potter weekend promotion. I have an interview tonight with the community radio station CKWR. This was arranged some time ago and will feature myself and Erin as we talk to Alanna Higgidis of the Waterloo Public Library about our writing life. Any other promotional events which take place this summer will be piggybacking onto promotional work on Erin’s book, The Mongoose Diaries as her publisher wishes to capitalize on the writing family aspect as a media hook. Erin will be reading up at the Newmarket Chapters on August 11, but I’m just going to be there for moral support.

I have to thank J.K. Rowling for this opportunity. I wouldn’t have been nearly this successful at getting Fathom Five onto the media radar if she hadn’t been so wildly successful. This was a once-in-a-lifetime opportunity, and I had a great time.