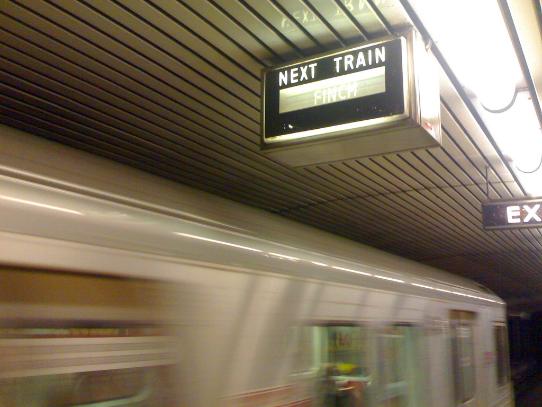 The above photograph is entitled “Next Train: Finch” and is by Richard Eriksson. It is used in accordance to his Creative Commons license. (See his official site here).

I’d like to thank the teachers and students of The York School for welcoming me yesterday as I was called in to give a presentation on public transportation in Toronto. Thanks especially to John Mazurek for organizing this and for thinking of me.

I’m a little overwhelmed by the idea that suddenly I’m enough of an “expert” on public transportation to give speeches and Powerpoint presentations to a room full of students. When John asked me, I e-mailed him back, saying:

You should be aware that I do not have much in the way of formal training in the public transportation realm. I am an interested observer, a public transit fan and a proponent for improved public transportation in general, with an emphasis on light rail and (where affordable) subways. I have a bachelor’s degree in Environmental Sciences, having studied at the School of Urban and Regional Planning, but I’ve had no chance to put my education into practise in the planning world, following instead a career in database management and (more recently and more rewardingly) writing and freelance journalism.

But he persisted, and I’m glad he did, as I was honoured and I had a lot of fun. The students were attentive, laughed at my jokes, and asked some excellent questions.

The York School is a private institution in the heart of Toronto, and clearly a top-notch school. Me and my public school upbringing had to fight down a surge of jealousy as I noted that every student was carrying around a school-issued laptop, but it’s obvious they put it to good use.

The students had been asked to come up with a transportation plan for the Greater Toronto Area. John Mazurek told me that they’d already heard from representatives of the trucking industry, experts at York University and people from Toronto’s City Hall. Those individuals will have a chance to review some of the best presentations the students come up with, as will I, and I look forward to seeing it. These kids are being taught to think outside the box, so perhaps the politicians should take note of what they come up with.

I took GO Transit rather than brave rush hour traffic into the city. Also, given what I was speaking for, anything else would have seemed hypocritical. I parked at Burlington GO station. The service is excellent, as always, as one can tell as their quick visit to the parking lot turns into a marathon of fruitless searching for an empty space. Indeed, some of the people who arrived ahead of me had engaged in what I would call some very creative parking practices. And if my previous experience is any indication, they’ll get away with it, as GO Officials who enforce parking regulations seem sympathetic to those who are struggling to find a space to make use of their service (and why not?).

But it illustrates the quandary of adding public transit service to the suburbs. GO Transit proves that people want to take public transit, but they’ve also only managed to move the parking problem out of Toronto’s downtown and onto Toronto’s fringe. We’ve simply pushed the traffic jams back, and while that’s an improvement, that’s still a lot of stress and pollution and congestion to deal with. There’s still too many cars on the road during rush hours, and the final challenge is coming up with a suburban culture wherein one can actually take public transit to their public transit. But that’s not going to happen without a major infusion of funds, or a redesign of our new suburban neighbourhoods so that more people actually live within convenient walking or transit distance to our GO stations.

It has taken us over fifty years to build ourselves into the mess that we see on our roads, and it will likely take us fifty years to build ourselves back into a situation where our automobiles are wonderful luxuries rather than necessities of life. The good news is that our politicians today appear to finally understand what the problem is. It remains to be seen how good their solutions are. Ultimately, though, the task of building the new city is going to fall on the generation behind us — on the very children I gave my presentation to.

A Profile in the Boston Globe

I’m pleased to announce that I’m prominently profiled in Tuesday’s Boston Globe. Vanessa Jones wrote up an article about fan fiction, and how some fan fiction authors were moving on to professional publication. I was interviewed for the article back at the beginning of September, and I talked a lot about my work for the Doctor Who Information Network. And, of course, The Unwritten Girl was mentioned a lot.

I fear I come across as horribly pretentious in the last two paragraphs where it says:

Bow, however, never wrote fan fiction under a pseudonym. In fact, he has uploaded his early work onto such sites as fiction alley.org, sugarquill.net, and fan fiction.net. With two novels published and two more in the works, he doesn’t feel a need to hide that aspect of his past and wonders why anyone would.

“I think personally - and I don’t mean to denigrate anyone who’s written under a pseudonym - it’s an insecurity,” says Bow. “This is what I did; I was writing fan fiction. I did this because I enjoy it. What I’ve done is used something I’ve enjoyed doing and made a career out of it. “

I honestly didn’t mean to denigrate people who write under a pseudonym; I’m was only saying why I didn’t. But Rebecca has since explained why she wants to keep her different aspects separate, so to each their own.

In any event, it’s still cool to be featured in a Boston newspaper.