The Year of the Mongoose 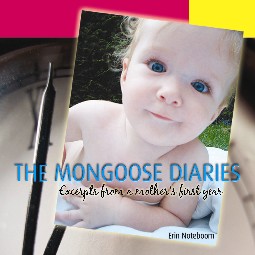 It’s ironic, but we might actually be able to call this the Year of the Book — or, rather, the books. The year 2005 was the year that I learned that my first novel, The Unwritten Girl, would be published, but that was the year everything changed. In 2006, Vivian sort of overshadowed everything. She still sort of overshadows everything, but now she’s in book form, so to speak. Earlier this year, Erin released The Mongoose Diaries, a literary journal covering her pregnancy and the first year of Vivian’s life. The book, Erin’s third, was released to good reviews and some attention, and if you haven’t read it yet, I recommend that you all get a copy. It makes an excellent gift for anybody who is expecting.

I also released a book this year, Fathom Five, the sequel to The Unwritten Girl. It also received some good reviews, and was recently nominated for a Cybils Award, which has garnered it even more reviews. The book didn’t make the short-list, but it was an honour to be nominated nonetheless, and the good reviews told me that I had done a good job.

The rest of my writing has also gone well. I finished the first draft of The Night Girl and burst onto The Dream King’s Daughter. I had a half-dozen articles accepted by Business Edge and I’ve taken steps to broaden my portfolio, which should bear fruit in 2008.

And, finally, there was Erin’s news that she had landed herself a literary agent in the form of Pippin Properties. That’s the biggest news of the year, I think, as they’re a feisty agency whose discoveries have included Because of Winn Dixie, which some of you have assuredly heard of. Erin’s quite enjoyed being courted, and she’s almost finished revising Plain Kate, though it has been a mad rush.

Of course, Vivian was a highlight of the year, and she’ll probably continue to be the highlight of every year, despite imminent competition from her younger sibling. It may be a challenge to keep up the pace of writing after April, since I’m told that adding a second child to the family doesn’t double the work, it quadruples it, but it will be interesting to see where we’ll be in December, how Vivian will be at 3 years old, and in the company of her eight-month-old sibling.

In 2008, I’m looking forward to this and to other fiction projects. Hopefully, The Young City will be published, and I’ll have arrangements made for The Night Girl. Hopefully, we should have good news about a publication date for Plain Kate, and maybe I can have a few other publications to add to my freelance portfolio.

I remain immensely grateful that Erin and I have been able to make a living out of our words. That’s not as easy as it sounds, but it’s necessary to who we are. As my sister-in-law Wendy said, “never buy anything you don’t love”. She later amended that to “never do anything you don’t love.” She had a promising career ahead of her as an artist before her untimely death, and it’s her attitude that I’ve tried to live up to. I used to grump, when I was forced to bow out of the planning profession, that I had to resign myself to never having a building named after me. But I realize now that all I wanted was to do something remarkable, and remarkable things don’t always come in measured in square feet. What’s remarkable is when you make a living out of being who you want to be, in the company of loving wife and children. I’ve been blessed.

And I’m keeping my fingers crossed that things stay that way for years to come.

Turning now to a theme of defying predictions, it’s worth noting that, as 2007 comes to a close, everybody is assessing the year that’s been, and looking ahead to the year that’s to come. Only a few are looking back to predictions made on January 1, 2007 and keeping score.

One of the greater disappointments of this year has to be the tenacity of certain dictators in keeping their positions. Remember the hints that Mugabe’s days might be numbered? He’s still here. Remember the predictions that North Korea was about to collapse as a state, leaving the south to pick up the pieces? The walls haven’t tumbled. The situation in Pakistan? From bad to worse.

Sadly, dictators don’t go easily. That’s one of the things that makes them dictators. So, as we consider the year that was and contemplate the year that’s to come, we should spare a thought to those who continue to suffer in Zimbabwe, North Korea, Pakistan, Darfur and any of the world’s other hotspots where human rights are in retreat. Indeed, we should do more than just spare a thought from our comfortable chairs. Every little bit helps.

Here are the predictions I made on January 2, 2007. Let’s tally up the score, shall we?

1) There will be no federal election until this fall or spring 2008. The electorate is just too volatile for any of the parties to feel comfortable about bringing down the house. When the next election is held, though, I predict another Stephen Harper minority with all the other parties holding the balance of power.

Well, I called this one right. Rick Mercer once said that the biggest thing that was keeping either the Liberals or the Conservatives out of majority power was “they wanted it too much”, and I think he’s right. Early in 2007, there was a lot of election speculation with Conservatives in particular eager to go, but I felt that average Canadians (well, this average Canadian, at least) grew uncomfortable with this lust for power.

Predictions are now surfacing that this minority parliament might survive until the pre-ordained election date of 2009, and it might just happen (hey, it worked for Pearson!). But I do think that the Canadian electorate are opening up to the possibility of an election in February or March. Two years is the normal lifespan of a minority government here in Canada, and even though the numbers are still unclear, that willingness to go on the part of the electorate will translate into a willingness to go from all parties in Ottawa.

The result? Another minority government, I’m sure. I expect we’ll see a round of these until at least 2012.

2) McGuinty will come close to losing his majority, but will be assured of another four years of government. Indeed, I stand by my prediction here.

That prediction is only correct if we consider the shadow campaign during the summer months, when John Tory’s Tories were neck-and-neck with the McGuinty Liberals. But once the campaign was called, and Tory made his “it’s okay to teach creationism in publicly funded schools” gaffe hit the fan, it was all over. My seat count prediction was way off. Which is unfortunate. If a 36% yes vote is a blistering defeat for electoral reform, then why should 42% be the basis for an overwhelming majority government?

Tory seems intent on holding on. He’ll need a seat to get back into Queen’s Park in order to do that. If he can win a by-election this year, I stand by my prediction that he’ll be Ontario’s next premier in 2011. If not, he’s gone, and the Conservatives will have to work all the harder to become relevant in urban politics.

3) There will be further indications that Russia is emerging as a renewed global threat, possibly overshadowing the Middle East. Indeed, look for relations between China and the United States to grow a little warmer as a result.

I think this prediction is chugging quietly along.

4) The McGuinty Liberals will get shovels in the ground on the York University subway extension before we go to the polls, despite the fact that this is not the best investment in public transit the Liberals could make.

That did not happen. What did happen, however, was the most ambitious public transportation plan in a generation, one which almost convinced me to vote Liberal. Now that McGuinty has been re-elected, I am looking to put his money where his mouth is. I’m told that we’ll see construction start on the York University extension this year and next, with substantial progress on the Transit City LRTs to come in 2009 and 2010. We shall see. If it happens, it will be the best move any government has made in Ontario to secure this province’s future. If it doesn’t — well, it will be a broken promise to dwarf the health care premiums, and I will not be amused.

5) Blogs will continue to be born and many will continue to lapse, and their influence in the media will stay roughly the same. Warren Kinsella points to studies which suggest that the rate of growth of the blogosphere is waning, but Robert at MyBlahg points out that with campaign donation laws and the rapid pace of our recent elections weighing heavily on all the parties’ coffers, these parties may become more dependent on various freebies, like blogs. They’re both right, but that’s only because the blogosphere’s influence on the mainstream media has been greatly misunderstood by the mainstream media and in the blinkered worldview of the more egotistical bloggers. There is nothing magical about blogging. A blog is nothing more than an accelerated website with a community attachment. Its influence is no more or no less than that of any other advertising medium. The well designed, well written sites that have something interesting to offer will get the hits and the attention. The poorly designed, poorly written sites won’t, and those with some capital to back them up will have an advantage. That’s the way it’s always been and that’s the way it’s always going to be.

Correct, I think. Though an easy prediction to make.

6) The Saskatchewan Party will finally win in Saskatchewan (it would be rather embarrassing if they could only win in Alberta), for no other reason than it’s time for change.

And correct too. Really, the last NDP victory in Saskatchewan surprised me, and I frankly think that the New Democrats needed this defeat as much as the voters of Saskatchewan did. For a democracy to be seen to function, the government has to change occasionally (James looks pointedly at Alberta), and now the NDP finally have a chance to get hungry once again.

7) The Canadian political blogosphere will have its first sex scandal. You’re left to your own devices to imagine what form it will take.

Wrong. But I think I’ll save this one for next year.

8) Andrew Coyne will disappear from the blogosphere for another six months.

No points for this one. But let’s cut the man some slack. He has a life. And when he does write, he provides some of the most insightful commentary on the blogosphere, even if I disagree with almost half of everything he says.

9) The best shows on television will continue to be Battlestar Galactica and Doctor Who, with House cutting them both close.

Correct as well, in my opinion, although Battlestar Galactica slipped a little bit in my opinion. House also weakened as it neared the end of its third season, but it was back in top form for its fourth. Doctor Who continues to chug along.

This group has been joined by the wonderfully quirky show Pushing Daisies, though I feel a little sad watching it, wishing that Wonderfalls was still alive.

And no points here. Wash, rinse, repeat for 2008. Until then, fare thee all well!

And here are a selection of provocative posts written last year on this blog: