Things continue to be busy here, but I’m pleased at the progress. The Dream King’s Daughter is now over 18,500 words, and new ideas are morphing into new scenes set in the middle part of the book.

The whole thing is still a mess, kind of like bread dough that’s being kneaded, with flour spurting out all over the place. I have only the vaguest idea of what the loaf will look like at the end, and it might turn out that I’m making cinnamon rolls, but I’m having the time of my life.

Vivian also had a good day today, participating in Early Years, and enjoying herself while daddy did the laundry that came knocking at the door. Actually, we’ve made a lot of progress in cleaning up the house since we arrived home from our vacation. And maybe it’s this combined with the slowly returning light, but so far it all feels good. Fingers crossed that this will continue.

I’d also like to mention that first round voting is now open at the Canadian Blog Awards. There have been some changes this year: you only have one vote per connection per category. You will NOT be allowed to vote once per day, so make your choices carefully and go vote. I’m up for Best Non-Partisan Blog, Best Blog Post Series (twice) and Best Blogosphere Citizen (thanks Jason, I was touched). The first round to whittle down the myriad nominees to a short list of five continues until January 21, and the second round should begin on January 23. I’ll post a review of the short list nominees at that time.

And while I’m at it, you should all check out a parallel set of blog awards being set up to honour Canada’s feminist bloggers. They are currently accepting nominations, so go show your support and nominate people.

And now on with the review. 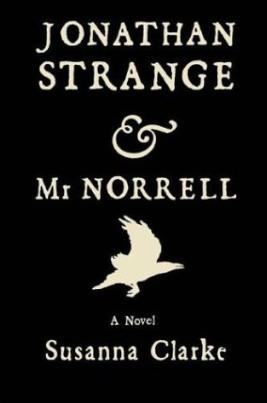 It is the beginning of the 19th century. England is beleaguered, harried in Europe by Napoleon, governed by a complacent parliament and by a poor, mad king. And no greater indication of the country’s decay is the state of magic in the country. Centuries ago, the magicians of England forged relations with the kingdom’s of Faerie, and English magic was the envy of the world. Today, England’s magicians barely deserve the term, unable to practice the art, and confined to the task of researching the lives of their forebears, locking the scraps of their knowledge into dry, dusty books.

But wait: word comes out of York of a reclusive man named Mr. Norrell. Word is that he isn’t a theoretical magician. He can actually practice it. And after he proves his skill, the shy, reclusive man fights against his own anti-social tendencies to travel to London, to show parliament and the Lords that magic can be useful for the kingdom again. Gradually, interest picks up. Norrell’s magic finds a home in the Admiralty as a weapon in their war against Napoleon. Norrell’s fame grows (much to his dismay), but he seems to have everything he wants. He is the sole guardian of English magic in the kingdom. He has restored it to a respected place in society, and he holds the keys… until a surprising challenger to his role appears in the form of the young, flamboyant and incredibly talented Jonathan Strange, who shows up to be his pupil.

A good word to describe my initial impressions of Jonathan Strange and Mr. Norrell, by Susannah Clarke, would be “daunting”. This masterwork of historical fantasy, released in 2004, is a thick tome (if you can, get the boxed three-volume version as the single-volume version hurts one’s hands to hold it for long periods), and it is written in the deliberately dense prose of the period. With footnotes. The story takes a while to get rolling, and by page 100 you are left to wonder how this can be a fantasy story when there is so little magic in it. We don’t even meet Jonathan Strange until we’re almost a third of the way into the book. But give it time. Give it time.

The slow start is all part of the book’s genius. The prose is in period, and the story that Clarke weaves is complicated and highly detailed. She takes the time to establish loads of secondary characters, most of whom do pop up throughout the book to play critical roles in the plot’s progression. Those of you who can slog through the first fifty pages will be rewarded by a fascinating alternate history of the revival of English magic during the Napoleonic Wars, the contribution magic made to Lord Wellington’s victories, and the bizarre relationship between Jonathan Strange and Gilbert Norrell. The two men are the odd-couple of magic. Norrell is reclusive and misanthropic, whereas Strange is outgoing. Norrell is a book fiend who jealously guards his secrets, whereas Strange has a natural talent. Norrell wants to keep English magic in a small box, while Strange wants to revel in its rediscovery. And yet the two initially become fast friends — as the only two practicing magicians of the age, with Norrell as dependent on Strange as Strange is to Norrell: master and student.

And for all the parlour room intrigues of Mr. Norrell and Jonathan Strange’s surroundings, there are moments of genuine horror as well, especially when Strange goes to Portugal to join Wellington in his campaigns, and encounters the unfortunate consequences of some of his spells. Strange’s willingness to barrel into the wonders of his newfound magical abilities is contagious, but in many respects we see the reasons behind Mr. Norrell’s frantic caution in reopening the roads between England and Faerie.

I am halfway through the book, but one can already see the great schism coming. And though Norrell is something of a loathesome miser, and Strange is impossible not to like, it is a testament to Clarke’s skill that I dread how the break-up is going to affect Norrell. Then there is the deepening mystery of the representative of the kingdoms of Faerie, whom Norrell was forced to deal with to raise a young woman from the dead. His interferences in the lives of innocents — all the more terrible because he intends them as gifts — are riveting to read, as is the anticipation of his coming conflict with Strange and Norrell.

Jonathan Strange and Mr. Norrell is a fascinating read precisely because of its daunting thickness, because Clarke has taken the time to fully accessorize her story with a detailed history of the fall of English magic, to carefully insert its resurgence with a critical period in real English history, to carefully insert new characters with historic personages and ensure that the reader hardly tells the two apart. To bring us into the lives of the people of the time, make them real, and make us care for them. To make all of their actions make sense. It is a rich and varied meal. Yes, this is a book that requires a lot of investment on the part of the reader, but it is an investment that pays off.