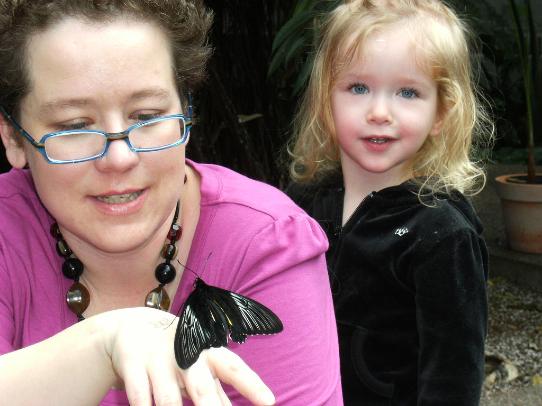 A couple of days ago, I heard a reporter on CBC News mention that southern Ontario had hardly seen the sun at all, so far in 2008. That explained a few things. It has been a dreary, grey winter — the worst sort. Yes, we don’t get the bitter temperatures that, say, Saskatchewan gets, but neither do we get their sunlight. I’d rather have the sun melt our snow into mucky puddles rather than dreary rain, and I’m not alone. It seems that, all around us, everybody is coming down with a bad case of the SADS. Yesterday and today were cold. Bitterly cold. And sunny. Just the sort of weather that the prairies are known for. And it was almost as good as coming out of a deep freeze into spring. And Erin and I took advantage of this respite by going on a long country drive. We also stopped at the Wings of Paradise Butterfly Conservatory on Kossuth Road in Cambridge. Some of you may remember our first visit to this attraction, where the picture on the right was taken.

Back in Toronto, my father would often beat the winter blahs by going to Allan Gardens and just breathing in the heat and humidity that the greenhouse had to offer. But I think the butterfly conservatory ranks higher. You still have the same, almost tropical interior conditions — a shock when there is white on the ground and the sky glows with cold — and beautiful fluttering things greeting you as you step through the doors.

Of course, as I recall, Allan Gardens was free, whereas Erin, Vivian and I had to pay $20 to have our hands stamped, but we were still glad we came.

We then did our usual writing drive where Vivian slept and Erin worked away at her laptop while I went looking for a Chapters that would occupy Vivian before the trip back. Together, we managed to pull off about 2,000 words. The Dream King’s Daughter is nearing 20,000 words, and Erin’s Plain Kate is almost through its revisions. All in all, we were feeling pretty good. Probably the best we’ve felt since 2008 began.

It’s a little hard to consider that winter still has two more months, if not more, to beat us around. Here’s hoping for more prairie weather. The January thaw is nice in theory, but I’d rather have the sun.

Some Doctor Who Season 4 Thoughts

There are some spoilers here, so turn away if you don’t want to know.

Most of those who watch Doctor Who know that Catherine Tate’s Donna is returning to act as the primary companion for the season, and while the reaction in fan quarters seems to be mixed, I myself am looking forward to it. Why? Because Catherine Tate is older than David Tennant. More than that, if The Runaway Bride is any indication, the dynamic between Donna and the Doctor will be entirely different from that of the Doctor and Rose or the Doctor and Martha. Rather than having a lovelorn figure swept away by the Doctor’s sex appeal, Donna could very well act as the Doctor’s big sister, ready if not eager to give the man a smackdown whenever he needs it.

That’s good news, in my opinion. But then I had another thought: it has just been revealed that John Barrowman will be returning for at least a couple of episodes as the seductive Captain Jack Harkness. And now I’m having images of Donna responding to Jack flirtations with a decided anti-flirt. The delightful possibilities just grow in my mind. Dare I hope that Captain Jack won’t know what hit him? At least, initially?