I am an Obama Man 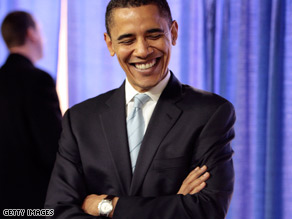 I realize that yesterday was Super Tuesday and all, but I was still struck by a few blog posts, from the Liberal Canadian blogosphere about Barack Obama’s candidacy to become president of the United States.

I guess it’s no surprise that Canadians would take an interest in the Democratic and Republican primaries — it pays to pay attention to the process that will determine who will be the leader of our neighbour and one of the most important nations in the world. I guess its also no surprise that the Liberals would favour Democrats in general, and Hillary Clinton in particular, as her candidacy recalls a better time when relations between Canada and the United States were warm, and America wasn’t governed by George W. Bush.

But I am still surprised to see the level of antipathy that has developed towards Hillary Clinton’s main rival, Barack Obama. I mean, if these Liberals were favouring Democrats, one would expect a little less of the partisan swipes against a fellow Democrat than one would of, say, the Republican candidates for the presidency. But I guess that, long ago, these individuals wrote themselves a comforting little story about how the 2008 presidential election would go. They imagined, I wager, that Hillary Clinton would restore a country that had been so maligned by Bush, returning the oval office to the ‘good guys’ in name as well as in fact. But Hillary’s coronation has not gone as smoothly as these people had hoped. And they look with hostility on Barack Obama, who dares to threaten their fairytale.

But here’s the problem: how do you tear down this individual? Well, politics offers no shortage of ways of denouncing one’s opponent. The problem is that most of the epithets thrown at Obama apply to Hillary as well. People tend to focus on Obama’s so-called lack of experience, conveniently forgetting that Hillary is the junior senator of New York.

And Obama has plenty of experience. The reason why it’s often ignored is that most of it has come from the Illinois state senate rather than at the national theatre, and the American media tend to frame the story of the New Guy versus the Old Hand, and mentioning Obama’s eight years as an Illinois state senator undercuts the story the media wants to tell.

As a state senator in Illinois, Obama was no stranger to controversy and hard work. Indeed, among his greater achievements was bringing forward legislation requiring police to videotape interrogations in murder cases. From the get-go he was accused of being soft on crime. The police lobby vilified him, and the governor opposed his measure. State Republicans (who controlled the senate) had little reason to support him. But the measure passed the Illinois state senate. Unanimously.

How did that happen? Apparently, he listened to opponents suggestions and incorporated ideas that worked. Behind the scenes, and in front of the scenes, he debated and cajoled, and built support for the bill. When the police lobby spoke out against his legislation, he engaged in vigorous negotiations and ultimately placated the lobby by supporting some of their favoured initiatives. Eventually the governor who had promised to veto the bill accepted it, and the measure has since been adopted in other states.

Those who are speaking out against Obama now are, in my opinion, influenced by the fact that they had settled upon Hillary Clinton as the preferred Democratic nominee and they are galled by the fact that Obama has held out this long and even holds strong possibilities of winning. Jason Cherniak gives voice to this, saying: “Who is Barack Obama? What has he done with his life? Why does anybody think that he is qualified to hold the most powerful elected position in the world?”

Who is Barack Obama? Well, I’ll tell you who: he is a politician, just like Hillary. He has served his constituents for years, just like Hillary. And he has just as many qualifications to hold the most powerful elected position in the world as Hillary does. He certainly has more qualifications than George W. Bush had.Indeed, Obama has more experience than several other fine presidents and prime ministers we can mention, including Pierre Elliot Trudeau. But better than experience is instincts. Trudeau’s political instincts made him into a powerful prime minister even just after two years, five months of being elected to office. Obama’s experience in the Illinois state senate shows that he has the instincts necessary to be a good president.

And more importantly, Obama offers something different. He speaks beyond partisanship. He talks about bridging the gap between the two Americas that are forming down south. He speaks about hope trumping partisan politics. And, whether Hillary likes to admit it or not, old style partisan politics are what she represents. As fine a candidate as she is, she cannot be what America needs her to be: a healer, someone who could heal the partisan divides that rend that nation.

Obama is raising turnout among a younger generation of voters. He is attracting the attention of independents and even liberal Republicans. By comparison Hillary, with her divisive personality, will also raise turnout: Republican turnout. From where I’m standing, if Hillary Clinton takes the Democratic nomination, then the next president of the United States will be John McCain (possibly with Mike Huckabee as VP — how’s that for scary?)

I’m not ashamed to admit that I hope Barack Obama wins the Democratic nomination and ultimately becomes president (possibly with Bill Richardson as VP). And I’m not alone, either. That’s the way Erin’s voting, and she can actually vote in these primaries. That’s the way that my mother-in-law voted in Iowa. Obama represents change, a different way of politicking that’s ironically quite old, but which is sorely lacking in this day and age. And consider this: if Clinton wins, then in 2012 it will have been 24 years since America was governed by a president whose last name wasn’t Clinton or Bush. And don’t forget that after Hillary, Jeb Bush is quite healthy and even more capable of handling the presidency than his brother George.

I thought that Americans overthrew their kings. Since when did presidencies become dynasties?