Walk with me for a second. Follow my reaction to this developing story as told by the CBC: 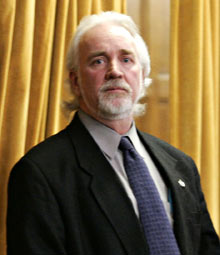 The late Independent MP from British Columbia who kept the Liberals in power in the spring of 2005 was offered a $1 million life insurance policy by the Conservatives in an attempt to win his vote, according to an upcoming book.

Chuck Cadman, who was battling cancer and died in July 2005, sided with the minority Liberals in the crucial vote on May 19, 2005, ensuring Canadians would not have to head to the polls for a summer election.

Two days before the vote, Zytaruk writes, Cadman was visited by two Conservative party representatives — who are not identified — and presented with a list of enticements to rejoin the party before the vote.

"That was on him, so that if he died I'd get the million dollars," Cadman's wife, Dona, is quoted as saying. "There was a few other things thrown in there too."

Dona Cadman said her husband was offended by the offers, the book says.

I remember the time well. The minority Liberal government of Paul Martin had gotten itself into a pickle. The poll numbers were iffy and it was a finely balanced house. The Bloc Quebecois and the Conservatives were ready to bring everything down. The NDP had lent their support to the Liberals in exchange for increases in health and infrastructure funding. The balance of power was shared by three independent MPs: mouth-footed former Liberal Carolyn Parish who would vote with the government, embittered former Liberal David Kilgour, who would vote against the government, and Chuck Cadman.

Chuck was a former Conservative and Reform Party member, but he had won his seat in 2004 as an independent after he was pushed out of his party by Stephen Harper. He was a firm believer in serving his constituents, and had polled them to ask them what to do in this critical vote. He was also suffering from terminal cancer and undergoing chemotherapy, but he made sure he was in Ottawa for the vote. He stayed mum as to his intentions, making him possibly the most heavily covered independent MP in the history of Canada.

When the critical budget vote took place, the roll call of Yeas swept through the Liberal and NDP benches, swept Carolyn Parish to her feet, and then the camera was there to catch her delighted gasp. The entire parliament gasped. Chuck Cadman, looking a little bit smug and a little bit shy, had voted with the government.

It was quite a powerful image of what one man could do, and it was quite a way for Cadman to cap off his career. Less than two months later, he died from his cancer.

It's also worth noting that the Liberals were on the ropes because of AdScam, because of the public perception that the party was corrupt to the point of receiving large sums of cash in envelopes. The Conservatives were eager to run an election focusing on ethics and cleaning up Ottawa. So eager, apparently, that they were willing to offer $1 million to Chuck Cadman's family to try and buy his vote.

Chuck seems like a man who hated such hypocrisy. If he had a fit, I could see why.

Still with me? Now check out this quote from the Globe:

Dona Cadman, who is now running for the Conservatives in the Vancouver-area riding of Surrey North, was not in the office at the time. But she says her husband was furious when he returned to their apartment. "Chuck was really insulted," she said in a telephone interview with The Globe yesterday. "He was quite mad about it, thinking they could bribe him with that."

Wait a minute, what did that say?

Dona Cadman, who is now running for the Conservatives

Chuck Cadman honoured his position as member of parliament. He worked hard for his constituents and he held himself at a high moral standard. If nothing else, this story proves that yet again.

But his memory comes across as somewhat tarnished by this controversy. Think for a moment what it illustrates: the Conservatives, desperate to show off the tainted Liberal record as much as possible and offer Canadians a clean alternative were engaging in a serious act of corruption from the get-go. Most sources seem to indicate that this meeting really did happen, and Prime Minister Stephen Harper knew about it. Which calls into question the integrity of the Conservative's clean-government platform, which is the main reason why the Conservative government is power at the moment.

But here we have Mrs. Chuck Cadman running for the party that had cast off her husband, and then showed their true colours in trying to buy him back. There's been no change in leadership in the Conservative party. There's no sign that the Conservative party officials who made this offer have been fired and that the current Conservative leadership wouldn't make such a corrupt offer again if the need presented itself. And she calls the move for what it is: a bribe.

For the most part, reading this transcript, Dona Cadman seems like a decent woman, but her decision to run for a party that has done this really makes me question her judgement. I'll credit her for her candid comments in this interview, but you can sense how uncomfortable she is finding it navigating these waters of hypocrisy:

Reporter: "Can I also ask you, you're running for the Tories now, does this put you in an awkward situation in terms of the party and the allegation?"

Reporter: "Have you spoken with the Prime Minister?"

Cadman: "I spoke with his office today"

Reporter: "And, what was said, if you don't mind me asking?"

Cadman: "Umm... just that they were going to release a press release."

Reporter: "Do you denouce what was offered to your husband, you said earlier you understood?"

Reporter: "How angry does it make you, or does it?"

Cadman: "Not as much as it did before"

Reporter: "Why is that?"

Reporter: "Would you consider it a bribe then?"

Reporter: "How much regret to have telling this story, now that you are running for the Tories?"

But the core of this interview comes in this exchange:

Reporter: "Okay, can I ask you, because it's going to be in this book that is coming up. Can I ask you what you husband told you before that critical vote?"

Cadman: "Just that two gentlemen have visited him, offered him a 1 million dollar life insurance policy and a few other things.

Reporter: "A few other things?"

Cadman: "Well, one was being welcomed back into the Conservative Party"

Reporter: "Were you surprised by that story?"

Cadman: "No, not really. It was something that any party would have done.

It was something that any party would have done.

Canadians, we have been sold a bill of goods. The Conservative Party campaigned on cleaning up Ottawa, but has failed to do so. Harper shot down his promised public appointments commission because the opposition in this minority parliament refused to accept his sole selection for the committee's chair. He has not lifted a finger to reestablish this commission and has been handing out appointments to federal jobs like a Liberal. He rushed patronage appointments over the Christmas 2006 holidays just days before his promised Public Accountability Act took effect. And now we hear allegations that, six months before the 2006 election was called, Conservatives were willing to bribe MPs for their votes.

Can we have that election now, please?