The Death of the Suburban Dream? 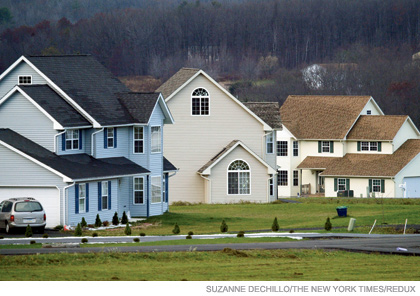 One of the best courses I took back in my university days didn't tell me what it was really about until about halfway through. It was informally referred to as third year statistics, but to put it mildly, its mix of material was eclectic.

On one week, we would watch Michael Moore's Roger and Me, which despite its political axe to grind, is useful in urban planning circles for effectively depicting the social and economic collapse of Flint as a result of a single disastrous event (the series of GM plant closings). The next week, we were given a lengthy lecture on the creation of London's sewer system. The week after that, we talked about the information economy, and the impacts of telecommuting or even cocooning (where we gain the ability to do all our work and shopping at home and never brave the outside world).

The professor was feeding us breadcrumbs, and waiting for the disparate pieces of information to come together and click. And, for me, they did.

Roger and Me shows how interconnected the relationships within a city are, so that major technological or economic changes can ripple through the local economy, significantly changing the way business is done, or even if business is done. As a result communities can (and have) boomed and busted overnight.

The description of the early days of the London sewer system brought home to us the realization that modern planning -- indeed, every major characteristic of cities today -- is the response planners and engineers came up with to answer particular questions that manifested themselves with the onset of the Industrial Revolution. To wit: how do you house a large number of people who all work in a dense concentration of jobs? (Putting houses next to factories? Not good. Thus rudimentary zoning laws were born). How do we bring them from their homes to their work? (Public transit isn't a factor until the mid 1800s) How do we bring them clean water and evacuate their waste?

Planners and engineers were able to alter their responses slightly as technology changed, but the central question that built modern cities remained: how do we house people and get them from their homes to their work? As our centre cities choked on their own pollution, it became desirable to live at the edge of cities. As long as the average individual could not own an automobile, our cities grew out in “fingers” of development with houses no more than a ten minute walk from a streetcar line. When the automobile became affordable to most people, those fingers filled in as urban sprawl took hold. Even when the factories gave way to office towers, the limited land in our downtowns forced people to live as far as possible at the edge of cities, where housing was affordable, albeit still tied to their place of employment by a strip of asphalt.

And with the onset of the Information Revolution, here's where things get a little bit scary: now that the Industrial Revolution is effectively over, the relationship between our home and our work is about to change.

Back in the early 1990s, my first experience with Internet flame wars came from the newsgroups misc.transport.urban and alt.planning.urban, where advocates for the suburban way of life derided any suggestion that their lifestyle was on the wane. A couple of particularly Ann-Randy posters even went so far as to argue that it was our national duty to purchase a car and drive it. Anything less and we were leeches on the economy. In these people's opinion, suburban living was the most popular mode of living in North America, and planners that did not get out of their way of the trends and conform all development and redevelopment along suburban principles were fundamentally undemocratic (or, as they tended to phrase it, “a bunch of communists”).

What these suburban activists refused to acknowledge was that suburban living wasn't the most popular form of living. Neither, actually, was living in the centres of large cities. Suburban living with large lots and extensive subdivisions where one had no choice but to take a car, burning a litre of gas to buy a litre of milk, ranked third. Centre city living ranked second. The most popular choice, by at least a third of all represented? Small town living. And that's not too hard to understand why. Where else can you get the convenience of living close to good schools and stores, as is the case of centre city living, and yet have a perception of safety? Small towns. So why weren't more people living in small towns? Because there weren't any jobs in most small towns. The suburbs (especially those suburbs consisting of old small towns swallowed up by urban sprawl) were the only feasible compromise.

The two questions that have defined the economic development of our cities and suburbs are “where do you live” and “where do you work”. As long as one is within two hours (or sometimes three) of the other, then the economic relationship is possible. But now we don't need to work with our hands. Now we are working with our minds. For many of our jobs, there is no longer a requirement for us to actually show up to work. Thanks to e-mail, high speed Internet, work websites and more, people can choose to live wherever they want. And thus the other desires come to the fore: to live in a place where one doesn't need a car to take one's kids to school, where entertainment is close at hand. Suburbs don't have that. Centre cities and small towns do.

Couple this with the unsustainability of suburban living, which was largely subsidized by such economic factors as cheap oil (now disappearing) and special taxes like development charges that pay for the construction of subdivision infrastructure, but not its eventual replacement, and it was only a matter of time before the suburb failed. The advocates laughed, even as commutes lengthened from half hour jaunts to two-hour ordeals. Even as we could see the intolerable hidden cost on the lives of families living in the suburbs. Even as people started moving back to centre cities in the early-to-mid 1990s. Even as Toronto's pattern of urban blight threw off the American standard and affected the inner suburbs, rather than the downtown core.

At first it was an oddity, and then it became a trend. When the hip suburban malls of the fifties and the sixties started to go under thanks to the onslaught of power centres (creating a new urban planning term of “greyfield”), we could see that the benefits of suburban living were fleeting and largely illusionary. And slowly the evidence mounted that this was the case. And now it's hit America.

At Windy Ridge, a recently built starter-home development seven miles northwest of Charlotte, North Carolina, 81 of the community's 132 small, vinyl-sided houses were in foreclosure as of late last year. Vandals have kicked in doors and stripped the copper wire from vacant houses; drug users and homeless people have furtively moved in. In December, after a stray bullet blasted through her son's bedroom and into her own, Laurie Talbot, who'd moved to Windy Ridge from New York in 2005, told The Charlotte Observer, “I thought I'd bought a home in Pleasantville. I never imagined in my wildest dreams that stuff like this would happen.”

[T]he (sub-prime mortgage) crisis has indeed catalyzed or intensified social problems in many communities. But the story of vacant suburban homes and declining suburban neighborhoods did not begin with the crisis, and will not end with it. A structural change is under way in the housing market--a major shift in the way many Americans want to live and work

They said it couldn't be done. But it's happening. The only problem is, we now have six decades worth of subdivisions which are unserviceable, unwalkable, and magnets for all of the nastiness of urban decay. What do we do about them?

Market forces will convert older suburbs close to the inner cities, or those with easy access to public transit infrastructure, into desirable places to live. Have a look at what's happening in Port Credit or in Streetsville within the City of Mississauga; these old villages already function quite well on urban principles within Mississauga's suburban sprawl.

But what about the remaining housefields? I don't think we can afford to leave vast stretches of suburban territory to become the dumping ground for our poor. We should not return to the old shanty towns that used to ring our cities in olden times, and we certainly shouldn't place the additional burden of super-lengthy commutes to get the impoverished to their jobs. You already see this situation in Omaha, Nebraska, where the city's grotesque urban sprawl has forced some people to choose between a decent place to live, and a decent place to work. The city's woefully inadequate public transit network is actually keeping people unemployed by keeping them from their jobs.

The cost of transforming sixty years of mistaken development will be massive, but perhaps we could roll some of that in with the $123 billion we now must spend in order to restore our aging infrastructure and prevent bridges from falling down.