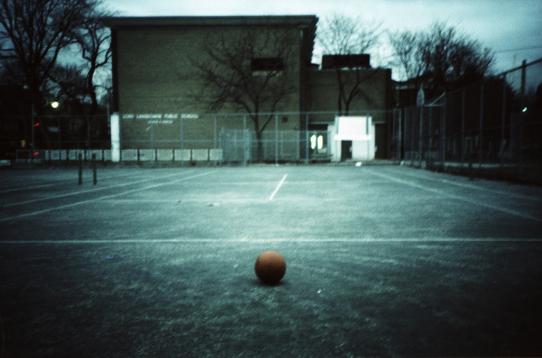 No April Fools jokes today. I was able to put together a few good ones for Transit Toronto, but nothing came together this year. There were some excellent jokes out in the blogosphere, though, so perhaps it wasn’t my year to compete against all that chatter.

So instead, I thought I’d challenge myself to write up something embarrassing. It’s a good exercise, actually: to write up something that you’re reluctant to share — within reason, of course. Good writing doesn’t flow from the pen at the best of times, and sometimes adding even more weight to your arm helps you build those muscles to get those words out. I think you all should try it, and I’d like to challenge some of you in this fashion.

So, what’s embarrassing to me? Where do I begin? Well, how about memories of being a teenager in love? I’m sure a lot of us can relate. And I have to admit that young and unrequited love has made me stupid in the past.

I have always been a geek. I have always loved trains and I was always something of a brain at school. And that did make me a target for teasing, if not outright bullying. I think I wasn’t seriously bullied for a number of reasons, chief among them being: 1) luck at going to two (out of three) inner-city Toronto schools that valued excellence in education, so brains were only mildly teased and not seriously looked down upon, 2) attending classes at schools with a very diverse population with no real “in” crowd to speak of and 3) a sense of self-preservation and skills to sell which allowed me to buy some protection by offering up my skills to help would-be bullies and teasers with their homework.

So, I while I wasn’t an outcast at school, I certainly wasn’t in the “in” crowd. And while I wasn’t a loner and unafraid to show my strengths, my confidence dropped rapidly when subjects other than schoolwork became involved. Grades seven and eight were the least favourite of my school career, and I don’t entirely blame it on the fact that we at Orde Street Public had to move to a new school in Lord Lansdowne (Orde only went up to grade six, and we had to trek several blocks west to attend classes in grades seven and eight). Yes, maybe the kids were a bit meaner, but I was still able to make friends. I just think that so many changes start to happen to us at grades seven and eight, and the schools largely can only stand back and let us find out for ourselves.

Grades seven and eight were the first time that my fellow students were introduced to the concept of a school dance. At Lord Lansdowne, these were free and tended to take place on a Friday afternoon before some major seasonal event, like Halloween or the Christmas break. Attendance was also mandatory, if you could believe it. You see, they used to be held on evenings and offered a small cover charge, and NO ONE attended. Even at their new time, the arrangement was to split the gymnasium in half, with the side with the music darkened up, and the other side reserved for games. Grade seven students, by and large, played the games, staying well away from the mysteries of the darkened gym. And in the darkened gym? Most of us grade eighters had no problems bopping about to the fast songs, but the floor cleared out for the slow songs, leaving it to the dedicated few who would attempt the “tummy-rubbers”. You know the ones, where a boy and a girl would brave the gasps of shocked onlookers to clasp one another close and circle slowly in time to… whatever?

But I’ve got to tell you, I think many a boy pressed up with their backs against the walls secretly wanted to be on the floor doing the clasping of this suddenly new, entirely alien and strangely alluring species called “girl”. Gradually, as the weeks pressed on, some of us (myself included) got braver and asked some of the girls on the other side of the dance floor to dance. And they agreed!

In grade eight, I developed a serious crush on an oriental girl in my class named Lucy (last name not included to protect the innocent). And I know she knew because an idiot friend of mine blabbed, but I myself didn’t act on my feelings to, you know, ask her. Mostly because she told me in no uncertain terms that she was not interested in a nerd like me.

So it came to pass that I knew where Lucy lived. I don’t remember how I learned about the address, but I don’t think it required doing anything illegal or, even, difficult. And I would take every opportunity, when passing near the neighbourhood, to walk up her street and pass her house on the hope of bumping into her. Little stalker me. Not entirely sure what I would do if that actually happened, because it never did.

This was also a time when I was active on my bicycle in Toronto. My father had exhumed his old coaster from somewhere (no gears, but otherwise perfect on the flat terrain of Toronto south of Davenport), and it was the right size for my legs and it represented freedom without a TTC token. My parents fitted it up with a book basket and all of the safety accoutrements they could pull together, and were entirely happy to have me roaming their downtown neighbourhood, as long as I stuck within their clearly defined boundaries, and was back home before sundown.

So, I paid a visit to Lucy’s street, coasting down the pavement, doing perhaps 20 kph according to my nifty spedometer, casting my eye on the Victorian townhouses in the hopes of seeing her there.

Not for one second noticing the dump truck that was parked in my path.

I got home about a half hour later, blamed the bent mud guards and broken mirrors and scraped elbows and knees on a pothole, I think. My parents seemed to accept that explanation. And eventually gave up cycling.

But I can claim one moral victory here. On the last dance, on the second last day of school, on the second last slow dance of the afternoon, knowing that we were heading off to different schools, I plucked up enough courage to ask Lucy to dance. She scowled at me. But she marched onto the dance floor, turned around, and held out her arms. And we danced.

And some of my friends actually cheered.

Only saw her a couple of times afterward, and worked through a couple of other crushes through high school — fortunately none of them involving serious embarrassment or injury. Never did really master the art of asking people out until late in my university career. Something for which I think Erin is grateful. And, given how it all turned out, so am I.

So, what is your most embarrassing moment that you’re willing to share? Don’t make me tag you? All right, I will:

As an aside, the picture at the top of this post is entitled Abandoned and is by Stefan Powell. It is used in accordance with his Creative Commons license.

By an amazing coincidence, I was looking for pictures of Lord Lansdowne Public School, but couldn’t find anything. But then I do a search through Flickr’s Creative Commons pool for “Toronto Schools”, and this is one of the first pictures I found, and it is of Lord Lansdowne Public School, the southwest corner, looking north from the tennis courts.

I played in those tennis courts. But that’s another embarrassing story that I think I shall save for later.