If I Were Hillary Clinton... 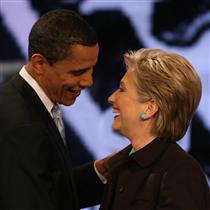 But, seriously, folks, I’m not too worried that she’s deciding to stick out the fight, and I think I’ll be feeling that way for at least another month.

If I were Hillary Clinton, now, and if I could afford it, I’d stay in the fight for the remainder of the primary season, but I’d rejig my campaign to focus solely on taking down John McCain. This would be a gift to the Democratic Party, giving them a 2-for-1 deal while the primary season closes. Then, when the results from Puerto Rico comes in, I’d bow out gracefully and endorse Obama, preferably as part of a surprise appearance at one of his rallies (that would be sure to stop everything on CNN).

The big advantage of this approach is that it helps to energize the remaining states in the campaign, including little, forgotten Puerto Rico. I mean, as worrying as it is to Democrats seeing John McCain off to one side, twiddling his thumbs, the fact remains that the party is seeing record turnouts at these events. In Pennsylvania alone, over 300,000 new voters signed up to join the Democratic Party. That’s stuff you can take with you to November, regardless of who the nominee is.

The states that are coming into play, now, including South Dakota and Montana, have almost never had a primary election that counted for anything, and I suspect that many of their voters are salivating at a chance to cast a ballot that counts for something this time around. It would be a shame to lose that through Clinton’s early departure from the race.