Toronto: Whose Fault is it?
Part VI (Conclusion): Bill Davis 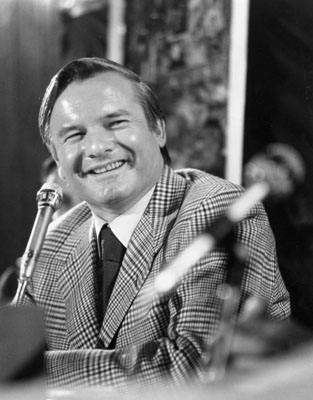 When we’re trying to assign blame for Toronto’s problems, it’s worth stepping back and asking, what are we complaining about? And many outsiders may look at Toronto and wonder precisely that. What’s our beef?

Yes, we can worry about crime. Even discounting the media’s propensity to focus on bad news, any crime is one crime too many, but Toronto is still substantially safer than many other Canadian cities. It’s certainly safer than most American centres of comparable size. What about poverty? Well Toronto hasn’t seen the sort of ghettos that have afflicted American centres. Our downtown core remains vibrant, and urban decay has been confined to a ring of inner suburbs, saving us from bad press, and keeping the flow of international investment open.

Transit? Well, Torontonians need only to step outside their city to see how spoiled they are when it comes to service. Despite underfunding and overcrowding it is possible — comfortable, even — to live in Toronto (and parts of Mississauga and York Region) and not own a car. It’s harder to say that about Ottawa. The Region of Waterloo where I now live is certainly struggling to make the car a luxury rather than a necessity. The TTC is still something other transit agencies aspire to be. And despite the funding shortfalls, things like Toronto’s public library system and many of its schools remain an envy of other North American cities.

But the TTC is expected to break its 1988 ridership record of carrying 463 million passengers, and doing so with 300 fewer surface vehicles. Crime remains higher than it should be. The neighbourhoods that are now struggling were prosperous working class areas just twenty years ago. We were engaged in constructing new subway lines continuously from 1959 to 1980, and after twenty years of little construction, are only now trying to kickstart a decent LRT network.

There is a definite sense in this city that, though things aren’t totally bad, they’re certainly not as good as they used to be, and the disappointment and concern felt is akin to that felt by the parents of a child who comes home with a report card bearing the phrase “he can do the work”. Crime? Decent transit? Vibrant neighbourhoods? A non-dysfunctional council? We used to do better than we are now, so why aren’t we? Whose responsible? And the search for answers should step further back in history and ask another question: how did we do as well as we did? And what is preventing us now from doing as well as we did?

The search takes me to a little known decision made by none other than Ontario premier Bill Davis.

Bill Davis did a lot of good for the City of Toronto, including halting the ill-advised Spadina Expressway and launching a twenty-year commitment to the growth of public transit in the city, but he ultimately made a decision that I think spelt the death of Metropolitan Toronto.

It was Mike Harris who killed Metropolitan Toronto, but though his decision was grossly unpopular with city residents, I don’t fault him for it. The megacity was, in my opinion, better than the six separated cities and mass of special purpose bodies that he’d mused about early in the 1995 campaign. And while the single amalgamated city has its problems, I think that by that time the Metropolitan level of Toronto’s government had lost its relevance.

You have to remember what two-tier municipal government is for. The upper-tier of government is supposed to be a boxing ring in which representatives of the lower-tier municipalities discuss issues that are common to the urban region. When it was set up in 1954, Metropolitan Toronto allowed the member municipalities to work together to manage the development of the region, while maintaining their independence. The outer cities were able to use the borrowing power of the central cities to build the infrastructure to service the newly developing neighbourhoods, and the center city was able to use the economic boost of those areas to renew central city infrastructure.

(As an aside, I’m aware that this arrangement wasn’t sustainable over the long term and provincial governments really need to give municipalities a source of revenue other than development charges so that they stop fostering urban sprawl. Something like a portion of the sales tax would be a good idea.)

The key to the success of this arrangement, however, is that the upper-tier level of government was the regional government: that it contained all of the various voices that made up the urban region it administered. And by 1995, this was no longer the case. Half of the population of the Greater Toronto Area now resided outside of Metropolitan Toronto.

The fault for this rests with Bill Davis and his contemporaries. Starting the late 1960s, the provincial government at Queen’s Park was aware that Toronto-centric development was spilling outside the boundaries of Metropolitan Toronto. They knew that this development would put pressure on provincial highways like the QEW and the 401. Among the farsighted responses to this was the creation of GO Transit, which has relieved the pressure on the area’s provincial highways ever since and has saved taxpayers money in terms of highway maintenance and construction.

But rather than expand Metropolitan Toronto’s boundaries to encompass the new developments in Port Credit, Markham and Pickering, the province decided to create a series of mini-Metros surrounding Toronto. While this wasn’t the best decision, in my opinion, they then tried to take control of the regional planning process. While the mini-Metros of Peel, Durham, Halton and York were now lean-mean-borrowing machines, they were supposed to build according to a provincially established regional plan that would balance transportation and sewer/water infrastructure. Bill Davis then thwarted that balance when he allowed the construction of Highway 410 to his Brampton home. The skewed development that bloated Mississauga and Brampton in the years since and now chokes them with traffic and increasing property taxes, is the result of this.

And while this was a bad decision that sabotaged the sustainability of regional growth outside Toronto, it’s not the decision that really brought us to where we are today. When Davis commissioned former premier John Robarts to review the Metropolitan government in the mid 70s, he explicitly forbade discussion about expanding Metro’s boundaries. Robarts ignored him and concluded that if Metro’s boundaries weren’t expanded to cover Mississauga, Brampton, Vaughan, Whitby and all parts in between, then the Metropolitan government was going to become meaningless. The regional manager that Metropolitan Toronto was supposed to be would be unable to manage the growth of the region.

Davis ignored Robarts recommendations in this area, and ultimately spelt the death of Metropolitan Toronto.

Now, I can see why Davis made the decision he did. A regional government of the Greater Toronto Area would challenge Queen’s Park for prominence, and Queen’s Park wasn’t about to cut its own throat. However, the problems that have followed: the intensive urban sprawl overwhelming our suburban roads and other infrastructure, the fiscal problems of Toronto itself, can be traced back to this fateful decision.

Ultimately, the problem is that the Greater Toronto Area is not structured properly to meet the challenges of the future without considerable effort. Our municipalities are, at the same time, too large to be responsive to community interests, and too small to effectively deal with regional issues, and the province cannot bring itself to make the structural changes necessary to fix this. The area has grown too big for Queen’s Park to manage, and too big for Queen’s Park to hand it to a regional manager. The only effective solution, unrealistic though it may be, may be divorce. The Greater Toronto Area needs the powers only a province can give it. It may only be able to get those powers if it is considered a province in its own right.

Failing that, we’re left with the task of rolling up our sleeves. The Greater Toronto Area has several advantages in this regard. The municipalities within the GTA have some sense of their common connection and are working together on an ad-hoc basis on a number of issues, from economic development to the expansion of public transit. We also have a provincial government that is currently sympathetic to Toronto’s plight, although timid in its fixes for that plight.

In the early 1990s, there were fears that Toronto would follow the path charted by American centres in the 1970s, with independent suburbs leeching residents and tax revenues from the centre cities and hollowing them out, but this hasn’t happened, and it likely won’t happen now that so many suburban mayors have acknowledged that a strong Toronto core is in their self-interest. Ultimately, and ironically considering this lengthy multi-part series, now is not the time to assign blame. Now is the time to move forward.