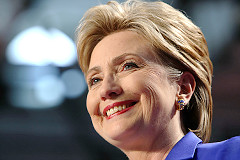 South Dakota and Montana have had their say (and have clearly relished voting in a competitive primary) and the superdelegates have been swayed. It appears as though Barack Obama is very clearly the Democratic Party’s presumptive nominee for President of the United States.

Right now, although Clinton herself has not conceded, the Clinton campaign appears to be making conciliatory noises and people are talking about putting her on the ticket as the VP candidate. And while that would be good for the unity of the Democratic Party, I’m less sure if it would be good for Obama’s campaign, or even for Clinton’s long term ambitions. Indeed, I’d be surprised if Clinton accepted the post as VP.

My thinking goes like this: name the last time that you can remember a vice president building a positive legacy while he was vice president. I’m hard-pressed to do it. We only remember Quayle because he misspelled potato, and when Cheney isn’t shooting his hunting partners, I strongly suspect he’s frozen in carbonite. He may well be the ideological heart of the Bush Administration, but he’s not the one the history books are going to remember. As for Al Gore, he flourished after his vice presidency. The bulk of his green initiatives did not come from his time in office.

On the other hand, Clinton is currently a highly visible senator, and you can remember plenty of senator legacies. John McCain has his name on campaign finance reform. Teddy Kennedy is the elder statesman of the Democratic Party. Orrin Hatch is demonized for his kowtowing to corporate copyright interests, but there’s no denying that he’s had more influence in the American body politic than any vice president since Lyndon B. Johnson.

If Clinton commits to be VP, she commits to not running for the presidency until 2016. She commits to taking herself out of the picture until a time when she’ll likely be seen to be too old for presidential aspirations. On the other hand, if she were to become the Senate majority leader after Harry Reid or, as some pundits have suggested, Chief Justice Clinton, that’s something she’ll take with her to the history books.

Offering Clinton the VP spot is an obvious consolation prize, and there is a danger that it will be seen as only that. It could be seen as a constant reminder of how the Democratic Party almost split apart, and it’s an opening for the media to go scraping around, looking for cracks in that unity. On the other hand, given that the primary race was essentially tied, it’s hard to conceive that Obama would have any choice BUT to offer her the position.

The next move is up to Clinton. If she decides that she’s satisfied with the VP spot, then she should get first right of refusal. The Democratic Party will demonstrate a commitment to reconciliation and will loudly (almost too loudly) present a united front against the forces of John McCain. But if she decides that there’s more that she can do, to help herself and to help a President Obama, then it’s up to her to graciously but loudly turn down the offer, while still throwing her commitment to her former primary opponent and “the next president of the United States”.

The possibilities for her from that point on become almost endless.

So, if not Hillary, Who?

The big problem with a Obama-Clinton ticket, or even a Clinton-Obama ticket is that they’re geographically unbalanced. The tendency for tickets is to bring two constituencies from different parts of the country to symbolically build that majority. The Illinois-New York axis leaves the south and southwest open for McCain.

Bill Richardson would be my first choice for VP. He’s well liked by the party, has considerable foreign policy experience, challenges McCain in his southwestern turf, and is Hispanic. Another suggestion could be Robert F. Kennedy Jr.

But until then, we’re just playing fantasy football, here. Until the Obama campaign commits, there is plenty of time for the parties to surprise us all.