I am Sick of Moral Outrage

(I’m typing this in the cafe at HyVee in Vermillion, South Dakota, taking a break from Vivian and Nora while the grandparent and great grandparents rest (Vivian and Nora are napping). We’ll be staying overnight and returning to Des Moines on Friday afternoon, so regular contact via e-mail won’t be restored until then. If you leave a comment and it ends up moderated, don’t look for it to appear until Friday evening. Many thanks for your patience)

Some Conservative supporters are eating a little crow today. It began over a week ago when the Liberal riding association in St. Catharines ran a tasteless joke about the assassination of Stephen Harper and his wife. It reads as follows:

Prime Minister Stephen Harper was visiting a primary school and he visited one of the classes. They were in the middle of a discussion related to words and their meanings.

The teacher asked the PM if he would like to lead the discussion on the word “tragedy”. So the illustrious leader asked the class for an example of a “tragedy”.

One little boy stood up and offered: “If my best friend, who lives on a farm, is playing in the field and a tractor runs over him and kills him, that would be a tragedy.

“No,” said Harper, “that would be an accident.”

A little girl raised her hand: “If a school bus carrying 50 children drove over a cliff, killing everyone inside, that would be a tragedy.”

“I’m afraid not,” explained Harper. “That’s what we would call great loss.”

The room went silent. No other children volunteered. Harper searched the room. “Isn’t there someone here who can give me an example of a tragedy?”

Finally at the back of the room, Little Johnny raised his hand… In a quiet voice he said: “If the plane carrying you and Mrs. Harper was struck by a “friendly fire” missile and blown to smithereens that would be a tragedy.”

“Fantastic!” exclaimed Harper. “That’s right. And can you tell me why that would be tragedy?”

Oh! Cue the outrage. The Canadian blogosphere was full of these denouncements. Even Warren Kinsella got involved, suggesting that the RCMP should be notified. However, all of that outrage took something of a whack when, just this past couple of days, the Conservatives posted the following picture on their website: 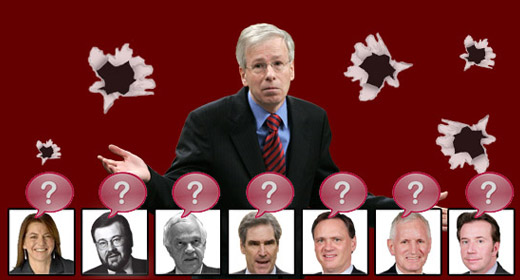 The silence on the Conservative side of the blogosphere is palpable. Some supporters have come forward and said basically, “yeah, the timing of that photo was dumb.” Most of these, I think, didn’t participate in the initial pile-on. But to those who did, who got all aflutter about a joke that any average joe could tell you wasn’t meant to be taken seriously, they need to explain themselves. Why aren’t they as angry over such a tasteless activity? Of course, the answer probably is, “it’s different because it’s my team!” But the real problem is the depth of their outrage over the initial infraction. If they’re sheepish now, then it strongly suggests that their outrage at the beginning was manufactured. And I have to say that I take a dim view of such dishonesty.

Was the original joke tasteless? Yes. But as Stageleft notes, it’s not uncommon. Tastelessness does not mean the end of the world, and I’m at a loss as to why the response was so over the top, unless it was a partisan response.

You may not have noticed my initial response to the Liberal joke because I did not have one, much more than rolling the eyes. Nothing kills comedy more than the refusal to react — shouts of anger are as much music to some comedians’ ears as gales of laughter. I gave the initial infraction the contempt it deserved. Nothing more. Nothing less. I only speak now because the hypocrisy that the second infraction illustrates is worthy of one comment, and it is simply this:

A pox on both your houses.