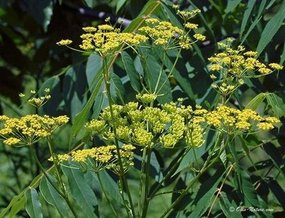 Did you know about the beautiful but highly toxic weed, wild parsnip? If not, check out Chet Scoville’s bitter experience and arm yourself with knowledge.

Wild parsnip, it turns out, is a relatively recent invader to urban and suburban areas; (snip!) The way the damage works is as follows: there’s a toxin in the plant’s sap that is activated by ultraviolet light. Its effect is to render your skin extra-sensitive to sunburns. As a result, what would have been an ordinary tan, or a minor sunburn, can turn into something much more serious: a full-blown second-degree burn. The symptoms, as noted, do not develop right away; the burns take about two days to manifest.

Wild parsnip. Yet another reason to just stay indoors this summer.

Going through the blogosphere, I’ve been bombarded by the debate about what to do with Omar Khadr (see some thoughts from left to right), a child soldier who was captured fighting for the Taliban in Afghanistan, and who now finds himself in the legally questionable domain of Guantanamo Bay.

There seems to be very little middle ground, here. Even by speaking up on this issue, I might be accused, as others have been, of using the case of this young boy to try to undermine the legitimacy of our actions in Afghanistan. And while some on the right seem intent on making an example of this boy, primarily, I think, based on the radical things said by his family, Omar Khadr stands accused by a country that presents itself as the model of the rule of law and democratic freedom, and the charges should be bourne out in the courts.

So, from my perspective in the centre, I say this: given that Omar Khadr is a Canadian citizen, then perhaps he should be tried here. He is, after all, our responsibility, and the Americans could hardly argue that we, as participants in the Afghan theatre, would fail to give the boy a fair trial.

And given that the Supreme Court of the United States has itself said that the continuing Guantanamo detentions are on questionable legal ground, then surely there is no shame in our government taking over responsibility to ensure that justice for a Canadian citizen is served in a full, legal, open and fair hearing?

That’s what I assume Stephen Taylor is saying in his roundabout way: Khadr should face a fair trial. And if the Bush Administration isn’t willing to provide it, then perhaps it’s time we took over the job.

If you choose to write in somebody else’s universe, you choose to play in somebody else’s back yard. And often, as long as you play quietly, and don’t damage the place, or don’t try to start up a profitable business that operates out of that back yard, the owner of the house that backs onto the back yard tolerates your presence. Even smiles benignly on occasion. But if the owner orders you out of the backyard, you have no choice, no legal alternative, but to comply.

That’s never been in question. The courts know it. The fan fiction authors know it. Or most of them do.

And finally, it’s not just the Mounties who always get their man. Good catch guys.

But what I find most interesting about this story (hat tip Saskboy) is the fact that Karadzic was arrested in Serbia, meaning with the permission of the Serbians.

That fact in particular gives me some hope that the area is moving on from the bout of sectarian madness that shook the region over twelve years ago.