(Note: it seems that a strange error is preventing visitors from seeing this site in Internet Explorer. The site loads up just fine in Firefox, and the problem seems to be domain-wide. I’ve put in a support ticket with my webhost. Until then, if you want to look around, please load up this site in Firefox or Opera (I hope)) 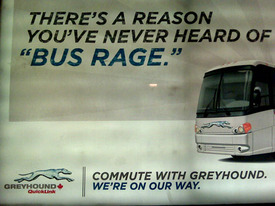 I’ve got to give credit to Nunc Scio for managing to find a lighter side of this atrocity. Yes, definitely, Greyhound should pull that ad. Against all odds, I actually managed to crack a smile over this, and the moment of relief was much appreciated. Thanks, Nunc Scio.

Leaving aside any slander of our fine men and women in uniform, you would think that the title of this entry would be a tautology — isn’t all violence irrational? But then you have the incident earlier this week where a passenger on board a Greyhound Bus went berserk and brutally attacked his seat mate. The violence of the attack is just staggering and I won’t repost it here, but the details are all too easy to find. We’ve read about murders before, but few have been so violent as to leave us agape in the spectacle of its brutality.

One thing that’s interesting is the diverging reactions to this event. Earlier this week, I and other bloggers commented on the story about a gun-toting madman attacking a liberal church congregation. In many cases, sites which didn’t comment on this earlier story did comment on the later story. And I’m not ascribing political blame for this reaction, because I should note that when I heard of the murder on board the Greyhound bus, my first instinct was to say nothing.

So what prompts us to say nothing to one murder and say something to another? Is it the scale of the brutality? Or is it the sheer senselessness of the second crime. Whereas in the first attack, there were related issues to comment on, as the killer made his motives well known. In the second attack, a passenger who had been conversing quite normally with fellow passengers on the trip went beyond any sense of reason, reacting with a violence few animals are even capable of. I had nothing to go on, no motives to pick at, nothing that I could use to explain the tragedy to myself, however inadequate the explanation might be.

For those who did comment, perhaps the complete lack of warning provoked a sense of lost control. Maybe they didn’t identify with the first murder victims (after all, I’m not a Unitarian), but anybody could have been that kid taking his last ride aboard that Greyhound bus.

Predictably, in their attempt to exert some control over this horrible situation, some commentators have suggested that the death penalty be brought back. In this situation, even they note that the death penalty would likely not have been a deterrent. And I acknowledge their reasoning: there seems little hope of rehabilitation here, and so the focus of the justice system can only shift to protecting the rest of society. With the stability of this man always under question from here on in, why spend taxpayers money keeping him alive behind bars? Just end his life and be done with it.

As a longtime opponent of capital punishment, I can only dispute this reasoning. Justice isn’t served by killing the perpetrator, and the calls from some people in the blogosphere to return some of his suffering to him, while understandable, are similarly misguided. There is little likelihood that we’ll be able to connect with this individual, even get him to understand that what he did was wrong. No vengeance can bring the murdered boy back. Instead, we should stand on the calm, rationality that separates the human race from people like this. Putting him behind bars for the rest of his life is enough.

For those who are wondering what the world is coming to as a result of this attack, calm down. Despite the brutality, despite the horror, the rest of the days of our lives will continue to be normal. This event is like a meteor strike in our sense of safety in the world. It was terrible, but probably unavoidable, and we cannot live our lives in fear that this event will happen again. It won’t for most of the days of your lives. Crime rates are falling across Canada and the United States. 99.99% of the time, our lives are safe, and they will continue to be safe.

So many different reactions out there, but they all can be categorized as one thing: human. We’re shocked. We’re horrified. That’s good. We can still be shocked and horrified by things like this. Throughout the blogosphere, we are human. We are different from what this man became. We care. We have the capability of being horrified, of grieving with the victim’s friends and family, and possibly even expressing compassion for the perpetrator himself (while we send him away for the rest of his life). And that’s why we are better than he is.