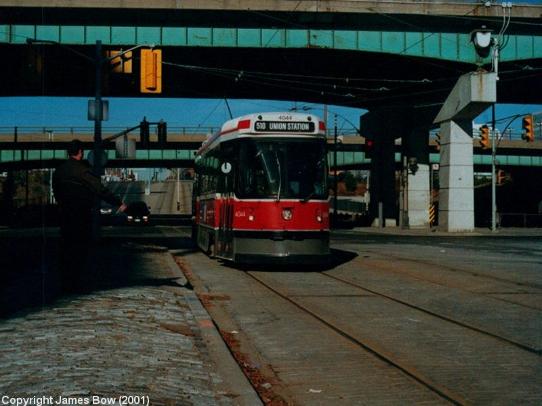 Over at the Metronauts’ website, there has been vigorous debate over the merits of Toronto’s proposed Transit City plan. Is installing 120 kilometres of light rail transit lines across the city (essentially, streetcars on private right-of-way) worthwhile? Or would it be better to rustle up more cash and get subways into the ground? The debate has, in general, been healthy, though I do detect a little bit of animosity towards those who favour the cheaper LRT option, and even to those who successfully convinced the TTC, back in 1972, to abandon its policy of eliminating the streetcar altogether from the streets of Toronto.

A debate is good, although I’m not sure if it’s healthy to try and divide transit advocates as either “LRT fanatics” or “subway advocates.” Even the word “railfan” has been used to describe those who favour maintaining and improving streetcar service, with the insinuation that our vision is being blinkered by our train conductors’ caps. That’s not what I’m about. Yes, I consider myself to be a railfan, but I think in terms of this: a railfan makes me a fan of streetcars, AND LRT networks, AND subways. At their core, they are essentially the same thing.

A streetcar, an LRT and a subway are all basically a box that runs on rails. All other differences are superficial, whether the motive power is provided by overhead wire, third rail or linear induction. It doesn’t matter. All share the advantage over rubber-wheeled transit: fixed routes guiding the vehicles through narrow right-of-ways, the ability to operate larger vehicles, the ability to operate larger vehicles in trains, all providing higher capacity than what bus service can offer. The only real difference when we’re talking about these modes is the conditions they’re run in. Streetcars generally operate in mixed traffic, subways are fully grade separated, and LRTs can face conditions that range between these two extremes.

So, I’m not opposed to subway construction per se, as long as the end result properly serves the neighbourhood it operates through. I don’t fear that a Queen subway will destroy Toronto’s inner-city streetcar network, as long as I can still use the Queen subway to access services along Queen. A Queen subway built to Sheppard subway standards, with station stops between a kilometre or two apart, wouldn’t be good for Queen Street. A Queen subway built with station stops spaced akin to the Bloor-Danforth subway would serve local traffic much better. But could we afford that?

And despite my strong advocacy for the Transit City LRT plan, I can prove that, as recently as five years ago, I believed subways were the better option for the northern suburbs, or even for a downtown relief line. Have a look at this Transit Toronto editorial I wrote back in December 2000. Have a look at this blog post from 2002 or this post from 2003. As recently as five years ago, I strongly believed that the way forward in improving public transportation in this region was in new subway construction. Now, I’m not so sure.

But if you build a subway for below 20,000 passengers per hour, you’re building an expensive piece of infrastructure with a capacity well above the demand for its use in the foreseeable future. The Sheppard subway cost around $900 million for 6.2 kilometres of line. It only carries about 40,000 passengers per day — about as much as the King Streetcar. Since 1985, we have been opening a number of new stations that are among the least used of the rapid transit system. Would not their traffic be handled better by something less expensive, less overbuilt?

Back in the mid-to-late 1970s, planners for the TTC and the City of Toronto came to believe that subway construction was a thing of the past. The dense areas that were best suited to subway development had, by and large, been served. Despite this, the city was growing, and large areas of new suburb were springing up far from any rapid transit route. The Bloor-Danforth subway extensions to Kipling and Kennedy in 1980 were touted (touted!) as the last bit of new subway construction for a while, as planners wrestled with the question of how to get rapid transit service to the suburbs without spending as much as new subway construction cost.

In 1975, we thought we had a plan: streetcar trains operating on exclusive rights of way could extend rapid transit service deep into the new suburbs, meeting demand at a fraction of the cost. A new line in Scarborough was proposed to tout this new service, connecting the eastern end of the Bloor-Danforth subway to the Scarborough Town Centre. Unfortunately, Ontario premier Bill Davis essentially vetoed this plan, preferring to use the new line as a showcase for a high-tech rapid transit solution, using linear induction motors to do what the streetcars could do.

The redesign of the Scarborough RT from a traditional dedicated streetcar line into a fancy Intermediate Capacity Transit System (tm) ran into excessive cost overruns that made the line almost as expensive as a subway to build. The re-use of streetcar design specifications that had already been built into the line didn’t sit well with the untested linear induction cars, and as a result additional tens of millions were spent to fix the problems. The failure of the Scarborough RT to cross the capacity gap between mixed traffic streetcar and low-end subway led to subways being brought back as the preferred vehicle of choice for a new set of rapid transit lines to the suburbs (a plan called Network 2011), but the idea of intermediate capacity transit service hadn’t failed — just the idea of using new high tech equipment when low tech technology could have served.

And what happened next, of course, is history. The politicians waffled, and various changes of government kept shovels out of the ground for five years. The Sheppard subway, which was supposed to open in 1994, wouldn’t start construction until after that year. But I as a transit advocate still believed in subways back then. As late as 2002, as we waited for the Sheppard subway to open, I was convinced that a new government in Queen’s Park was all we needed, to spend the money to get the state of good repair projects dealt with, and then invest $200 million more per year, to ensure the construction of one kilometre of subway each year, every year. I thought that was politically feasible. Turns out I was wrong.

I’m not a young man anymore. It’s becoming clear to me that the subway network that was proposed in my childhood won’t be available to me until after I retire, and that’s just wrong. Having waited two and a half decades for dozens of kilometres of new subway construction, of which barely eight have materialized, I’ve had to ask myself some hard questions about the likelihood of such a subway network coming to pass. Politicians do not seem to have the political will to spend the tax dollars required to keep our public transit networks in a state of good repair, much less get the Greater Toronto Area the network it deserves, and we the voters of Ontario have failed to generate that political will for them. That’s what we need to fix.

So, what can we build? What is possible? What can we afford? Is it easier to raise, say, $13 billion for new projects that are needed right now, or can we raise $26 billion and overbuild for the future? These questions today are especially pressing given how much delay we have to catch up on. So, I return to the original question, which dogged Toronto planners back in the 1970s, which the Ontario government failed to answer properly, putting us in the situation we’re now in: we have limited money. How can we get rapid transit service to more places in the GTA without spending the money required to build that network in the form of subways?

The answer is the same now as it was in 1975. Streetcars on exclusive rights of way work. They work. They work cheap. We can build them and save money. We just need to generate the political will to take that final step.