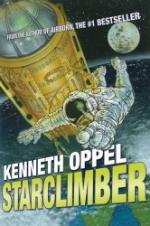 Please note that here there be spoilers. Do not read on if you don’t want to be spoiled.

I have had the great privilege of following Canadian author Kenneth Oppel’s career ever since he won the Governor General’s Award for Children’s Literature for Airborn back in 2004. Okay, I haven’t seen his career taking off (he’s had over twenty books published since 1985, when he published Colin’s Fantastic Video Adventure at the tender age of 18), but I’ve seen him soar, and it’s fair to say that I’ve become a fan of the book series that was launched by Airborn. I devoured its sequel Skybreaker and I eagerly awaited the arrival of the third book, Starclimber.

Airborn features 15 year old Matt Cruse, a cabin boy on board a titanic airship called the Aurora, cruising the skies in an alternate Edwardian Earth where Zeppelins are the primary form of long-distance travel. He meets and falls in love with a young socialite named Kate DeVries, who is struggling to overcome the restrictions of her sex and her class to engage in serious scientific study. What follows is a wonderful swashbuckling romance, with strange cat-bat-like creatures, sky pirates, and a forbidden romance between a poor boy and a rich girl, all told in the first person by Matt himself.

Kenneth Oppel ably captures Matt’s voice, such that Matt becomes the centrepoint of the series. Oppel is also an excellent world builder, constructing the alternate Earth with only a few well-chosen details. And the themes behind his work, of overcoming your own limitations and reaching for the stars, shine through and give these tales a compelling moral centre. It is a very affirming book series, and one of my favourites.

Skybreaker built on Airborn by building the romance between Matt and Kate, by ageing them a little and giving them some very human flaws (including jealousy). The confines of their restrictions of class and sex press tighter on them, such that Matt is ready to go on a nearly suicidal search for a ghost airship 20,000 feet above the Antarctic, in the hopes the salvage rights will make him rich enough not to have to worry about his humble origins ever again. But, of course, it’s not nearly as simple as that, and what Matt truly needs, and eventually gets, doesn’t glitter.

Which brings us to Starclimber, the third book in the series, and perhaps Kenneth Oppel’s most challenging. In conversation with him, he told me that he always strives to chart new territory in his novels. Characters and storylines cannot remain static lest they get stale. It’s an approach I applaud, precisely because it’s so risky. So I’m pleased to say that I enjoyed Starclimber a lot, though honestly I think my favourite book of this series remains Skybreaker.

In Starclimber, Matt and Kate are now seventeen. Matt is two years in his courses at the Airship Academy and well on his career path toward eventually becoming an officer. Kate is studying biology at the Sorbonne and is fighting hard against challenges to the authenticity of her discoveries by particularly stuck-up members of the scientific establishment. The two are having an almost idyllic time together, able to meet often while Kate’s chaperone, Miss Simpkins, looks the other way. Matt almost dreads bringing the idea up, since a part of them fears that it might puncture what they have, but thoughts of marriage are now dancing in his head.

However, Matt and Kate’s splendid isolation is punctured. Matt’s work on France’s Celestial Tower — an attempt to build their way into space with a 100 kilometre tower, is almost sabotaged by a group of terrorists known as the Babelites. Worse, Kate is summoned home to Lionsgate City (Vancouver) by her parents. The time has come for her to step out socially and find a suitable husband.

Fortunately for Matt, he and Kate are contacted by the Canadian government, who are secretly competing with France in the space race, having set up a space elevator called the Starclimber in a secret location in the equatorial Pacificus. Kate is welcomed aboard as an expert in the unusual biology of the creatures that she’s discovered at high altitudes. Matt, thanks to his heroics in the previous two novels, is welcome to train to see if he has “the right stuff” to “go where no man has gone before.” There are twists and turns, but of course Matt makes it onto the ship. Kate, however, has to make sacrifices in order to convince her parents to let her on board — including agreeing to marry a rich bachelor named James Sanderson, and shatter her relationship with Matt Cruse.

Starclimber has all of the things that make Airborn and Skybreaker great: Matt’s voice is perfect, the touches of humour are wonderful, and all of the characters are well drawn. Oppel’s action sequences keep you at the edge of your seat, and he exercises his imagination yet again with some of the otherworldly creatures he devises for the tale. And while some of the physics of his novels make my wife (who has a physics degree) scream (Erin to Oppel: buoyancy is not the same as weightlessness, and you simply cannot create a new element at the top of the periodic table), it all feels authentic enough to draw you into Cruse’s world and make you root for the characters.

But Matt Cruse’s narration, while the centrepiece of the series, could be its achilles heel in Starclimber. Oppel couldn’t abandon it without essentially separating Starclimber from the rest of the series, but Oppel struggles a little with the rather linear nature of Starclimber’s narrative as told by Matt. We have the Babelite threat, but it dissipates as the Starclimber moves into space; we have Matt’s brutal training regimen, which he survives, then we have the ascent of the Starclimber and the creatures we meet on the way, and finally we have the Starclimber’s Apollo-13-esque return to Earth. Unlike Airborn and Skybreaker, Matt’s story doesn’t coalesce around a single villain, a single threat, or a single decision, and the result is a little unsatisfying.

The reason for this, as I see it, is that Matt, for better or for worse, has won. His mother and sisters no longer have to worry about their future. He himself is assured a decent career as an officer aboard an airship. Just being on the Starclimber alone is sure to make his resume irresistible (I’m pretty sure he’s caught the eye of airship magnate Otto Lunardi, who will be looking for officer material to replace Matt’s mentor, the retiring Captain Walkin). Sure, it would be tragic if Matt couldn’t marry the love of his life, but he could conceivably recover from that, given that he no longer has any economic restrictions on what he can achieve.

Kate, on the other hand, has to agree to a marriage she doesn’t want in order to pursue a career her parents disapprove of. She has to fight for an iota of acceptance from the stuffy and predominantly male scientific community, and she isn’t even allowed to vote. And if she fails in her task of finding a way around her parents’ restrictions, she’s doomed to a loveless marriage and an unfulfilling career as a homemaker. To my mind, that’s a fate worse than any Matt could have reasonably expected to look forward to in Airborn. Worse, as Kate faces her uncertain future, she’s given a tempting offer — a possibility that her marriage might just allow her to pursue her chosen career. She only has to break Matt’s heart.

There’s no question which character has more at stake in this tale, but because the focus of the story remains on Matt, we only see Kate’s struggles peripherally. A part of me really wanted to get inside Kate’s head to see the mental agony that she was surely going through. But Oppel had to make a stylistic decision that felt right to him, and I won’t fault him for what he chose.

Despite these criticisms, I loved Starclimber, and I loved the ending, which I won’t spoil for you, and I’m happy to say that there’s still room for a sequel if Oppel decides to go for it. Despite what Kate and Matt have chosen to do, there’s still her parents disapproval to overcome — and possibly even Matt’s mother’s disapproval as well. I’d be interested in seeing that, even if Oppel has to struggle to find another place to take Matt in this world he has created.

I suspect that Oppel, now that he has pursued two different series (this and Silverwing) for the past few years, wants to strike out into completely new territory with new characters, and I look forward to that. But the romantic in me hopes that Kate and Matt’s journey isn’t done yet. I look forward to returning to visit old friends.